If someone asked, “Hey, remember the time John Cleese visited the Museum and blew glass?” you could be excused for doing a double-take and thinking “What, when?!” Well, strap in, because we’ve got a story for you, and the person who tells it best is William Gudenrath, Resident Advisor at The Studio of The Corning Museum of Glass.

Over the 26 years that Gudenrath has worked at The Studio, many famous faces have come and gone, but one has always stood out. You might know him as the brave but foolish Black Knight from Monty Python and the Holy Grail, or the incompetent hotelier Basil Fawlty, or simply as the legendary English actor and comedian, John Cleese.

END_OF_DOCUMENT_TOKEN_TO_BE_REPLACED

In 1850, census takers recording information in Sandwich, Massachusetts, home to the famed Boston & Sandwich Glass Company, failed to record a single occupation for a female resident. The activities of the women of Sandwich were not yet deemed worthy of recording.

At the turn of the 20th century, the number of women entering the workforce began to rise. Growing alongside this trend was the demand for glass. Some women found a foothold in the thriving glass tableware industry, but, overall, they were limited in the tasks they performed. They were almost entirely kept out of glass blowing and pressing, coming into the production line when the glass left the furnace room. The wide range of jobs that women held were largely unskilled or low-skilled. Unwilling to accept women into lengthy apprenticeships, factories hired women to perform tasks that required minimal training. The women who worked at glass factories at this time were young, in their late teens and 20s, and tended to leave the workforce when they married, allowing only a handful of years to work.

For all these reasons, and more, women’s stories were often left out of histories and documentation, making it difficult to learn about women of the past.

END_OF_DOCUMENT_TOKEN_TO_BE_REPLACED

He sat casually in the corner of an office workspace, just waiting for his unlikely rise to fame. Born of sand and fire during artist Catherine Labonté’s live stream demo, this goofy-looking character could make you smile just by looking at him. And really, what more could he have hoped to accomplish than spreading simple happiness to an office filled with museum marketing employees? Then COVID-19 hit, and those employees packed up their desks and left to work from home for the foreseeable future, leaving Penguin Pierre in solitude—with no more faces to light up.

Then, when Chicago’s Shedd Aquarium shared videos of a penguin called Wellington waddling around their empty spaces; inspiration struck! Only, Pierre couldn’t waddle around the Museum… he’s made of glass. Except, could he?!

END_OF_DOCUMENT_TOKEN_TO_BE_REPLACED

This year marks the 100th anniversary of the ratification of the 19th amendment to the U.S. Constitution giving American women the right to vote. To commemorate this anniversary, The Rakow Research Library at The Corning Museum of Glass explores stories of women in the glass industry during this critical moment in history through this special blog series.

In 1900, city skylines were exploding upward. People were taking to the streets to march and organize for equal pay for equal work and a 48-hour workweek. In the first decades of the century, factories were mechanized, and the first World War wrenched able bodies from the workforce. Between 1900 and 1920 machines and cultural changes transformed American industry.

END_OF_DOCUMENT_TOKEN_TO_BE_REPLACED

The Corning Museum of Glass may be closed temporarily to guests and staff alike while the COVID-19 pandemic affects our community, but that doesn’t mean the work stops. Our staff and their families have been hard at work in many wonderful ways to ensure that they are doing everything they can to protect our institution, our collections, our communities, and ourselves while maintaining our position as a world leader on glass.

Here are just a few of the things that we’ve been up to.

1. When the Museum temporarily closed to the public on Monday, March 16, 2020, and asked its staff to work from home, an assessment was made of ways that we could continue to operate and send aid to the local community. Our Operations team searched the campus and located 2,000 masks, 1,000 gloves, and some safety glasses, that could all be donated.

END_OF_DOCUMENT_TOKEN_TO_BE_REPLACED

Are you at home and in need of new sources of inspiration? Have you already exhausted your to-do list of house projects, cleaned the kitchen multiple times, finished several books, and asked everyone you know what’s good on Netflix? Well, don’t worry, The Corning Museum of Glass has some fresh ideas for you and the whole family.

We’ve searched our blog archive for a selection of unique things you can do from the comfort of your own home while still practicing social distancing, so let’s see what’s on the agenda for today.

Perhaps it’s time you dusted off all the old Pyrex you have stored away in various cupboards and hidden in the attic and gave everything a thorough clean.

Read this blog about how to correctly clean your Pyrex collection and restore everything to its former glory. Maybe you’ll want to start baking afterward!

END_OF_DOCUMENT_TOKEN_TO_BE_REPLACED

We are in the midst of an unprecedented moment for museums and cultural institutions across the country. With widespread closures due to COVID-19, our most direct way to reach the public is no longer a viable option. We are all doing what we can to make sure the visitors who would normally walk through our doors know that they can still engage with us from the comfort of their homes.

Currently, The Corning Museum of Glass is closed, and all scheduled classes, events, and programs are canceled until further notice. It’s vital that we do our part to promote social distancing and limit the spread of COVID-19. And while you’re doing your part to stick close to home, we know you’ll be in need of some educational entertainment.

With our vast and myriad collection of online resources, we’ve got you covered.

END_OF_DOCUMENT_TOKEN_TO_BE_REPLACED 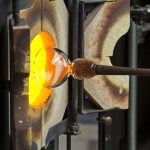 The Corning Museum of Glass is thrilled to share news of an exciting collaboration on the forthcoming Netflix series, Blown Away, which will bring the art and beauty of glassblowing to television screens around the world. A visually compelling process often described as “mesmerizing” and “captivating,” glassblowing has never been the subject of any major TV programming—until now.

The art glass competition show created by Marblemedia, an award-winning entertainment company based in Toronto, Canada, Blown Away features a group of 10 highly skilled glassmakers from North America creating beautiful works of art that are assessed by a panel of expert judges. One artist is eliminated each episode until a winner is announced in the tenth and final episode. A co-production with Blue Ant Media of Toronto, Blown Away will air on the Makeful channel in Canada before coming to the Netflix platform worldwide later this year.