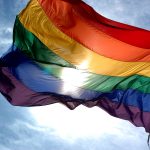 This June, The Corning Museum of Glass and I Love NY! celebrate the 50th anniversary of The Stonewall Uprising. This is part two of a two-part blog post that details the impact Stonewall has had on our world, including the world of glass. In Part 1, we revisited the historic events surrounding Stonewall, the birthplace of the LGBTQ+ movement for equality. In Part 2, we look at some highlights from Glasss, Honey! The Corning Museum of Glass Pride Tour (June 16 at 1:30 and 2:30 pm; June 29 through July 3 at 1 pm). Glass emerged as a popular art material in the Stonewall era, and is a medium for LGBTQ+ artists to express their voice and identity.

For much of its 3,500-year history, glass was not used as a material for purely artistic pursuits. It wasn’t until a series of 1960s workshops led by Harvey Littleton, a native of Corning, New York, with the help of Dominick Labino that glass emerged as a more readily available and popular material for expressing ideas. This period of increased attention on glass as an art material became known as the Studio Glass Movement.

The use of glass as a more common art material coincided with major shifts in the cultural landscape of the late 1960s and early 1970s: Hippie culture rebelled against U.S. involvement in the Vietnam War; people of color staked their claim on long-denied civil rights; the Feminist Movement empowered women to take control of their own bodies and decisions; and as mentioned in Part 1, LGBTQ+ people emerged from the historic events at Stonewall to claim a life free from harassment and discrimination.

In the midst of these historic movements, glass became a material that presented artists with seemingly limitless creative opportunities.

Unlike the other artists in this blog post, Henry Halem is not LGBTQ+.  His Ravenna Grand Jury/Masked Bandit (1970), however, exemplifies the doorway opened by the Studio Glass Movement for artists to express points of view, in glass, about current events.

In 1970, a year after establishing the glass program at Kent State University in Ohio, Halem witnessed four university students shot to death on campus by members of the National Guard during a demonstration against the Vietnam War. The students were unarmed. The gunmen were acquitted by a grand jury in Ravenna, Ohio.

In Ravenna Grand Jury, a disfigured, ghostly face stands in for the jurists. Not only masked, the face’s eyes are hidden and unable to accurately see what is happening around them.

Building on the energy of the Studio Glass Movement, LGBTQ+ artists continue to use glass as a medium to address contemporary concerns.

Glass is one of many materials Fred Wilson uses. As an artist of color who happens to be gay (his partner, Whitfield Lovell, is also an artist), he knows what it’s like to feel invisible. He was once invited to give a gallery lecture at the Whitney Museum of American Art. He wore a guard’s uniform (he had worked as a museum guard earlier in his life) and stood in the gallery where the lecture was scheduled. As the crowd gathered, no one noticed or recognized him.

Wilson says of his work, “I use beauty as a way of helping people receive difficult or upsetting ideas.”

In To Die Upon a Kiss, he contracted Venetian glass workers to create an opulent glass chandelier that looks as if the color is being drained from it.

As Wilson studied the history of Venice, he found that images of black people, not uncommon during the Renaissance, later largely disappeared except for portrayals in decorative “blackmoor” servant figures. Like the black pigment seeping from the extravagant chandelier, Wilson points to a history of reducing people of color to decorative objects.

Even after glass gained a stronger voice in the art world, glassmaking was still largely rooted in the hyper-masculine world of factory-made glass. Female artists often ran into barriers and prejudice as they worked with male colleagues at the furnace.

Deborah Czeresko uses her talents to poke fun at the glass world’s hyper-masculine history. In Meat Chandelier from 2018 she uses complex Venetian glass factory techniques, traditionally passed down generation to generation by men, to work glass into shapes that look like meat. As Czeresko puts it, “it’s a reflection of the traditional male-dominated glass hot shop as a ‘sausagefest.’”

Public monuments often commemorate a person or event from one point of view, usually that of the dominant culture. Artists, like Támas Ábel, offer other points of view to consider.

In 2017, Ábel translated Gilbert Baker’s iconic design of the 1979 Pride Flag, now in the collection of The Museum of Modern Art, into a reflecting mirror. He then recorded video of himself shining Baker’s design on to two stone monuments: the Washington Monument in Washington, D.C., and the Millennium Monument in Budapest, Hungary (Colour Therapy). Both structures honor military heads of state. Each dominates its landscape with a masculine (phallic) form to tell the story of conquerors.

Ábel’s act of symbolically scaling the monuments, recording it on video, and presenting the experience to the public, layers more inclusive and peaceful dimensions to the large structures. Abel’s intervention is impermanent, but it can be repeated quickly and often. Through digital means it can be duplicated and widely distributed.

Two of the artists mentioned in this blog post, Deb Czeresko and Támas Ábel, are part of The Corning Museum of Glass exhibition New Glass Now, a worldwide survey of what is currently happening in glass art and design. Visit the exhibition and you’ll find that glass is still being reimagined and used to explore the contemporary world. The spirit of the Stonewall Era and pioneering glass artists remain with us and show no sign of slowing down.

Don’t miss Pride Month celebrations at The Corning Museum of Glass, including tours and Make Your Own Glass projects!