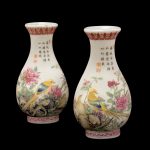 The Museum’s curatorial staff are responsible for the care, display and research of more than 50,000 objects. The Asian glass collection—small but extremely important—was one area in need of more research and evaluation. That’s where Dr. Shelly Xue comes in.

Dr. Xue arrived at the Museum in November 2018 as the Carpenter Foundation Fellow for Asian Glass. She came from Shanghai where she is on sabbatical from her position as Associate Professor for Glass and Director of the Studio at Shanghai Institute of Visual Art. Dr. Xue earned her Ph.D. from the University of Wolverhampton in the U.K., where she researched the development of glass as an expressive medium in China through direct contact with Western methods of glassmaking and decorating. She has published four books and has lectured around the world. Dr. Xue is also a glass artist and has work in the collections of the Victoria & Albert Museum in London and the Bristol Museum & Art Gallery. (You may have seen the video of one of her works being broken in her solo exhibition in 2013.)

Six months into her year-long fellowship, I was able to chat with her about her work at The Corning Museum of Glass.

What sort of work are you doing at the Museum?

The principal aims of my work are to review the current information on the Museum’s Asian collection and to recommend areas of expansion. I examine objects in the collection, and update the database as needed. I’ve been doing evaluation and research on some of the most important objects in the collection. I collaborate with our conservators, scientists, and glassmakers by using scientific methods to study and understand the technology of making and coloring glass, and the techniques of forming and decorating glass in Asian countries. I’m also surveying the Asian collection to identify gaps and make recommendations for acquisitions.

How did glassmaking start in China and what, if anything, makes Chinese glassmaking different from Western glassmaking?

The history of Chinese glassmaking dates back to the Western Zhou period (1046 BCE-771 BCE) of the Zhou dynasty (1046 BCE-256 BCE). Glass beads were the earliest form of glassmaking and progressed to ritual and burial objects that imitated precious stones such as jade. It was not until the Qing dynasty (1644-1911) that glassmaking in China reached its peak.

Glass was always regarded as a foreign material in China, as opposed to the more familiar jade and ceramic. Glassmaking, forming, and decorating followed the ideas of other traditional arts and crafts within a highly-formatted pattern and hierarchy. The best-known characteristics of Chinese glass are its simple form, monochrome color, and opaque or translucent effects.

Cased and cameo-carved glass, developed from lapidary [the art of cutting stones] working of jade production in the 18th century, is a significant contribution of the Qing dynasty to Chinese glass.

Is there anything that stands out about the Museum’s collection of Asian glass?

Asian glass has been a part of the Museum’s collection since its founding in 1951, and the collection includes objects from a broad expanse of history and geography, including China, Japan, Korea, India and southeast Asia.

Several examples of Qing dynasty Chinese Imperial glass in the Museum’s collection may be considered among the most important in the world. These include a pair of enamel-painted Qianlong vases (53.6.1); a pair of cased and cameo-carved Qianlong candlesticks from an altar set (86.6.2); a cased and cameo-carved Qianlong bowl in a unique jade green color (79.6.27); a Qianlong realgar [ruby sulphur] vase (67.6.1); and some rare examples of diamond-point and wheel engraved glass cups (76.6.1) of the Kangxi period (1622-1723) and the Yongzheng period (1723-1735).

Do you have a favorite object?

It is really hard to decide among all these objects. My favorite object is a pair of Kangxi diamond-point engraved cups.

Besides being a professor and museum professional, you are also an artist. How does your research into the history of glass influence your work as an artist, or vice versa?

Whether it is research or practice, for me, the two are definitely interrelated.

I first started to work with glass as an artist in 2003 when I was trained in different glassmaking techniques. Since 2006, my studies in the UK opened another door for me to the historical research of Chinese glass.

My knowledge and experience of glassmaking [as an artist] enable me to add another dimension to my research. I started to provide suggestions about how surviving examples were made by looking at the clues embedded in the objects, and by comparing their techniques with Western parallels and other craft practices. Then I tested my theories by making reproductions of key examples. For instance, the examination and reproduction of the five types of Chinese foot-rings [a glass ring to hold bowls and cups with rounded bottoms] of the 18th century shows how it may reveal the technique used to create the whole glass, how it might provide evidence for dating individual items, and how Chinese glass in the Qing dynasty was influenced by Western practice and developed from blowing to carving.

In turn, the historical research and museum collections helped me to have dialogues with ancestors, to discover their ingenuity and innate understanding of the material, and to inspire my personal practice. For example, in the Qing dynasty, glassmaking was largely inspired by Chinese porcelain, in terms of form, color, and decorative patterns. In order to examine how contemporary kiln-formed glass could benefit from sharing traditional ceramic techniques, I tried to create clay prototypes by pottery throwing for lost-wax casting in my glass work Vessel Series, and a series of different wax versions then developed from the same clay prototype.