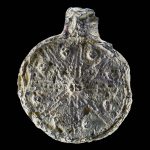 Have you heard that ancient people didn’t see the color blue, because there is no word for ‘blue’ in many ancient languages? This idea shows up occasionally in popular media, although scholars have demonstrated repeatedly that the Greeks and other ancient people certainly recognized and saw the color blue, although they described, and perhaps even experienced, the color differently than we do today. But these studies do show that language shapes the way we see and experience the world.

So what does this have to do with glass? Ancient people did not have a separate word that referred specifically to the material we call “glass” until the Romans began to use the Latin word vitrus in the first century B.C. The first century B.C. was a critical time in the history of glass: the new technology of glass blowing was about to take off, and more people were drinking from glass cups, wearing glass jewelry, decorating furniture and walls with glass inlays, and playing dice and board games with glass tokens.

Glass certainly existed before the first century B.C. (just as the color blue did), and people knew what it was: they just used different words and concepts to refer to it. During the first several centuries of glass history, people referred to glass based on its similarities with other materials and its physical properties such as color, hardness, and transparency. Egyptian hieroglyphs described glass as “the stone that flows.” Cuneiform tablets found in Mesopotamia used the same word for glass and lapis lazuli, a type of opaque blue stone. Tablets from Mycenean palaces in Greece referred to glass simply as a “dark blue material.” Finally, Greek literary texts written about 1,000 years later, in the 400s BC, described glass as “molten stone.”

All of these terms demonstrate the close relationship between glass and stone, particularly lapis lazuli, in the ancient mind. Lapis was a valuable material in the ancient world due to its rich color and relative rarity, because it had to be brought to Egypt and Mesopotamia from Afghanistan. While today we tend to think of glass as colorless and transparent, most of the earliest glasses were opaque and blue, showing visual association with lapis lazuli and turquoise, another semi-precious stone.

Pictured below: Early blue glass objects in The Corning Museum of Glass collection. The pendant and necklace were originally vivid cobalt blue, but their surfaces have changed appearance due to weathering.

Nor was glass considered a fake or cheap version of lapis, turquoise, rock crystal, or other stones. Rather, people thought of glass as a type of stone with a special property: the ability to melt and pour. Some Mesopotamian texts even described glass as “lapis lazuli from the kiln,” opposed to the stone lapis lazuli, which was “from the mountain.”

If you ask a modern scientist what glass is, she will likely describe the material as “a solid with a non-crystalline structure, which continuously converts to a liquid upon heating.” But this definition doesn’t make any sense in a time before microscopes and the Scientific Revolution. Our language, as well as our experiences, shape the way we see and interpret the world around us. Instead, if you asked an ancient Egyptian what glass is, he would say “it’s the stone that pours, of course!”