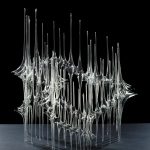 Explore humanity’s greatest inventions and discoveries in a new interactive online project by Google Arts & Culture, in collaboration with The Corning Museum of Glass.

People have shaped and molded glass for ages and experimented with improving the basic recipe for glass. But it took innovations in modern chemistry to make a new glass for a new era possible. When German glassmaker Otto Schott (1851-1935) discovered that adding boron to glass recipes produced a borosilicate glass resistant to thermal expansion, he paved the way for new inventions.

Today The Corning Museum of Glass announces its first ever online exhibition featuring the journey of discovery that took glassmaking from a centuries-old craft to a modern material that shapes our everyday lives. The exhibition, New Glass for a New Era: Borosilicate Glass, is launched in partnership with Google Arts & Culture’s Once Upon a Try—the largest online exhibition about inventions and discoveries ever curated. Collections, stories and knowledge from over 110 renowned institutions across 23 countries are now brought together, highlighting millennia of major breakthroughs and the great minds behind them.

“As long as you’re paying attention, there’s no such thing as a failed experiment—you can always learn from what nature tells you,” says Corning Museum’s chief scientist Jane Cook. “The 200-inch disk is a perfect example of how scientists have learned from 20 tons of failure.”

And artists have been inspired by the innovation of borosilicate glass too. See how the properties of this glass led to larger and more intricate compositional works in glass sculpture by artists including Věra Lišková (1924-1979), Ginny Ruffner (b. 1952), and Geoffrey Mann (b. 1980).

“Glass changes the world, and borosilicate glass captured our imagination to bring new ways of working at home, in the lab, and in the artist’s studio,” says Eric Goldschmidt, properties of glass programs supervisor at The Corning Museum of Glass. “Borosilicate glasses have allowed artists to achieve even more complex and remarkable works and it’s amazing to see what we can still possibly achieve with this material.”

As part of Once Upon a Try, everybody can now explore more than 400 interactive exhibitions that pay tribute to humanity’s greatest leaps in science and technology progress, and the visionaries that shaped our world, as well as tales of epic fails and happy accidents. Once Upon A Try also lets you dive into Street View to tour the sites of great discoveries, from deep underground inside CERN’s Large Hadron Collider, to high in the sky onboard the International Space Station. Zoom into more than 200,000 artifacts in high definition, including the first recorded map of the Americas from 1508, and Albert Einstein’s letters, never before published online.

Explore Once Upon a Try on Google Arts & Culture (g.co/onceuponatry) or using the iOS or Android apps, and join the conversation with #onceuponatry.

You can also explore the inside of The Corning Museum of Glass on Street View and find high-resolution images from the Museum’s collections as part of our collaboration with Google Arts & Culture https://artsandculture.google.com/partner/corning-museum-of-glass.