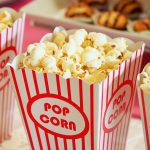 If you are a red-carpet buff, you are no doubt anxiously awaiting the 91st Academy Awards ceremony and the chance to find out what films and film stars the Academy chose to honor this year with the golden Oscar statuette. If you’ve already watched all of the 2019 nominees for best films and are still hunting for something to see, enjoy this selection of movies that feature glass in a starring role.

**As a librarian, I feel compelled to foist this fun fact about Oscar on you: It was supposedly named by Academy librarian Margaret Herrick because the statue looked like her Uncle Oscar. **

The Age of Innocence (1993)
Winner, Best Costume Design. Welcome to the extravagant luxury of Knickerbocker society, home to the Astors and Vanderbilts and Morgans. Martin Scorcese’s film is full of beautiful glassware, in luxurious historical settings. Be prepared to drool.

Heart of Glass (1976)
Best cinematography at the German Film Awards. Werner Herzog’s film tells the story of a small town in Germany whose residents go to great lengths to recover the lost secrets to making ruby glass. Glassmaking scenes were filmed in Erwin Eisch’s glass factory.

Moonraker (1979)
Nominated for Best Effects, this James Bond movie depicts the Venini Glass showroom and factory, showing the Coppa Barovier, a famous glass bowl which The Corning Museum of Glass owns a copy of (70.3.1). If you like seeing lots of fine, expensive glass broken, this movie is for you!

My Life as a Dog (1987 US release)
Nominated for Best Director, Lasse Hallström’s film about a troubled young boy separated from his family includes scenes from a Swedish glass factory.

Oscar and Lucinda (1997)
Nominated for Best Costume Design. Glass is incredibly important to the plot of this intriguing movie where Prince Rupert’s drops and a glass church both have critical roles.

Excuse My Glove (1936)
For fans of stained glass AND boxing, you can’t beat the story of a young guy who loves stained glass but gets thrown into the world of boxing at a local fair. Starring real-life boxer Len Harvey.

The Glass Slipper (1955)
Leslie Caron stars in a version of the classic Cinderella story. You can guess where the glass comes in … right?

Die Hard (1988)
Okay, this may be cheating, but the scene where Bruce Willis treads barefoot on glass while trying to suss out wicked European terrorists is such a classic. I had to include it. Sue me.

Shamus (1973)
Fans of Burt Reynolds will like this movie, as will fans of Louis Comfort Tiffany. Of interest are scenes of a Tiffany window, now in the collection of The Corning Museum of Glass (76.4.22). The window was created in 1905-1906 for a house on the Hudson called Rochroanne. The house was sold in the 1920s and eventually donated around 1970 to the Roman Catholic church which rented it out for various purposes, including the making of this movie.

Mirrors (1990)
An old mirror is controlled by a demon, causing it to drip blood and emit black magic. Who knew mirrors could be so dangerous?

Mirror Mirror (2008)
This time, mirrors provide the means of travel for the evil force moving throughout the movie.

Snowmaggeddon (2011)
No, I haven’t seen this, but I really, really want to. Who could resist a plot consisting of an Alaskan town in danger of destruction by a mystical snow globe? Not me!

Early to Bed (1936)
The protagonist in Early to Bed works for the Matchless Eye Co., maker of glass eyes. His sleepwalking gets him into lots of trouble as he tries to land a big sale for glass eyes to a doll manufacturer.

The Mysterious Retort (1906)
Famed film-maker George Méliès tells the story of an alchemist and a magical glass retort.

So’s Your Old Man (1926)
Poor glassmaker Sam Bisbee has invented break-proof glass and plans to premier it to a convention of automobile vendors. Unfortunately for Sam, his car with the break-proof glass is switched with another one, and his demonstration brick toss really bombs.

Looking for something different? Documentaries, dramas or television shows? Just ask us! There is a lot more to see at the Rakow Research Library.