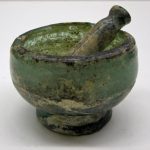 If you think about how glass relates to medicine, you might first conjure images of fingers cut on a broken bottle. But glass has a long history as a curer of wounds and an enabler of healing, not just hurting: from jars for ointments and medicines, the mortar and pestle for preparing prescriptions, glass eyes, test tubes and syringes for blood analysis, and even ultra-sharp surgical blades made from obsidian.

But a novel way for doctors to use glass inside the body dates to the late 1960s, when a scientist named Dr. Larry Hench turned what seemed to be a problem—a glass that dissolved in water—into an answer: glass that could be put into the body to promote healing, even as it dissolved away in the body’s fluids.

You may know that soda-lime glass is the most common family of glass. It is made by melting together silicon dioxide (also called “silica”or “quartz”) from sand, sodium from washing soda, and calcium from limestone. Within the soda-lime family, by changing the amount of these ingredients plus many others, manufacturers can make glass that works for everything from beer bottles to stained glass windows. It’s like how a baker can start with flour,sugar, and water, to make anything from a pancake to a birthday cake!

But many other families of glasses can be created that still contain silicon dioxide, but into to which is added other kinds of atoms as the basic ingredients. Those other atoms, like spices in a kitchen cupboard, give decidedly different “flavors” or behaviors to the glass that forms when solid.

The glasses that Dr. Hench discovered contain phosphorus, or “phosphates” (the chemical name for the combination of phosphorus with oxygen). When phosphates are added to silica, a glass can be made that combines with water easily, even water vapor from the air, and can turn into a puddle on the counter!

These kinds of glasses, now called Hench bioglasses, in Dr. Hench’s honor, when surrounded by body fluids turn into the minerals that body tissues like skin and bones need to heal. Materials scientists and engineers now work with doctors to make Hench glasses into shapes like missing or broken bones, or into stuff like fiberglass insulation that can be packed inside a poorly healing wound. Once in the body, the implanted Hench glass “bone” acts like a scaffold to direct bone regeneration. The implanted wool does a similar thing to help difficult skin wounds to heal.

Another kind of bioglass is used by dentists for crowns and false teeth. These kinds of bioglasses are called “glass-ceramics.” First invented by Corning in the 1950s by Dr. Donald Stookey, glass-ceramics have taken many forms, from casserole dishes to missile nosecones to space telescope mirrors. The dental bioglass-ceramics are extraordinarily tough, so they can withstand decades of chewing and saliva: the opposite of Hench glasses!

In 2018, sculptor Karen LaMonte was the CMoG/Corning Inc. Specialty Glass Resident. This is a residency that enables an artist access to the Corning Incorporated research facility (where glass-ceramics were invented), to explore use of these highly engineered biomaterials in new artwork, and to work side-by-side with Corning researchers. They share ideas and challenges around using glass typically only used for technical applications for making new artwork. Karen explored how to use both the tooth glass-ceramics and Hench glasses in her sculptures, which she makes by casting molten glass into molds. Currently, her work is exploring the shapes of clouds, and the female body. She was inspired to use bioglasses and bioglass-ceramics—both the sturdy durable tooth kind, and the dissolving healing kind—to make the water-rich clouds that might themselves dissolve, and the human forms out of a glass that would heal bodies.

Stay tuned, because in February 2019 Karen returns to the Museum to talk about her experiences in a public Behind-the-Glass lecture.