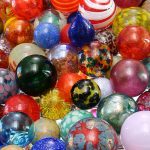 The stoic bank examiner, Mr. Carter from the classic movie It’s a Wonderful Life, made it clear to George Bailey that he wanted to spend Christmas with family in Elmira, New York. That’s just down the road from The Corning Museum of Glass. Do your holiday plans include visiting folks in the area? If so, we’d love to help you fan the flames of fun. This holiday season we’re offering a special Celebrations! tour daily at 11 am and 1 pm. Each object on the tour celebrates something special in a unique and glassy way!

Virtue of Blue
Uninspired by rectangular solar panels but entranced by their inherent sparkle and shine, designer Jeroen Verhoeven celebrated the panels’ hidden beauty. His design turns the rectangular grid shapes into a cloud of delicate, deep blue butterflies gathered around a central bulb.

Rhyton (drinking horn)
Step back 2,000 years to party like an ancient Roman. This vessel with the shape of snail’s head at one end was used for drinking wine. Liquid was drunk from the snail’s snout. A finger was placed over the hole when it wasn’t in use.

Beaded Wedding Basket
Glass beadwork was used in the past to help celebrate weddings in parts of Indonesia. Baskets, such as the one shown here, were filled with gifts, often of food or cloth, and were presented to a newly-married couple.

Cup with Gladiators
The holidays find many people in sports stadiums cheering and drinking from cups that feature the names of their favorite teams. Gladiators in the first century had their fans, too! This glass cup features the exploits of actual gladiators along with their names.

Punch Bowl
The owner of this 12-gallon punch bowl, the largest known in the United States, was ready to party in a big way. Made for Tiffany and Co. in 1904, it and the 44 cups made for it provide a peek into the kind of over-the-top celebrations industrial tycoons were known to throw in the early 20th century.

We’ve found that people all over the world know how to have a good time with glass. We hope you’ll visit The Corning Museum of Glass and add your holiday celebration to the mix!