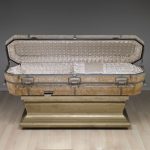 The Industrial Revolution in America altered nearly every part of life, including death. Until the late 1800s, burial in a hand-worked wooden coffin was common. Unfortunately, the coffin and the body inside were known to quickly succumb to the teeming array of life below ground. Their wood construction didn’t do much to discourage graverobbers either, but grieving loved ones had few other options.

Glass first appeared on U.S. coffins when small clear panels were added to the lids of caskets for viewing the deceased. The window also would alert onlookers that the occupant had been accidentally buried alive if breath condensation appeared on the inside of the glass.

Eventually inventors experimented with making entire coffins of industrial glass and produced plenty of controversy in the process. Around 1920, glass coffin corporations sprang up across the country. Most aimed to sell a design patented by James W. DeCamp of Blackwell, Oklahoma that “… will for all time resist the action of every destroying element to which burial caskets are exposed.” (The Corning Museum of Glass coffin is based on DeCamp’s design.)

Salesmen created a speculator’s frenzy selling stock in glass caskets before any glassworkers had mastered making them.

The challenge seemed to be in cooling down the adult-sized mold-cast coffins at a speed that allowed the glass to become stable and resistant to cracking.

With no actual adult-sized glass coffin to sell, The Modern Glass Company of Toledo, Ohio, placed a smaller sample casket in a salesroom window downtown. Lines of investors soon formed outside the building to purchase stock. Though the sales plan was wildly successful, the company eventually went bankrupt and was accused of fraud having not produced a single adult-sized casket. Four thousand investors were left holding the bag. (See article from The Continent, March 16, 1922.)

In 1922, The Crystal Glass Casket Company of Washington, D.C., ran into trouble when Washington newspapers, suspicious of the company’s unfulfilled promise to produce even one adult-sized glass casket refused to run advertisements for them until they did. An adult-sized glass casket finally was placed in the showroom, ironically, under a glass case. Even from the forced distance, observers noticed cracks in the corners of the casket that had been filled with transparent adhesive. Still unsatisfied, newspapers refused to run the ads. The Crystal Glass Casket Company shuttered its doors soon after. (See article from United States Investor, Vol. 32, Issue 2.) 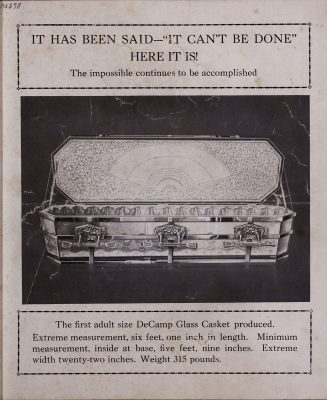 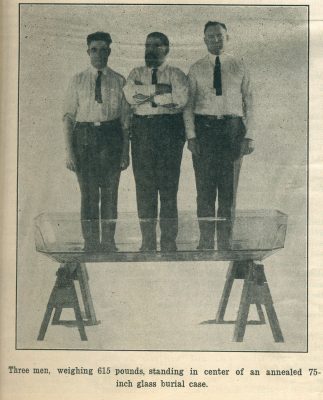 Glass casket companies fizzled along with the financial dreams of their investors, but nothing dampened the desire to cast a full-sized coffin in glass. In fact, a 1924 article in a trade journal called The Glass Worker discusses a set of 17 glass coffins successfully completed from a run of 20 at The Glass Casket Corporation in Altoona, Pennsylvania. Based on the report, reproduceable adult-sized glass coffins appeared to have finally become a reality.

For some reason, despite their feasibility, the day of the casket cast in glass had already come and gone. Today, adult-sized glass caskets are extremely rare. There are only two known examples, above ground, that is. One is in the collection of the Corning Museum of Glass, 2001.4.234, and the other is in Houston, Texas, at the National Museum of Funeral History. A glass casket catalog is on view as part of the The Corning Museum of Glass exhibition Curious and Curiouser: Surprising Finds from the Rakow Library.