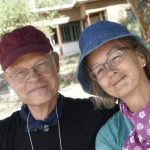 Support for The Corning Museum of Glass originates from all corners of the globe. Originally from the Netherlands, Daniel and Welmoet van Kammen have been avid glass enthusiasts and admirers of the Museum for more than 20 years, becoming Ennion Society members in 2013. They now reside in Princeton, New Jersey.

Both Dan and Welmoet studied at the University of Utrecht, one of Holland’s oldest universities, before deciding to further their studies in the United States—Dan in psychiatry and Welmoet in art history. Even then, both were passionate collectors. What started as a fascination with historic maps, particularly of the Netherlands and other places they had visited, grew into a collection of prints of early 20th-century American wood engravings. Wood eventually led to glass when the van Kammens purchased an old Victorian house in Pittsburgh full of stained glass windows.

Their appreciation for glass developed when they became members of the Pittsburgh Historical Glass Club, meeting like-minded people, collectors, and glass historians. There the van Kammens became enamored with early American free- and mold-blown glass—a love affair that lingers to this day.

During their time in Pittsburgh, the van Kammens often returned home to the Netherlands and to an antique glass dealer in Amsterdam where their collection of Dutch and English 18th-century drinking glasses began to take shape. It was from this dealer that they first learned of The Corning Museum of Glass. “Looking on a map we realized that Corning was not so far from Pittsburgh,” Welmoet said. “So in 1996, we visited the Museum for the first time and fell in love with the place.”

The van Kammens continue to visit the Museum every year. “It is still a learning experience,” Welmoet said. “The opening of the Contemporary Art + Design Wing has kindled a new interest in modern glass objects.”

Now retired, the van Kammens have taken their appreciation for glass to the next level. “We decided to finally learn how a wine glass is constructed,” Welmoet said. “We joined a beginner’s class at The Studio. It was the hardest class we’ve ever taken, but trying to manipulate molten glass while a snowstorm is raging outside is an unforgettable, satisfactory experience!”

“The van Kammen’s appreciation of the Museum has resulted in a generous contribution made in memory of their daughter,” said Karol Wight, president and executive director of the Museum.

“In addition to establishing an endowment—the Marleen van Kammen Resource Fund—to support the Museum’s strategic priorities, the couple have made a multi-year commitment to help underwrite our new David Whitehouse research residencies for artists and scholars and to support a future exhibition, New Glass 2019. Such generosity on the part of our donors enables the Museum to remain steadfast in its commitment to conduct world-class exhibitions, research, programming, and collections acquisition and stewardship while fostering creativity and innovation.”