There are many unforgettable sights in the world. Looking up at glaciers in Alaska and the icy fjords of the Inside Passage, while the bow of your cruise ship gently ripples the calm, crystal-blue water all around you, is certainly one of them. The seaward approach to the fortified old-town of Dubrovnik on the sun-scorched Dalmatian coastline of Croatia is another. But watching molten glass take on a strange new form while the silhouette of New Zealand’s Southern Alps mountain range grows on the horizon, might be, hands down, the best sight of all.

Many of the gaffers at The Corning Museum of Glass have had the opportunity to experience these places and marvel at the beauty and diversity this planet has to offer, as they venture out from port with the Museum’s Blow Glass at Sea program with Celebrity Cruises.

For the past 10 years, the Museum has successfully partnered with the Celebrity Solstice, Celebrity Equinox, and Celebrity Eclipse to bring hot glass demonstrations and the wonder of glass innovation to people and places the world over.

As that endeavor ends and new, exciting ventures take its place, Museum staff that helped build and shape the program over the course of a decade remember the moments that will remain with them for years to come.

For Chris Rochelle, hot glass projects team leader, working at sea was an unbelievable experience. “Never in a million years could I have seen this coming,” he says. Now, with 10 deployments and 50 countries under his belt, he still remembers the inaugural voyage of the Celebrity Equinox and docking in the Norwegian town of Geiranger, a small port at the head of a long, narrow fjord, surrounded by mountains. “A mystically beautiful landscape adorned with small houses and winding roads, walking paths that curved in and out of the never-ending scenery. One of the most beautiful places I’ve ever seen, straight out of a fairytale!” Rochelle recalls. 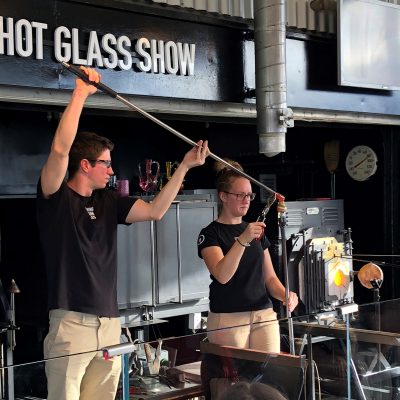 Logan Brooks assists Kim Savoie during a demon on a recent cruise on the Celebrity Solstice. 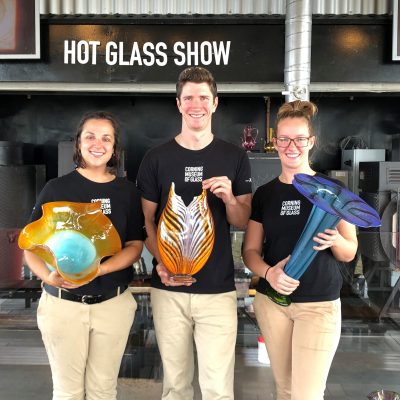 Stephanie Perry, Logan Brooks, and Kim Savoie show off their work from a recent cruise on the Celebrity Solstice.

Watching glass be made is often mesmerizing. Mastery of the material and the environment is key for any glass artist, which proved especially true aboard the ships. Glassblower Heather Spiewak remembers adapting to the unique conditions at sea. “At first it was a huge challenge, which ended up being a lot of fun,” she says. “From the rocking of the ship, the natural light, rain, wind, fog, even snow! I have blown glass in all types of conditions and it has taught me more about the material than I could imagine.” Aaron and Sanja met on a Celebrity Cruise ship.

And glassblower Aaron Jack quickly learned that life on the ships involved a lot more than he’d expected. “On my first day my team lead told me that I was a muster station leader,” Jack says. “It was my job to stand before guests and explain the proper procedure in case we had to abandon ship. I was nervous, but everything went smoothly, and the ship stayed afloat! I learned a lot and took pride in being an integral part of the workings of the ship.”

But for Jack, the biggest surprise was yet to come. “My most cherished memory is meeting Sanja in New Zealand,” he says. “She was a crew member and very quickly became my travel partner. In the end, she became my best friend, love of my life, and my darling wife.”

Of course, not everyone involved with the Blow Glass at Sea program could go out with the ships. A project of this scale involves a lot of planning and supervision that happens behind the scenes. Ellen Corradini, director of human resources and safety, helped steer proceedings from on solid ground. “Being at sea on a beautiful ship, experiencing other parts of the world and getting paid for what you love to do sounds like a dream job – and in many ways it is,” she says, “but living on a ship for three months at a time in a windowless cabin is no easy task.”

Through an intense orientation process, glassblowers were introduced to the Museum’s collections, exhibitions, and educational programming, as well as the skills required to successfully narrate a hot glass demonstration. “Many glassblowers are never required to speak to an audience about glassblowing, especially ‘in the moment,’” Ellen revealed. “This requires the ability to connect with audiences and deliver an informative and interesting explanation of what is occurring on stage.”

With this litany of skills at their disposal, our fleet of glassblowers confidently set sail time and time again.

For everyone involved with the program over the years, the lasting memories are of the seas they’ve sailed, the glass they’ve made, the crews they’ve worked alongside, and the challenges they’ve faced and overcome are precious. But the enormity of the task was never too daunting. “To this day I’m awestruck that I am a glassblower,” Spiewak concludes, “let alone that I have traveled the world doing what I love.”