This blog post comes from Karol Wight, president and executive director at The Corning Museum of Glass. 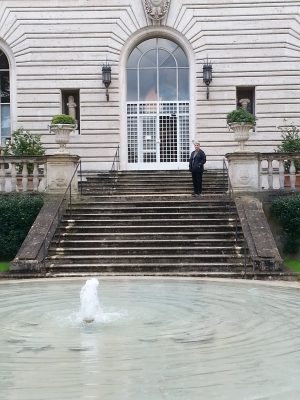 Standing on the entrance steps of the
American Academy in Rome, our ‘home
away from home’ for the month of February.
Photo credit: Steven Wight.

In 2015, the Kress Foundation and the Association of Art Museum Directors, in collaboration with the American Academy in Rome, began to offer an Affiliated Fellowship at the American Academy for a museum director (and member of AAMD) to spend one month in Rome pursuing a research topic. The fellowship was meant to enable a director to step away from their day-to-day duties and take a deep dive into scholarship. I was fortunate to be the second recipient of this Affiliated Fellowship, and spent this past February in Rome, undertaking my research project.

My project focused on the topic of ancient Roman cameo glass and how it was manufactured. There is ongoing debate in the world of ancient glass studies as to how the blanks for cameo carved objects were manufactured in antiquity. And while various modern experiments to recreate these types of pieces have been undertaken by a number of artists and scholars, there is no real consensus as to which techniques were more likely to have been used in antiquity. My current theory is that more than one technique may have been used, depending upon the object being manufactured (a flat object, an open vessel, or a closed vessel). 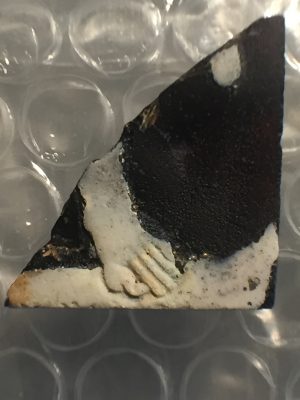 Fragment of a Roman cameo vessel,
preserving the foot of a figure. From the
Evan Gorga Collection, now in the Palazzo
Altemps, Rome. The bubble wrap
background provides a sense of scale for
this fragment. Photo credit: Karol Wight.

One of my primary aims in studying ancient Roman cameo glass during this fellowship is to create a visual database of existing works that are not well published or photographed in detail. By creating a visual database, one can turn to surviving evidence preserved in or on the glass to try and answer the many questions raised by the various modern glassmaking attempts.

Being able to conduct this research in Italy gave me the opportunity to spend time examining Roman cameo glass collections in Rome (the Evan Gorga Collection at the Palazzo Altemps), in Naples and Pompeii (at the National Archaeological Museum and at the Antiquarium), in Florence (at the National Archaeological Museum), and at the Vatican Museums. I was also able to visit numerous other museums in Rome to see additional works of cameo glass on public view. As I visited various museum collections, I used macro-photography to record evidence of manufacturing, both in the matrix of the glass itself (such as bubbles), and in the form of tool marks on the surface of the glass. And finally, I spent time using the Academy’s amazing library to consult various historical volumes on ancient glass collections, as well as current museum catalogues. 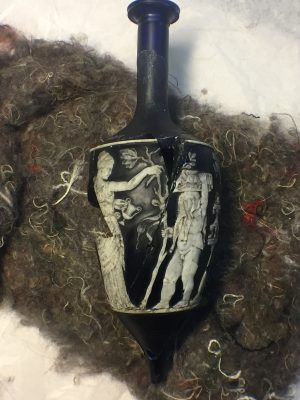 Roman cameo glass bottle found at Torrita di Siena, Tuscany, Italy. Now in the collection of the National Archaeological Museum, Florence, Italy. Because the bottle is fragmentary, it was possible to examine the interior surface of the vessel to look for signs of manufacture not visible on the exterior. Photo credit: Karol Wight. 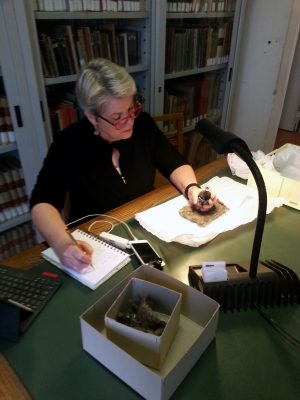 Examining the Torrita di Siena bottle in the library of the National Archaeological Museum, Florence, Italy. Instead of a digital camera, I used my iPhone 6 with a clip-on macro lens to take detailed photographs of this bottle, as well as all of the other cameo pieces photographed during my period of study. Photo credit: Steven Wight.

By the time my fellowship ended, I had taken 1,040 images of cameo glass. I began to create a database that includes my photographs, as well as my written observations about the works. This database is something that will remain a work in progress as I find time to add my comments and images, and will grow as I am able to take additional study trips to add cameo glass works beyond Italy, including those in the collection of CMoG. 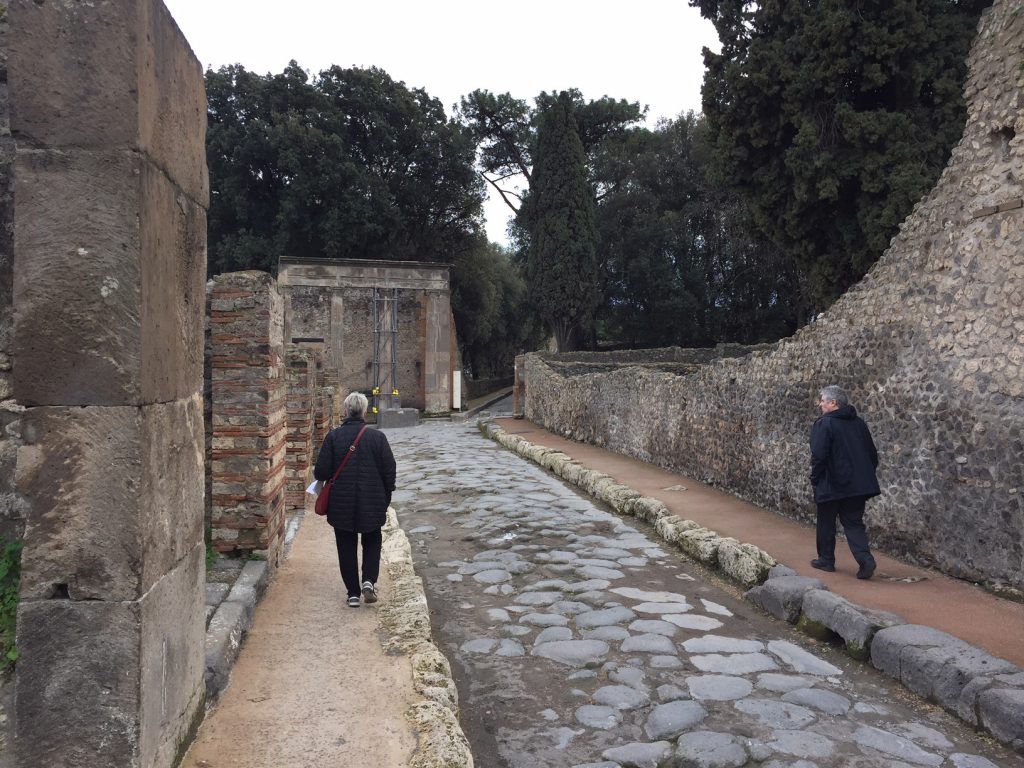 Exploring the remains of the ancient city of Pompeii, buried by the eruption of Mt. Vesuvius in A.D. 79. Two ancient Roman cameo glass plaques were excavated from the House of M. Fabius Rufus in Pompeii and are currently on view in Antiquarium there. The requirement to see these works in the Antiquarium resulted in a wonderful visit to this ancient city. Photo credit: William Gudenrath.

I am thankful to the Academy, the Kress Foundation and AAMD for making such an opportunity possible.