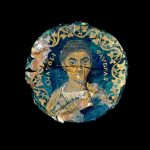 As you channel surf over a long, rainy weekend, chances are you will stumble upon a TV show that claims to reveal “secrets of the Egyptians” or “mysteries of the Romans.” Although the claims of these shows range from provocative to outrageous – forgotten technologies! time travelers! aliens! – they lure us in because there is so much we still don’t know about the ancient world. No one quite knows what this curious glass object is or what it was for. It looks a bit like a goblet, with a wide bowl, stem, and flared foot, but – at almost 4 pounds – it is too heavy and bulky to drink from. It could have held perfume, but the shape isn’t quite right. Some scholars think it looks like a dinos (pronounced DEE-nos), used by ancient Greek people to mix water and wine before serving, but those mixing containers were much bigger. And what were the drilled holes through the handles for? Attaching a lid? Hanging? 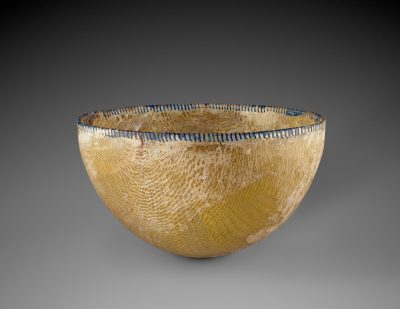 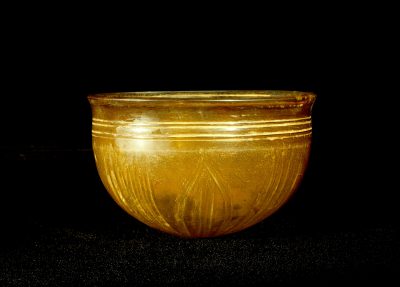 I have studied these bowls for years, and they still bewilder me. They have rounded bases, so cannot stay upright on their own, but we think they were used for drinking. So how were they held when full of liquid? Were they set upside down, or hung? In the Origins of Glassmaking gallery, we display these bowls on little plastic rings that hold them upright, but very few similar stands or rings survive from antiquity. Last fall, I had a Eureka moment while reading about an exhibition at the British Museum. In the frigid Asian steppes where the Scythians lived, organic materials can survive for a long time. Surviving organic materials from the steppes include rings made from cloth and basketry that look just like the little plastic rings we use in our galleries. Maybe glass bowls were held upright with such materials, that have since decomposed in the hot, dry Mediterranean climate?

Is the figure a man or woman? 19th-century descriptions of the figure on this gold-glass portrait identify it as the image of a man, but subsequent study of the hairstyle and clothing suggested it might be a woman. The inscription around the head wishes joy to Anatolius, a male name. The grammar indicates the name doesn’t refer to the figure in the image, but rather the person viewing it. Under a microscope in the Conservation lab, we discovered that this figure has a short beard. So perhaps this individual is intentionally androgynous, subverting our expectations of gender identity and expression. Turns out, this is actually a pretty common subject in Roman art, but we don’t see it as often in glass.

Is it ancient or modern? Trick glasses are beloved pieces in our European gallery, but the Romans also made trick glasses. However, we aren’t sure if this example was made by 4th-century Romans or 19th-century European glassmakers copying Roman objects. David Whitehouse originally thought it was 19th century because the ribbed decoration, added with a dip mold, was very unusual, and the surface of the glass doesn’t look weathered. But more recent research has uncovered similar pieces which were made in ancient Syria, so perhaps it is ancient after all.

How was it made? This unusual glass fragment is dichroic (from the Greek meaning “two colors”). It appears olive green in reflected light but looks translucent violet when light shines behind it. For decades, scholars didn’t know how this effect was achieved. Only recently has scientific testing been sensitive enough to detect the teeny-tiny particles of gold and silver suspended in the glass that provide this coloration. Our fragment was intended to look something like the Lycurgus Cup in the British Museum, but it probably broke during manufacture and was never finished.