The Corning Museum of Glass (CMoG) today launches GlassBarge through May 28 at One°15 Brooklyn Marina in Brooklyn Bridge Park, kicking off a four-month tour celebrating the 150th anniversary of the canal journey to bring glassmaking to Corning. GlassBarge is offering free public glassblowing demonstrations aboard a 30’ x 80’ canal barge specially equipped with the Museum’s patented all-electric glassmaking equipment. Following its debut in New York City, GlassBarge will then travel north on the Hudson River, and westward along the Erie Canal, stopping in Yonkers, Kingston, the Albany, Syracuse, and Rochester areas, and Buffalo, among other cities.

A flotilla of historic ships will accompany GlassBarge throughout the summer, including the Lois McClure, a replica of an 1862 canal barge, and the C.L. Churchill, a 1964 tugboat, both part of the permanent collection of the Lake Champlain Maritime Museum. Educators from the Maritime Museum will also share the story of canal life in the 19th century and how materials were shipped on New York’s waterways. Throughout its voyage, GlassBarge is under the flag of the South Street Seaport Museum and will be accompanied by the Museum’s historic tug W.O. Decker on the Erie Canal. GlassBarge commemorates the 150th anniversary of the relocation of the Brooklyn Flint Glass Company—now known as Corning Incorporated—via the New York Waterways by canal barge to Corning, which would become a center for important artistic and technological innovations in glass. In addition to sharing the story of glassmaking in Corning, the recreation of the 1868 barge voyage emphasizes the continued role of New York’s waterways in shaping the state’s industry, culture, and community. GlassBarge is the 2018 signature event for the statewide celebration of the Erie Canal Bicentennial (2017-2025).

“We are thrilled to officially launch GlassBarge, a unique project that embodies the Museum’s dedication to educational programing outreach and celebrates the history of glass with new audiences throughout the state,” said Karol Wight, President and Executive Director of The Corning Museum of Glass. “We are very grateful to our many supporters, especially Governor Andrew Cuomo’s Regional Economic Development Council, without which the project would not have been possible.”

“The 1868 journey on New York’s waterways set in motion 150 years of innovation in Corning that has shaped the modern world. We’re so excited to tell that story beginning in Brooklyn Bridge Park, mere blocks from where it began—and on a canal barge, no less!” said Rob Cassetti, Senior Director of Creative Strategy and Audience Engagement for The Corning Museum of Glass. “While our team of gaffers (glassmakers) always welcomes the opportunity to share the art of glass with new audiences, we’re particularly eager to fire up the furnaces to 2100° on the East River today and kick off a summer of glassblowing on the waterways of New York!” said Steve Gibbs, Senior Manager of Hot Glass Business and Technology Development. “GlassBarge will officially open with the cutting of a hot-glass ribbon stretched across the barge, after which visitors will have the opportunity to see our glassmakers demonstrate how to shape glowing globs of molten glass into vases, bowls, and sculptures.”

GlassBarge will visit ports in Yonkers, Poughkeepsie, Kingston, Waterford, Little Falls, Sylvan Beach, Baldwinsville, Fairport, Lockport, Buffalo, Medina, Brockport, Pittsford, Seneca Falls, and Watkins Glen, among others. A ceremonial last leg of the trip by land concludes in Corning with a community-wide celebration on September 22. In total, GlassBarge will travel to nearly 30 cities and towns, offering glassblowing demonstrations at each port. A full summer schedule is available at www.cmog.org/GlassBarge. 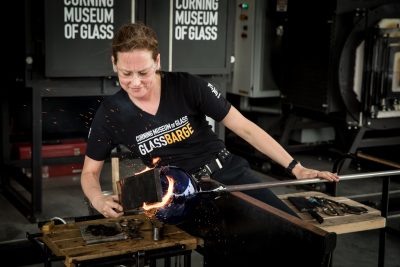 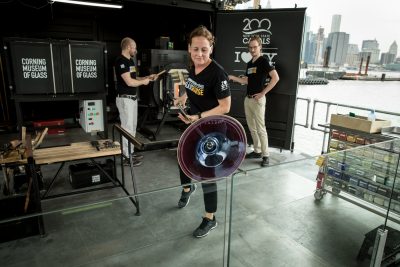 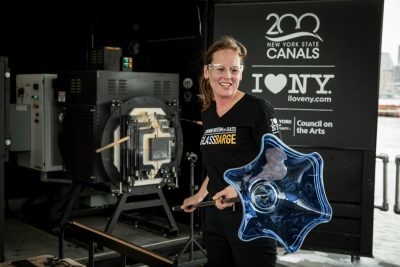 The GlassBarge journey is also being celebrated in Corning with a reinstallation of the Crystal City Gallery, which also commemorates the 150th anniversary of glassmaking in Corning. The narratives explored in the Crystal City Gallery tell how the city became one of the premier centers for glass cutting in the United States, a trend in American luxury glass that developed as the Corning Glass Works was becoming established in its new home.

TICKETING INFORMATION
GlassBarge will offer glassblowing demonstrations daily from 11 a.m. to 6 p.m., every hour on the hour. Due to limited seating aboard GlassBarge, reservations are strongly encouraged, and can be made at www.cmog.org/glassbarge.

Registration for the demonstrations at other ports will go live four weeks prior to each stop.

The Lake Champlain Maritime Museum will invite people aboard the Lois McClure at each port to learn about what life was like on board a canal barge in the 19th century. Tours are first come, first serve and do not require registration. The South Street Seaport Museum will also be on hand to share information about their role in the GlassBarge project, and the historic tug from their collection that will join GlassBarge on its journey through the Erie Canal. GLASSBARGE WEEKEND SCHEDULE
A full schedule for GlassBarge’s summer tour, along with ticketing information, can be found at www.cmog.org/GlassBarge. Weekend stops include:

PASTPORT APP
PastPort is a web app that serves as a guide to the GlassBarge 2018 tour and as an introduction to the beginnings of glassmaking in Corning. An interactive map provides details on GlassBarge port stops, community and regional historic ties with the Erie Canal and Hudson River, and historical information on glassmaking’s journey to Corning. Points of interest and photos illustrate the vibrancy of each community where GlassBarge stops along New York State’s waterways. Visit: https://pastport.cmog.org New York State Executive Director of Tourism Ross D. Levi said, “Corning is synonymous with the history and art of glassmaking and The Corning Museum of Glass welcomes hundreds of thousands of visitors annually. The GlassBarge journey across New York State will engage new audiences and encourage greater visitation by bringing this incredible experience to communities along the Hudson River and Erie Canal.”

“NYSCA is proud to support GlassBarge, which through public waterfront events builds community through the arts,” said NYSCA Executive Director Mara Manus. “The Corning Museum of Glass is a beacon for cultural tourism in the Southern Tier, and we applaud their vision and initiative in expanding their reach in celebration of the Erie Canal Bicentennial.”