When approaching Jeroen Verhoeven’s Virtue of Blue, you might first see a cloud of winged insects crowding around a central light. To me, it brings to mind those long, lazy summer evenings when moths and other flying creatures noisily and frantically cluster around dusty frosted globes and dirt-encrusted naked bulbs. At the Corning Museum of Glass, the insects are quieter, the mood calmer, the glass cleaner.

Here, each specimen is a butterfly, or rather, a butterfly-shaped solar cell, mounted in place not to an insect collector’s Styrofoam board but to an artist’s carefully-designed metal frame. Suspended from the ceiling, the central light slowly oscillates in the gently circulating air; the 502 iridescent, sapphire-blue butterflies move en masse, obscuring much of the light and casting shadows on the floor below. 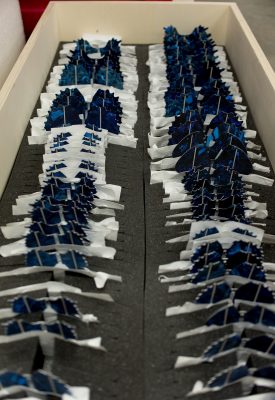 Virtue of Blue butterflies prior to assembly. 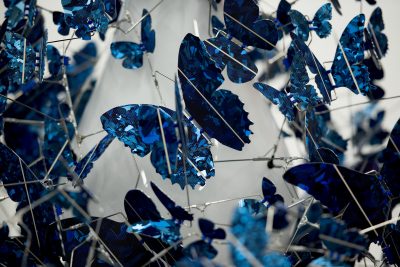 Detail of Virtue of Blue.

Just as a butterfly spreads its wings to gather the sunlight needed to prepare its muscles for flight, each one of Verhoeven’s creations is energized by its vital light source, enclosed within a hand-blown glass bulb. The illuminated cells produce a part of the electricity that powers the light, which once again revitalizes the cells, and so on, demonstrating the notion of renewable energy and sustainability.

The four species of butterflies have been laser-cut from the same kind of silicon photovoltaic cell found on road signs or rooftops. The chemical element silicon (Si) is the most abundant atom in Earth’s crust. In nature, it is always found in combination, either with just oxygen (to make quartz or “silica”, the main ingredient of most glasses) or mixed with other elements (to make most every kind of rock). When specially purified by scientific or industrial processes, silicon becomes reactive to light, transforming the energy of every incoming photon into a bit of electricity. The more light that silicon absorbs, the more electricity it produces. By itself, the purified silicon is a dull silvery-grey.  A thin coating of silicon nitride, an unusual clear glass, increases the amount of light that gets trapped in the silicon. The coating sets up an optical interference effect that makes each solar cell look blue, just as a thin sheen of clear oil on a water puddle can create a rainbow of colors. The wings of biological blue butterflies create their color in a similar way, as white light interacts with the thin layers of fingernail-like material that makes up the wing. In living butterflies, blue has the virtue of attracting a mate; in Verhoeven’s butterflies, the virtue of blue consists in part of its ability to increase electrical production; in both cases, the vibrant blue captures our attention and imagination.

The silicon nitride glass responsible for Virtue of Blue is, for the Corning Museum of Glass at the moment, a unique example of a glass that is NOT made from silica as a key ingredient. As artists explore the new kinds of glass being produced for innovations in technology, medicine, and other purposes, and come to recognize the unique qualities of these materials, the varieties of glass in the museum’s collection will grow. This might be the greatest impact and virtue of Verhoeven’s butterflies.

Special thanks to Jane Cook, chief scientist at The Corning Museum of Glass, for her help with this post.