Katharine Lamb Tait at work on a window.
The cartoon is displayed on the wall
behind her and there are two matted
window designs to help guide her work.
CMGL 115294

Since beginning my internship at the Rakow Research Library, I’ve been pleasantly surprised by their collections every day. One of the most interesting I’ve come across so far is Katharine Lamb Tait’s archive. In this collection of close to 30 boxes, there’s everything from Tait’s sketches for stained glass window designs to her diploma to her purse. It’s a unique insight into the life of an artist that people rarely get to see.

Katharine Lamb Tait was born into an artistic family in June 1895. The family owned and operated a stained glass studio, J&R Lamb Studios. The studio was founded in New York City in 1857 by Tait’s grandfather, Joseph Lamb, and great-uncle, Richard Lamb. Charles Rollinson Lamb, Katharine’s father, was an architect and designer, as well as the second president of J&R Lamb Studios. Her mother, Ella Condie Lamb, was an accomplished artist and stained glass designer. Tait commented that “being brought up in that atmosphere, I wanted to be an artist, of course, because my mother was a painter.” She would also realize that her father’s knowledge and designs had a strong influence on her as an artist, making him the “best teacher.” After graduating the Friends Seminary in New York City, Tait continued her education at the Arts Student League of New York. She also studied design at Columbia University, the National Academy of Design, Cooper Union, and abroad in France and England, and taught design for multiple years.

Tait’s first commercial work as an artist was in the advertising department of the Fleishman Company in New York. After a few years, Tait grew tired of drawing “children eating bread.” Katharine left the company and traveled to France, where she fell in love with the stained glass windows she saw. In 1921, Tait joined her family’s company as a designer for glass windows and mosaics. Her early work for the Studio reflected the influence of the Gothic architecture she saw in France, as well as the work of William Morris, Edward Burne-Jones, and the art nouveau movement. ‘Rose Window’, a color blot study for St. Peter’s, Charlotte, Va., one of the many designs in Katharine’s collection. CMGL 81305

In 1925, Katharine married businessman Trevor S. Tait. The couple had four children together: daughter Barrie and sons Robin, Colin, and Kevin. In order to spend more time with her family, she stopped working full-time. However, Tait never stopped making designs for J&R Lamb Studios. Her father and brother brought work to her at home, and during this time, she completed a number of sketches for window designs. In 1937, her children were old enough for school and Tait began to work on a more regular basis.

Tait’s life is full of many accomplishments. For more than 20 years, she was the head designer at J&R Lamb Studios. A moment that stands out in the company’s history is when Tait’s work won them a prestigious commission from Marine Corps Base Camp Lejeune. However, the studio felt the need to hide the fact that a woman designed their windows. Katharine’s brother Karl said, “You’re the only one that can do it, and I won’t tell them that you’re a girl or a woman.” She was proud that her sketches won them the commission, and even commented that the pieces had to “have two signatures on it by some high mucky-muck in the Marine Corps.” The mucky-muck, General R. H. Barrow, praised her work in multiple letters found in the Library’s collection, calling the work “beautiful,” “meaningful,” and an “inspiration for generations.” The work took her two years to complete, including the initial designs and the full-scale cartoons.

Tait’s windows are located all around the United States, from Holy Trinity Lutheran Church in New York City to 24 windows at The All Saints Episcopal Church in Birmingham, Alabama. In her lifetime, Katharine completed over 1,000 commissions. The insight I have gained into her life and career through her collection is a treat. 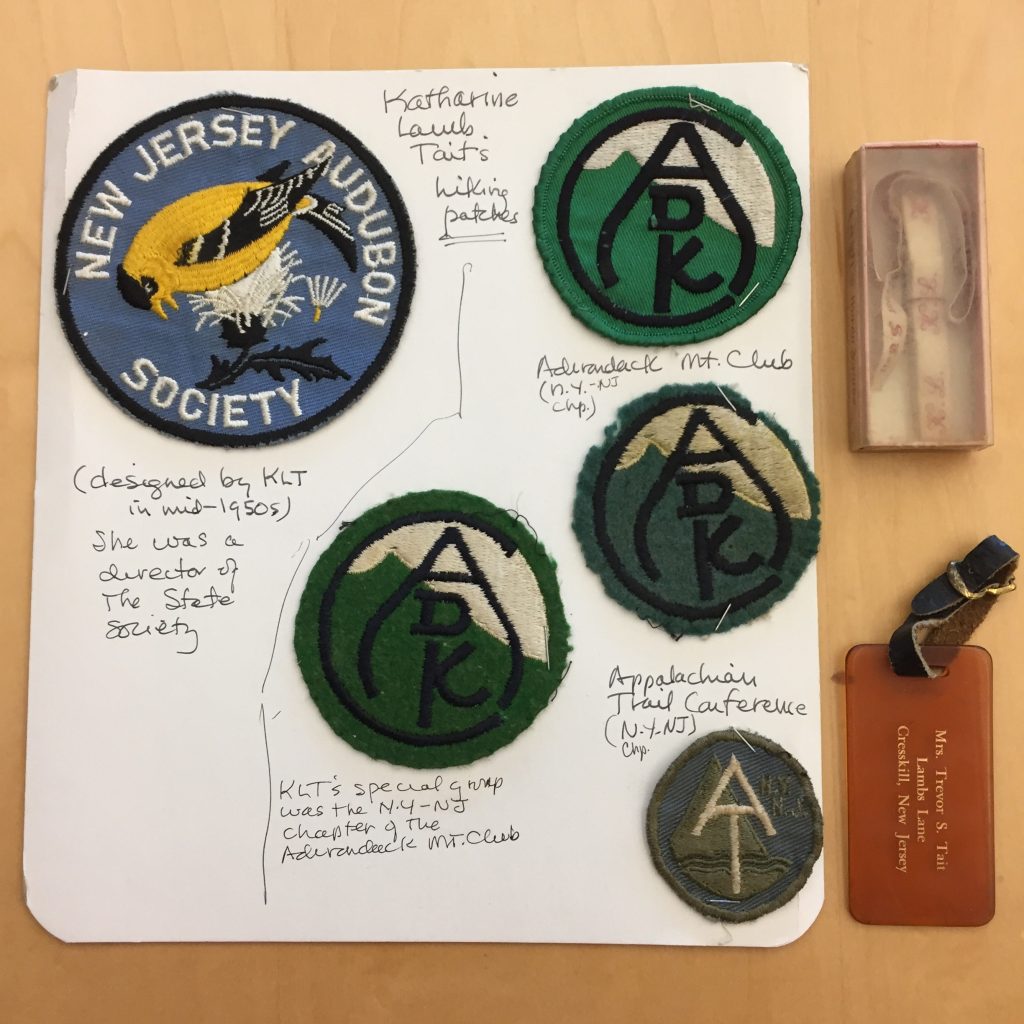 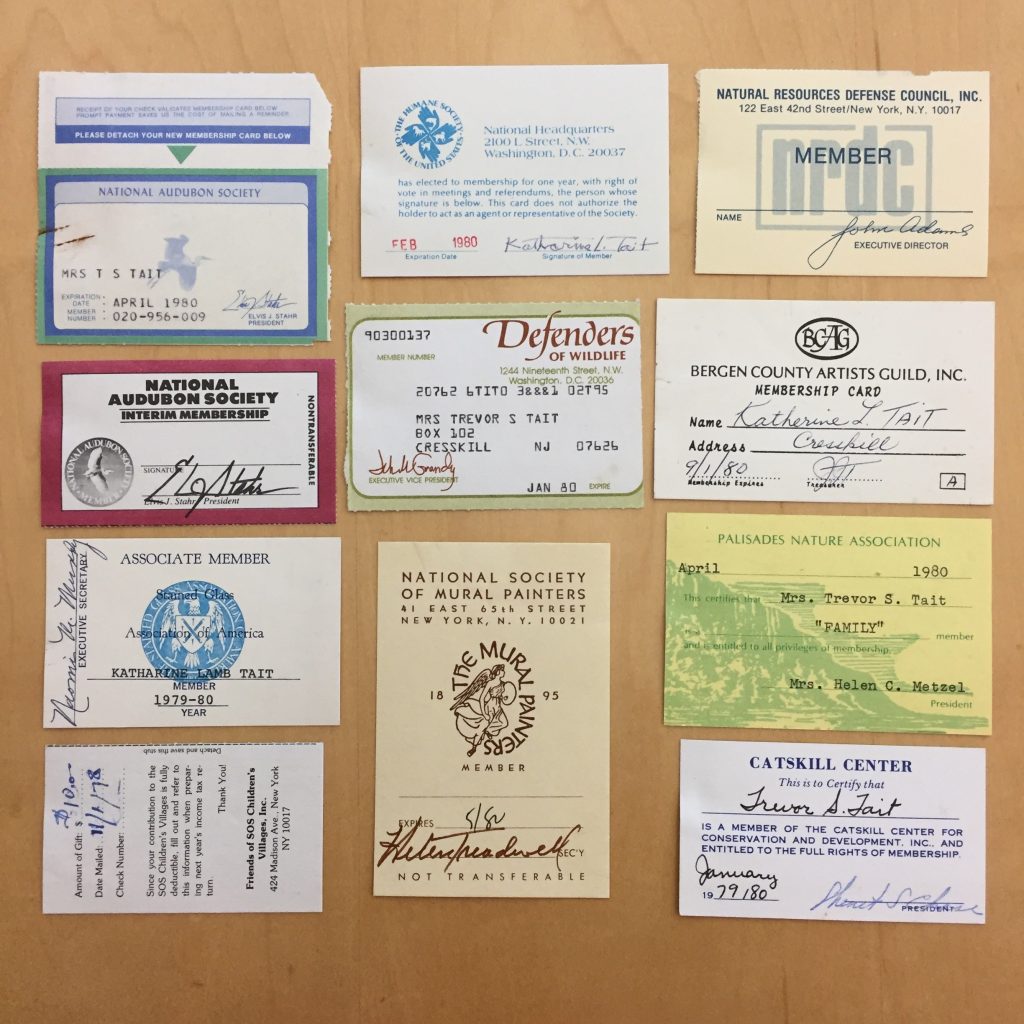 Tait’s membership cards for the Defenders of Wildlife, the National Society of Mural Painters, and the Stained Glass Association of America. CMGL 81305 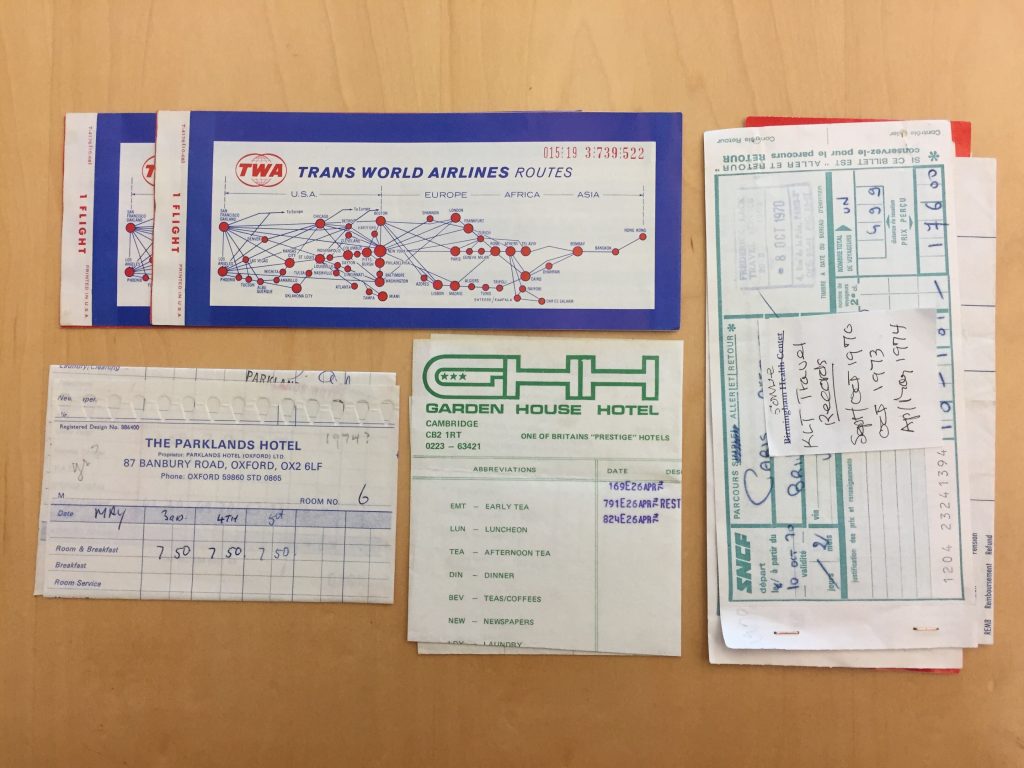 Some of Tait’s travel records and receipts. CMGL 81305

There’s so much to see in Tait’s collection. She wasn’t only a talented artist, but a nature enthusiast, a mother, and a collector of European peasant blouses. There’s a stack of membership cards in her files, most of them for art organizations or nature preservation groups. There are notes and diagrams for windows in her sketchbooks, books on art and nature, and plenty of designs drawings. It’s something special, to have these important pieces of someone’s life and to be able to piece them together into a story that’s about more than just art, but also the process and person behind it. Plus, it’s not every day you get to hold a sketch that became a full-sized stained glass window in your hands.

See work by Tait in the Museum’s collection.