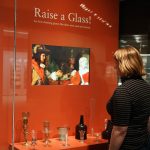 The Corning Museum of Glass has one of the finest and most extensive collections of historic European glass in the world. As curator of these objects, I’m constantly enthralled by the craftsmanship and technology they embody and the glimpses they give us of the lives and customs of the people who made and used them. However, when peering through a glass vitrine at rows of empty drinking vessels, it is sometimes difficult to imagine their stories beyond the Museum. Our new Raise a Glass! video installation now provides visitors with some of this missing context. Thankfully, glass drinking vessels of many types have been depicted in works of art since ancient times. From wall frescoes excavated in Pompeii, to illustrated medieval manuscripts and Dutch still life paintings, there is a remarkably consistent visual record of glass, showing the drinking customs of different societies throughout history.

We began by taking a focus on paintings from the 1600s and 1700s and found paintings that depicted glass drinking vessels in use, in collections as close by as the Arnot Museum in neighboring Elmira, and as far away as Buckingham Palace in London and the Uffizi Gallery in Florence. After obtaining permission to use high-resolution images of these works, our Digital Media team created a video montage which first presents the full image of a painting, and then zooms in on the glassware. On a shelf directly in front of the video monitor we’ve set out a selection of drinking vessels from the collection that are close matches to those in the changing images. These lively views into the past reveal the importance of communal drinking in social life, ceremonies and celebrations throughout history. We can see what sort of wine or beer was consumed from which types of glassware, how they were served and, often more intriguingly, how they were held. Intricately crafted glassware that might seem to have been made only for display turns out, in fact, to have been effortlessly handled by drinkers of its time. Take this wineglass with a twisted, pretzel-like stem, probably made in the Netherlands during the 1600s, as an example. In fact, being able to successfully hold and drink from challenging vessels like this was considered a mark of accomplishment.

Putting this display together has been enormous fun and we really hope visitors will enjoy making the connections for themselves, and consider how they use their own drinking vessels at home.