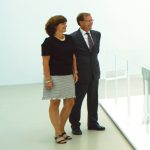 When he was young, Ennion Society member Mark Rogus collected sea glass as it washed ashore near his childhood home in Maine. For the first time, he saw glass through an artistic lens. He didn’t know it then, but Mark would later become heavily involved with The Corning Museum of Glass and eventually a collector of much more.

After graduating from Clemson University in South Carolina, Mark embarked on a career in finance that moved him around the U.S. and London before eventually settling in Corning with his wife, Kay. They were anticipating the arrival of their triplet daughters, Natalie, Emma and Charlotte, and the beautiful scenery of Upstate New York appealed to them as the perfect location to start a family. Corning Incorporated had been an early client of Mark’s, and he was familiar with the executive team and impressed by Corning’s remarkable history of innovation. It proved to be a perfect fit. He joined Corning Inc. in 1996 as manager of corporate finance and became senior vice president and treasurer in 2004. Mark is retiring from Corning this year after 21 years of service. In Corning, Mark’s appreciation for glass took root. He routinely visited Corning Inc.’s research labs and became interested in the technological applications of the material. After Mark and Kay were introduced to Amy Schwartz and Bill Gudenrath from The Studio, they joined the Ennion Society to become more engaged with the Museum and its activities. But it was the gift of a Steuben holiday ornament from Mark’s supervisors that was the genesis of their personal collection, which now boasts many of Gudenrath’s Venetian-style works, Josh Simpson’s planets, and pieces by Richard Satava.

Mark was soon involved with the Museum as an officer and later, treasurer. He is currently a member of the board of trustees and serves as chair of the finance and audit committee. He also sits on the acquisitions committee, helping to guide the institution on the selection of work for the collection. “The Museum has been a terrific opportunity to learn more about glass as an art form,” he said. “What better place than the world’s leading authority on the subject?”

Each of Mark and Kay’s daughters have begun their own careers with summer jobs at the Museum, keeping the family’s connection to glass strong. As Mark’s childhood sea glass collection gets consigned to memory, the collecting bug has been inherited by his daughter Charlotte, who has developed her own interest in scavenging for this material that has been sculpted by nature. “It must be in her DNA!” Mark joked.