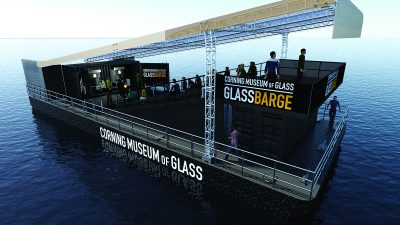 The Corning Museum of Glass (CMoG) today announced the receipt of $469,625 in grants through Empire State Development’s I LOVE NEW YORK program, the New York State Canal Corporation, and New York State Council on the Arts (NYSCA), under Governor Andrew Cuomo’s Regional Economic Development Council initiative. This generous funding will support the launch of GlassBarge in commemoration of the 150th anniversary of the canal journey to bring glassmaking to Corning, New York, and will further CMoG’s participation in the statewide celebration of the Erie Canal Bicentennial.

In 1868, the Brooklyn Flint Glass Company relocated to Corning, via the New York Waterways, and evolved into the company that is today known as Corning Incorporated. In celebration of this pivotal journey, CMoG will launch GlassBarge—a canal barge equipped with CMoG’s patented all-electric glassmaking equipment—in Brooklyn in May 2018. 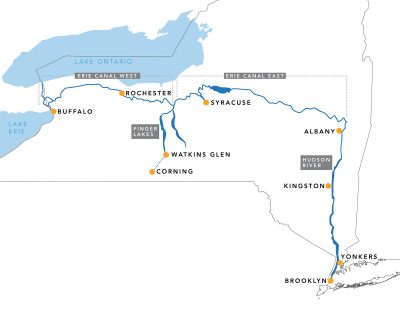 During a four-month journey, GlassBarge will travel north on the Hudson, then westward along the Erie Canal from Albany to Buffalo, emphasizing the continued role of New York’s waterways in shaping industry, culture, and community in New York State. Stops will include Yonkers, Kingston, Albany, Syracuse, Rochester, and Buffalo. In each port city, CMoG will provide free glassblowing demonstrations for the public from the deck of GlassBarge. The tour will conclude in the Finger Lakes, completing the journey by water in Watkins Glen. A ceremonial last leg of the trip by land will conclude in Corning with a community-wide celebration on September 22, 2018.

“The 1868 trip on the Hudson River and canal systems of New York State launched 150 years of glass innovation in Corning,” said Rob Cassetti, senior director, creative strategy & audience engagement at CMoG. “The glass inventions and technology developed in Corning have shaped the modern world, from the first electric light bulbs for Thomas Edison and the invention of optical fiber for telecommunications, to the glass used in modern flat screen displays. The success of the company led to the opening of The Corning Museum of Glass. We’re honoring this occasion by taking innovations developed by CMoG—namely, our patented electric hot shop and mobile hot glass programming—back to its roots: that notable journey along New York’s waterways.” 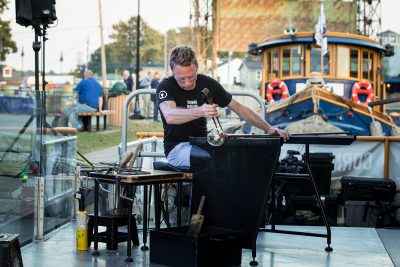 A glassblower makes glass aboard GlassBarge.

The tour coincides with the Erie Canal’s Bicentennial (2017-2025)—for which GlassBarge is a 2018 signature event—as well as the centennial of the commemoration of the Barge Canal in New York State.

Partners for the Journey 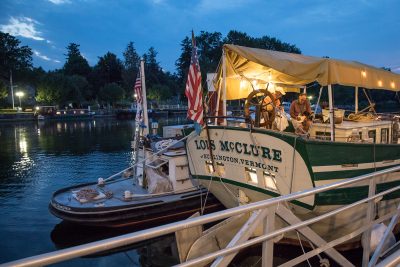 The Lois McClure from the Lake Champlain Maritime
Museum will accompany GlassBarge on its journey across
New York State.

GlassBarge will be moved along the waterways by the historic tug W.O. Decker—part of the fleet of the South Street Seaport Museum—which also received grant funds for restoration and activation in connection with GlassBarge programming. Also accompanying GlassBarge on the journey will be the Lois McClure, a replica of an 1862 canal barge, and the C.L. Churchill, a 1964 tugboat, both part of the permanent collection of the Lake Champlain Maritime Museum.

“By working with The Corning Museum of Glass, we will connect upstate and downstate by water,” said Capt. Jonathan Boulware, executive director of the South Street Seaport Museum. “Our New York-built 1930 tug—the last of her type—will escort the GlassBarge upstate, recreating a voyage made a million times over in the 19th century, and illuminating historical and modern connections. This voyage tells a historical story. But it will also connect people, ideas, institutions, and communities. The South Street Seaport Museum, represented by the small-but-mighty tug W.O. Decker, is thrilled to be a part of this exciting endeavor.”

“The Lois McClure will support CMoG’s programming by telling the story of 19th-century canal life and how materials were shipped on the Erie Canal, said Erick Tichonuk, co-executive director, Lake Champlain Maritime Museum. “Below decks, the boat will serve as a travelling exhibition gallery and provide a space for special events, receptions and programs. Above deck, we’ll be sharing how the 524-mile canal system is an engineering marvel that knitted together New England, New York, and the west, spreading commerce and ideas. Partnering with GlassBarge is a wonderful way to share the history of glass, the move, the canal system, and the human stories that go with them.”

Happenings in the Crystal City

CMoG will be offering related programming back home in Corning, as well. A re-installation of the Crystal City Gallery will share the story of how Corning became one of the premier centers for glass cutting in the United States, a trend in American luxury glass that developed as the Corning Glass Works was getting established in its new home. 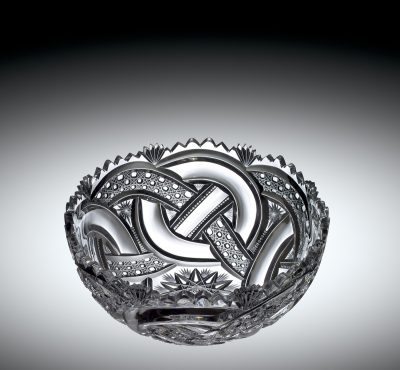 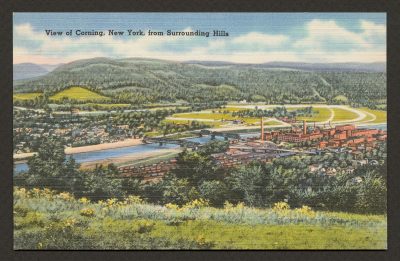 “Today, Corning is synonymous with glass,” said Kelly Conway, curator of American glass at CMoG. “The gallery renovation will include stories of the makers, innovations, and brilliant marketing strategies that made Corning’s cut and engraved glass unparalleled in the world. The newly refreshed Crystal City Gallery will connect people to the stories about Corning’s origins as a center for glass with a focus on the history and innovations that led to its emergence as the ‘Crystal City.’”