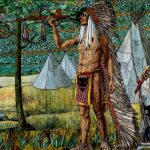 Logan Pappenfort met us in the lobby of the Peoria Tribal Headquarters in Miami, Oklahoma. I’m the Director of Education and Interpretation at the Corning Museum of Glass, and with me were a video producer and two videographers from the museum. We had come to talk about Tiffany’s mosaic mural in the Marquette building in Chicago. The mural features imagined scenes of Jacques Marquette (French, 1637-1675) and Louis Joliet’s (French-Canadian, 1645-1700) journey down the Mississippi River. Logan’s ancestors helped Marquette and Joliet travel safely on the river south of present-day Wisconsin, sending a peace pipe and the son of a tribal chief on the trip as evidence that the expedition was a peaceful one.

The search for a Peoria Tribal cultural historian began when we realized the American Indians in the Marquette mural were supposed to represent members of an Illinois Confederacy that included the Peoria tribe, but the figures in the mural were dressed as Plains Indians, wearing things the woodland Peoria people would never wear. There are teepees in the Marquette mural too, but the Peoria lived in wooden long houses. We could have explained this in the exhibition we were planning, Tiffany’s Glass Mosaics, but we thought it was important to hear directly from the descendants of the people the mural was supposed to represent. Logan, the Historic Preservation Officer for the Peoria Tribe and a Peoria Tribal member, agreed to talk with us on camera, but he couldn’t travel to Corning, New York. Logan is in charge of elder care and disability for the tribe, Native American Graves Protection and Repatriation activities, tribal transportation, Section 106 of the National Historic Preservation Act requiring Federal agencies to account for effects on historic properties, and special projects. He’s a busy guy. So two videographers, a producer and I made the journey, along with a van full of equipment, to Miami, Oklahoma.

In a conference room at Peoria Tribal Headquarters, Logan and I talked about the mural. He was incredibly generous. “It’s fitting that American Indians are such a prominent part of this mural,” he said. “They were a huge part of it.” During a break, I posited a theory. At the same time the Tiffany mural was created, wild west shows like Buffalo Bill’s Wild West Show were very popular. The shows featured cowboys and Indians, and employed Native Americans from all over the country. Many of the shows paid Native Americans the same wage that non-natives commanded. But all of the Native Americans in the shows, no matter what tribe they were from, were dressed as Plains Indians. Could this help explain the stereotype that appears in the Tiffany mural?

Logan agreed. “I have a picture of a relative of mine who worked in a wild west show,” he told me. My heart skipped a beat. “What was he wearing?” I asked. “He was dressed as a Plains Indian,” Logan said.

Back in Corning, we made the video interview with Logan part of the Mosaic Theater in the Tiffany’s Glass Mosaics exhibit. During our annual Seminar this year, also about Tiffany’s mosaics, a scholar from Accrington, England, made a presentation about Joseph Briggs, who emigrated to the United States from Accrington and eventually worked for Tiffany. But that was not his first job in the U.S., I learned. He toured with Pawnee Bill’s Wild West Show for two years before he signed on with Tiffany, demonstrating how pervasive the shows and the stereotypical images were at the time. 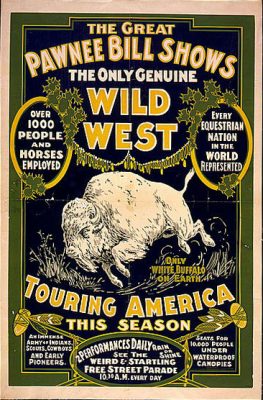 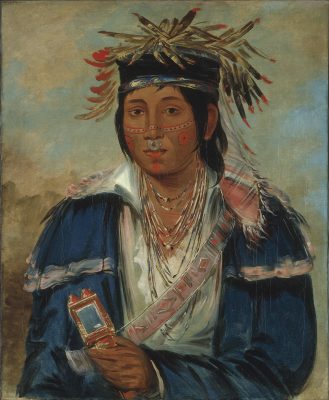 The stereotype of all American Indians as Plains Indians may have its roots in wild west shows of the time. So what harm does a stereotype like this do? American Indian culture is varied and rich, with a longer history connected to this place than non-natives. To make one story, the story of Plains Indians, the only story of American Indians is to lose that richness, and prevents us from understanding and appreciating a resilience and diversity that is truly and uniquely American.

Watch the interview with Logan Pappenfort: