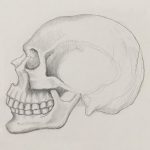 In honor of the impending season of Halloween, All Souls Day, and Day of the Dead, let us dwell for a moment on the peculiar and interesting topic of death and glass. In the Rakow Research Library of The Corning Museum of Glass’ Curious and Curiouser exhibition, you will find three examples of glass being used to contain human remains. In the American Glass Casket Company Catalogue (probably from 1921), we see described the “Largest Glass Press in the World.” We’re told that this machine, installed in the plant of the American Glass Casket Company in Ada, Okla., is adjustable for the pressing of glass for all sizes of glass caskets. There are some other interesting examples of references to glass caskets in The Corning Museum of glass as well. (See this blog post from 2012 on glass coffins, and this pamphlet about glass coffins from the Rakow Library.)

For me, the idea of a glass casket conjures childhood memories of Snow White being attended by her seven loyal dwarves. Since the original Grimm’s fairy tale entitled “Little Snow White” was published in 1812, that made me wonder when the first glass coffins were made. An internet search led me to J.R. Cannon who patented a design for a glass coffin in 1859 within which an embalmed body could be hermetically sealed so that relatives and friends would be able to view the deceased “for years to come.”

How many years? I asked myself. How long could a body really remain in good condition under these circumstances?

Transparent coffins may have been made in ancient Egypt from glass or a colorless stone like rock crystal, but since no examples survive we can’t be sure. There is an example of a child’s coffin with a glass viewing window from the 1870s which has been in the news recently where the face of the girl is quite beautifully preserved.

This coffin was not completely made of glass, but clearly, glass has often been thought of as a material to contain, protect and view human remains, allowing loved ones to feel close to the dearly-departed. Though I didn’t find any examples of actual glass coffins from as early as 1812, the poetry of the idea was already in place in that “Grimm” fairy tale about Snow White. In 1903, a certain J. Karwowski patented the design for another method of preserving the dead in glass, and this patent is our second glass-and-death related item in Curious and Curiouser. The plan consisted of coating a fully-clothed, dead body in something called water glass or sodium silicate, drying it out and then casting a large block of molten glass around it.

This was meant to result in a perfectly preserved, natural-looking corpse for posterity. There are some interesting bits of logic to Karwowski’s plan. Water glass is used as a desiccant and to seal eggshells to extend freshness, but it’s hard to imagine that, even if perfectly sealed, the clothed body would look at all natural after being coated in the wet sodium silicate and then dried out, much less after being exposed to the elevated temperatures required to cast glass around it. Karwowski did not produce any samples of his proposed invention and, though the idea may have seemed brilliant enough to need patenting at the time, it has never caught on in practice. The third method or preserving the dead in glass that visitors to Curious and Curiouser can see is a reliquary in the form of a birdcage filled with glass marbles. A reliquary is a container made to hold a relic or a fragment of a holy person, and artists today sometimes use the concept of the reliquary symbolically, containing objects that are in some way significant to our culture.

The marbles in this reliquary are made from glass which incorporates some of the funerary ashes of renowned American glass artist Richard Posner (1948-2011). After Posner’s death, the marbles were made as a tribute to him by his friend Richard Marquis. The reliquary was donated to the Museum by Marquis, by Posner’s ex-wife, and by the executors of Posner’s estate.

We often look for ways to hold onto a sense of connection with our loved ones after they have passed. The beauty, durability, and transparency of glass make it appealing as a material to contain, protect, view and honor their remains. The Curious and Curiouser exhibition at the Library of The Corning Museum of Glass makes for an extraordinary stop during this season of remembrance. Come in for a visit to see these and other inspiring finds from The Library’s collection on display until February 17, 2019.