The Contemporary Art + Design Wing at The Corning Museum of Glass (CMoG) is almost exclusively lit using natural light. With close to 1,000 skylights, the space is startling in its brightness. Tall, white walls sweep through the gallery like a sheet billowing in the wind, and hidden in its folds, nestled like a secret pocket, is the Special Projects Gallery. A room with a small footprint, this gallery nonetheless commands a towering sense of space. Conceived to show large-scale installations, it is home to Norwood Viviano’s Global Cities until September 2018. 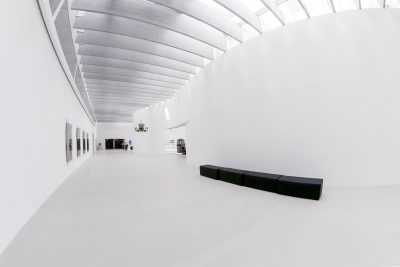 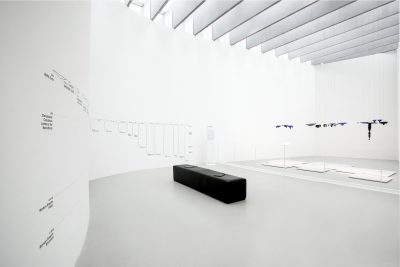 Viviano is an American artist from Michigan, who first studied glass at Alfred University, near Corning. Global Cities is his first piece in the CMoG collection.

Global Cities is an expansive visual depiction of population growth and decline as experienced by 32 cities. Represented as a unique, hand-blown glass form suspended above a map, the shape of each city signifies population fluctuations from founding to modern day. A long, delicate tail of thin glass, like the one trailing beneath the body of Rome, indicates an extensive history, stretching back thousands of years. But shorter, disc-like bodies, like Shenzhen, China, are the opposite: new cities where the population has grown quickly over a very short time.

Completing the piece is a graphic timeline adorning the walls of the gallery, highlighting remarkable events in history, like the fall of the Roman Empire or Columbus sailing for the New World.

Viviano believes his project “requires a certain amount of time and engagement from the audience.” It’s an apt notion for an installation that serves to visualize time; to condense thousands of years into fragile strands of glass. But the piece does demand a commitment. Not only to connect the dots from one city to its corresponding mark on the map, but also to understand history. As you look from the timeline to the installation and back again, you begin to piece together similarities between places that on the surface appear to have no connection. Like a geographical land bridge that existed centuries ago, once connecting continents that now reside oceans apart, connections do exist between cities separated by culture, language and thousands of miles. Mostly notable is the devastating effect of World War II on cities like Tokyo and St. Petersburg, or the resulting baby boom that led to a population surge in London after 1950.

How people interact with the piece as individuals is an important aspect to Viviano. He says, “I think there is a way of thinking about it from a personal point of view, how you relate to your place, a place you are familiar with, and then how that place also relates to other places in the world.” From that intimate starting point, the project grows to include larger groups. With an international mix of visitors to The Museum, from across Europe, Asia, and beyond, Viviano’s work reaches a truly diverse audience in Corning. “It has always been important to me that the work connect in some way to the community it’s exhibited in,” he says, “but to have a much broader reach as well.” Viviano added the city of Mumbai to the Global Cities installation once it was acquired by CMoG, recognizing and celebrating The Museum’s ever-increasing visitation from India. Viviano explores many themes in his work. Is time fragile? Are facts fragile? The ambiguity of these concepts and the fragility of glass make for a unique partnership. “I often think of glass as this amazing material that is incredibly fragile,” Viviano says, “but these pieces are so thin in some ways, that they are flexible. So, they are less fragile than you might imagine. But the use of glass in a project like this, ties back to the fragile balance of community. I think it’s OK for glass to be the thing that draws people into the conversation about the work— but the forms are — not just about their shape, they’re about a whole bunch of layers of meaning.”

As glass and truth prove to be both fragile and flexible, Viviano’s work reveals its complexity. Art opens the door to science and vice versa. “You can take in all of the blown glass forms, or you can really study all of the data sets and information on the wall,” he says. “Or you can stand in the middle and experience both.”