Come one, come all, to see amazing feats of glassworking! For more than 300 years, talented, traveling glassworkers entertained and educated crowds on the art, science, and skill of glassmaking, and the dizzying array of wonders that could be made completely of glass. Add in a dancing competition or a beauty pageant and the event is a guaranteed hit. Intrigued? Here are six weird and wonderful things you might have seen at one of these shows.

1. Working glass steam engines
Functional steam engines made of glass were the stars of the 19th-century itinerant glassworker’s show. Made of hundreds of small pieces, these dazzling glass engines fascinated audiences. They were both a feat of glassmaking and a method for demonstrating how steam engines functioned during a time when real steam engines powered machinery and many modes of transportation. Soon after the first engines became a hit, every traveling glassworking troupe had at least one of their own. 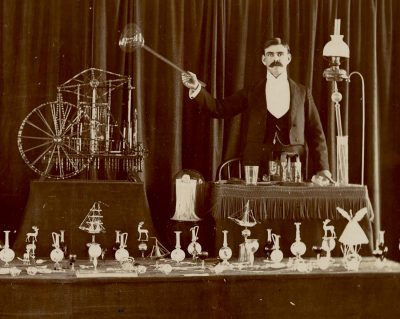 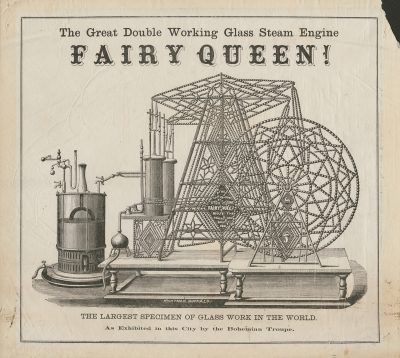 One of the most popular steam engines of the time, the Fairy Queen was a major draw for audiences. CMGL 45696. 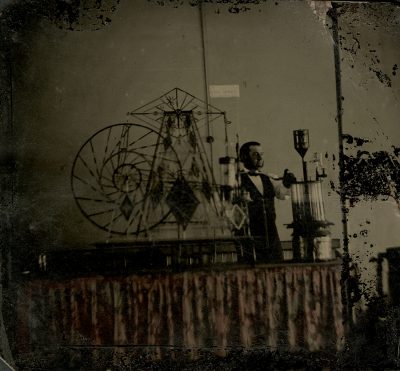 This is the earliest-known photographic image of a glass steam engine. The engine may be the Fairy Queen, and the man may be a member of one of the many Bohemian Troupes traveling the United States. CMGL 137821.

These glass engines were not simple models, but colorful, inventive delights. Their names alone conjure a sense of whimsy: the Fairy Queen, Excelsior, Queen of Beauty, the Australasia, the Crystal Gem. Troupes gave prizes to those who composed the best poems about their engines, and fans did not disappoint. Here are a few lines from a poem by a William Somers:

When will wonders cease, we may justly enquire, / When we see a Glass Engine, complete and entire, / … Incredulity starts, in most utter surprise, / We can hardly believe the plain sight of our eyes, / … The steam from the boilers sends life to the heart, / And life it goes bounding throughout every part.

Several contemporary artists have been inspired by the glass steam engines and their makers, including Bandhu Dunham. His kinetic sculptures series includes The Crystal Gem, seen in motion here.

Additional images of these steam engines, along with a modern version inspired by the 19th-century models (seen above), are on display in the Rakow Library’s current exhibition, Curious and Curiouser: Surprising Finds from the Rakow Library.

2. Glass thread spun at thousands of yards per minute
Today the word “fiberglass” brings to mind insulation, boats, bathtubs. It’s manufactured in large quantities and used in all sorts of practical applications. But for many hundreds of years, glass fibers were an integral part of itinerant glassworkers’ shows. As early as the 1600s, one glassworker advertised that he could spin, “10,000 yards of glass in less than half an hour.” A century or two later, glassworkers were claiming they could spin a pound of glass into millions of yards of thread at the rate of thousands of yards a minute. The end result was “infinitely finer than silk and equally as elastic and flexible.” 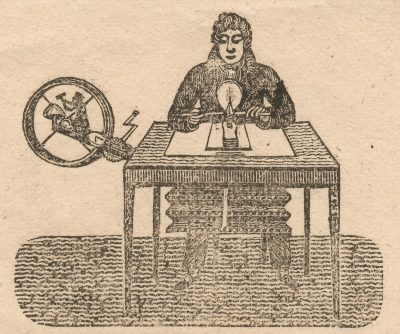 Mr. Hermann demonstrates flameworking. The wheel on the left is for spinning glass fibers. CMGL 112177. 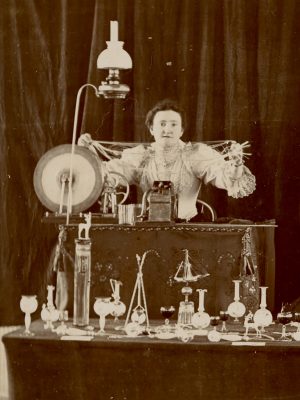 A glassworker, possibly Mrs. F.A. Owen, holds up spun glass. You can see the wheel used to make the fibers to the left. CMGL 131372. 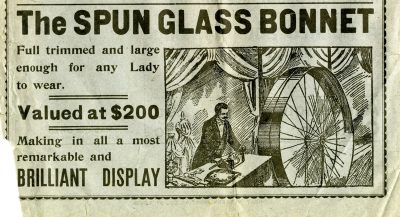 F.A. Owen spins glass on a much larger wheel. Behind him is a dress and other items made from spun glass fibers. CMGL 131361.

Itinerant glassworkers spun this glass thread using a special spinning wheel. Some went a step farther and wove the threads into neckties, bonnets, shawls, and dresses. One bonnet was so famous it went on its own tour of post offices across the United States. 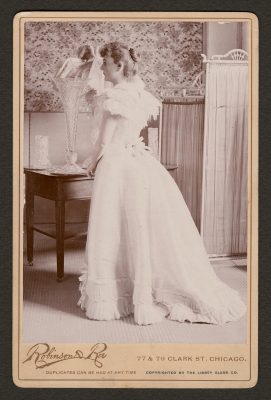 Spun glass was also used to make this dress for Princess Eulalia of Spain. Glassmakers at Libbey Glass Co. wove the spun glass with silk to form the fabric of this nearly 14 lb dress. CMGL 134150, gift of R. Smith and Bill Sheriff.

See more examples of fiberglass used in textiles in Curious and Curiouser, on display in the Rakow Library until February 2019.

3. Scientific experiments like Cartesian divers
The earliest known itinerant glassworkers incorporated scientific experiments like Cartesian divers into their demonstrations. Often, they would describe the movement of the “divers” as magical – the glass figures would supposedly respond to the commands of the glassworker (rather than to the pressure applied to the top of the glass tube). One glassworker claimed the figures in his glass container would obey commands in four different languages! 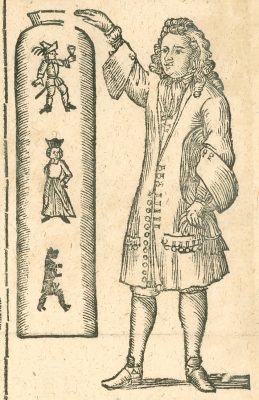 This early itinerant glassworker claimed the figures in his Cartesian diver bottle responded to his commands, rather than to the pressure he is applying to the top of the container. CMGL 112252. 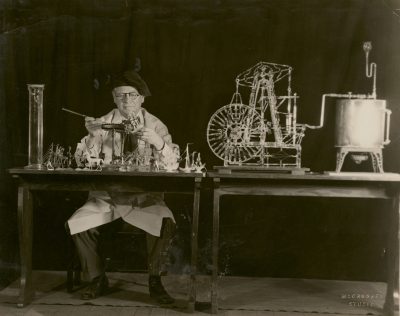 John Backman flameworks a ship with a steam engine on one side and a Cartesian diver on the other. CMGL 152150. 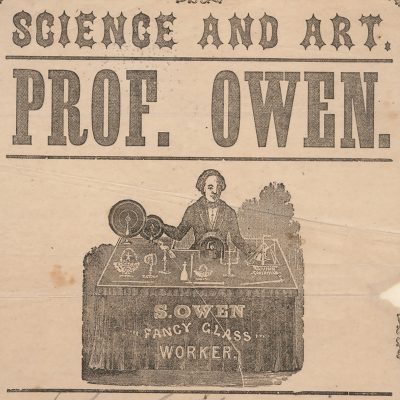 S. Owen styled himself as a professor and featured many scientific experiments and displays in his exhibition. He also gave lectures on natural philosophy. CMGL 142780.

By the mid-1800s, audiences were hungry for scientific knowledge, and some glassworkers centered their entire shows around science and natural philosophy. Professor S. Owen gave a lecture on natural philosophy, all while demonstrating the “action of water in vacuum” with a philosopher’s hammer, the “principle on which thunder is produced” using vacuum bulbs, and the “elasticity of the air” with balloons. Other popular experiments included pulse glass circulators, cryophorus deception glasses, and hydro-pneumatic fountains.

This spring we made a Cartesian diver using glass and a rubber top, similar materials to those itinerant glassworkers may have used.

4. The celebrated Glassoblowoprestitwistigitator
He’s positively supercalifragilisticexpialidocious! Actually, this title was used by at least two different glassworkers in the 1800s: William Woodroffe and W. Jerome Earl. It’s uncertain what these men did to merit this mouthful of a title, but it certainly sounds exciting. 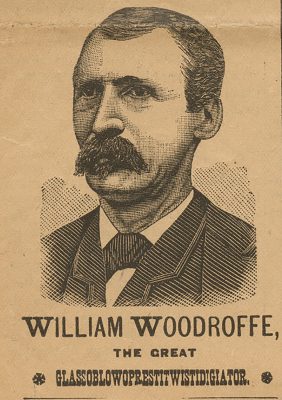 William Woodroffe, one of the Woodroffe brothers, used this title while a member of Madam Nora’s troupe. CMGL 112113.

W. Jerome Earl was another glassworker who claimed the Glassoblowoprestitwistigitator title. He was a member of Madam Reith’s troupe. CMGL 45698.

5. Ships, trains, fire engines, and … skeletons?
Beyond glass steam engines, itinerant glassworkers built all sorts of models and machines from glass. Just a few examples include: models of famous ships, well-known monuments and bridges, and carriages pulled by sets of horses. 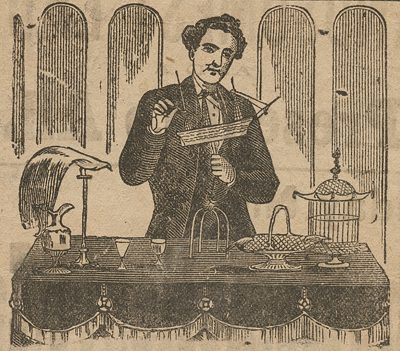 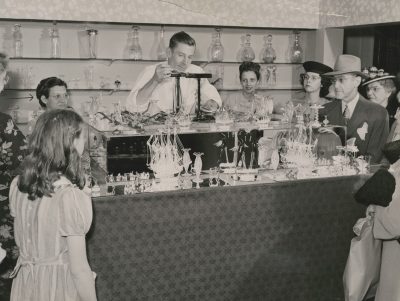 Scott, a British glassworker, included a “beautiful Hydraulic Skeleton, in Glass, which is kept in continual motion by itself, showing how the blood passes through the different channels of the human frame.” It was so spectacular, apparently, that it was “patronized by the Royal Family, and every Family of distinction in England.” The Columbia, a hand fire engine, could reportedly shoot
streams of water 15 feet into the distance. CMGL 112113.

The Woodroffes displayed a glass train, powered by steam, that ran around a track “eight feet in diameter.” The train carried two cars and a coal car, also made of glass, and was able to move at a speed of six miles per hour. It was, according to them “one of the wonders of the nineteenth century.”

Madam Nora’s troupe promoted the Columbia, a glass hand fire engine that was reportedly able to spout a stream of water 15 feet into the distance. It’s one of the few of these models and machines that have survived until today — you can see Columbia, and the glass steam engine Excelsior, in the Lightner Museum in Florida.

6. Beautiful babies, homely men, and talented dancers
During the 1800s, many glassworking troupes added other entertainments to their shows. These included everything from lectures and dances to competitions with glass prizes. The homeliest man and the best male dancer won Turkish pipes at one show in Massachusetts, and troupes led by the Woodroffe brothers gave prizes to the “best comic singer,” “best jig dancer,” “best lady dancer,” and the “handsomest lady,” among others. 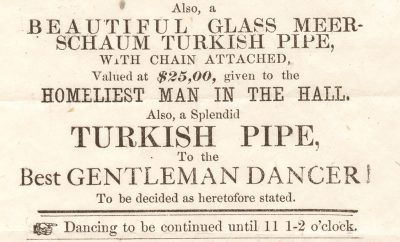 Dances were a popular way to engage audience members after the glassworking show. CMGL 61257. 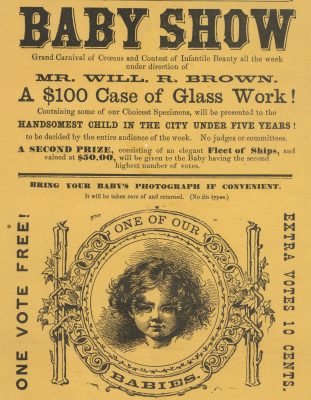 Bizarrely enough, baby beauty shows were another popular event associated with several glassworking acts. Who would have guessed? CMGL 151258.

Perhaps the oddest add-on was the baby beauty pageant (or, as one advertisement put it, the “Grand Carnival of Croesus and Contest of Infantile Beauty”). Both the Woodroffes and Madam Nora’s troupe held these competitions at their shows, and gave cases of their best glass to the winners and runners up.

These are only a few of the curiosities audiences could see when they attended an itinerant glassworkers’ show. See many of their advertisements in the Curious and Curiouser exhibition at the Rakow Library, and read more about these unique entertainers on our blog.