If you’ve had a chance to visit our changing exhibition, Tiffany’s Glass Mosaics, you’ve likely been mesmerized by the glass mosaics on display. Louis C. Tiffany’s innovative approach to the art form produced stunning mosaics that continue to dazzle and impress. Glass workers have been making mosaics for over 2,000 years. In fact, Tiffany himself was impressed and inspired by the traditional mosaics he saw and studied on his travels, such as to the Church of San Vitale in Ravenna in northern Italy.

The Corning Museum of Glass’s collection includes examples of glass mosaics that span from the Roman period to the present day. We have highlighted some of our personal favorites here.

An Early Christian Glass Mosaic Panel
This object is all that survives of a larger mosaic composition. It was made from large, flat glass pieces called opus sectile. The glass worker cut these tiles and set them into a sticky resin, backed with pieces of broken ceramic pots to help stabilize the composition. The central bearded figure is Thomas, identified by the Greek letters Θωμας. He could represent the Apostle Thomas, one of the 12 disciples of Jesus, or the individual who paid for the mosaic.

Many of Tiffany’s techniques for adding texture and visual interest to mosaics are evident in this panel, made more than 1,500 years earlier. Purple and white swirled and twisted sections of glass form the curls of Thomas’ hair and beard. The letter Ρ (Greek rho), set in a cross and inscribed in a circle, was made from gold foil sandwiched between clear glass. 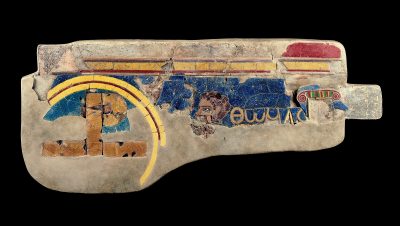 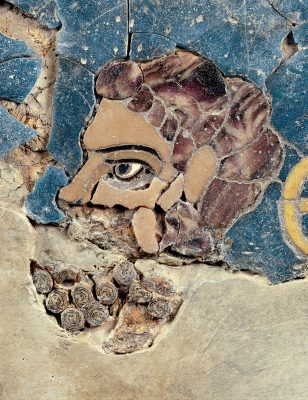 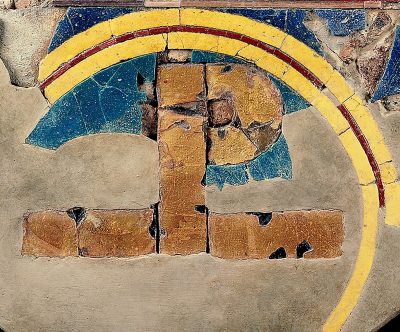 A Glass Mosaic Table of Mosaic Glass Fragments
This table demonstrates the difference between the terms glass mosaic and mosaic glass.

In antiquity, glassmakers made mosaic glass using a process known to modern glassmakers as murrina. By bundling together glass rods of different colors, they created elaborate patterns of flowers, swirls, and even people and animals. These bundles were then heated up, fused together, and stretched out, miniaturizing the pattern. The final step was to cut each rod into small cross-sections. Ancient mosaic glass began during the Hellenistic period and became more popular during the early Roman empire for cups, plates, and decorative inlay plaques for walls and furniture. We call this process mosaic glass. 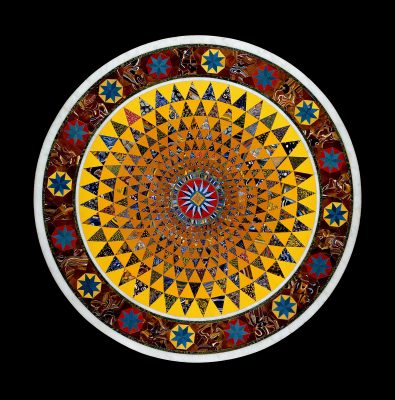 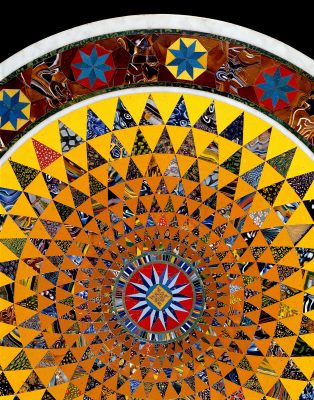 In the 19th century, Giovanni Rossignani, a craftsman who worked for the Vatican Mosaic Workshop, was inspired by the ancient mosaic glass he found around Rome. By cutting and heating broken pieces of ancient mosaic glass vessels, he made flat geometric shapes and assembled them on a disc of white marble. In glass mosaic, the pieces are held together with cement or another binding agent, rather than being heated and permanently fused together. The resulting tabletop is a mosaic of mosaics.

A Sculptural Mosaic Panel with Fish
At the same time Tiffany was developing innovations in the ancient technique of mosaic, Leopold Forstner established the Vienna Mosaic Workshop (Wiener Mosaikwerkstätte) in Vienna, Austria. Like Tiffany, Forstner was known for developing new approaches to the art form. He constructed three-dimensional, sculptural mosaics by combining materials like glass, enamel, metal, ceramic, and concrete. 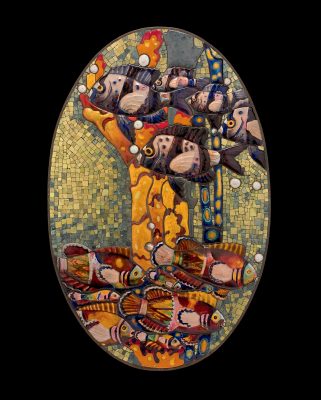 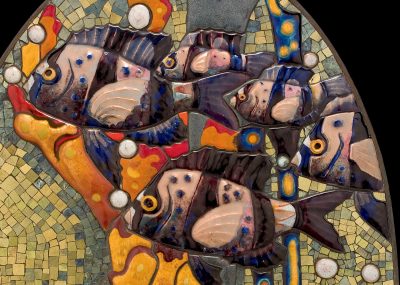 In this oval mosaic panel, molded copper with enamel is combined with glass tesserae to capture the effects of light interacting with the mosaic’s sculptural surface. Collectively, the choice of materials and the bright color palette animate the underwater scene, evoking the phenomenon of shimmering light reflecting off the scales of swimming fish. Forstner’s innovative approach revived the traditional art of mosaics in Austria while simultaneously capturing a new, modern aesthetic. Ann Gardner’s composition, Fog, includes more than 100 hanging pod-shaped forms made using traditional mosaic tesserae in an unconventional manner. Just like the dazzling mosaic column that greets visitors to the entrance to Tiffany’s Glass Mosaics, this sculpture demonstrates a shift in mosaics from a flat, two-dimensional surface to a curved, three-dimensional one. To construct these mosaic forms, Gardner glued metal leaf onto the backs of colored sheets of glass. The sheets were then cut into small squares and each square was painstakingly applied to the pods’ surfaces, creating individual elements entirely covered in shimmering mosaic tesserae.

Most mosaics are incorporated into architectural installations or are independent panels (like Tiffany’s Mosaic Panel with Peonies), but these mosaic elements comprise a contemporary sculpture. The pods, which hang from two metal circles above, gently sway with the movement of those who pass by. Their gentle motion and shifting hues of gray and white work in harmony, calling to mind the glimmering nature of clouds and fog. 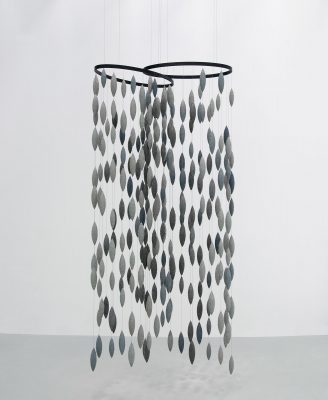 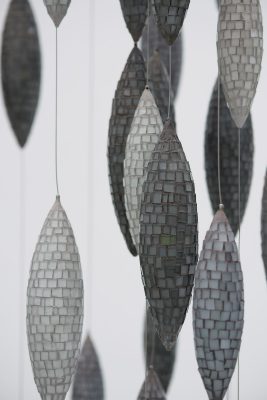