This post comes from Colette Peavy and Pascual Ruiz Segura, Rakow Research Library interns working on the conservation of the Whitefriars stained glass cartoon collection over the summer of 2017, in conjunction with West Lake Conservators. Read more about this project and the collection in previous posts.

As summer begins to wind down, our internship is quickly approaching its end. This last month has been filled with activities and lots of stained glass cartoons! We officially finished the 52 items in the Liverpool roll, and have moved on to mending a few very large objects from Church of the Heavenly Rest. We had the opportunity to visit several churches in New York City in July.

Church of the Heavenly Rest
The cartoons from Church of the Heavenly Rest are the largest we’ve treated this summer. The longest are over 9 feet (3 meters) in length. While this is a large size, it’s important to remember that each cartoon represents only a small portion of the entire window. The cartoons contain intricate, geometric designs as well as religious iconography, done in ink and watercolor. They are incredibly colorful, but they did not prepare us for the windows themselves. The windows are huge! The colored glass was more vibrant and varied than what was depicted in the cartoons. The majority of the windows are done in deep blues, and each window contains less blue glass as they progressed clockwise around the nave. Reverend Tuesday Rupp gave us a tour, and explained to us that the windows got lighter as the story of Jesus’ life progressed. We were able to go up to the triforium and see the windows up close. We even found the little white friars in the corner of the windows – the signature of the company. 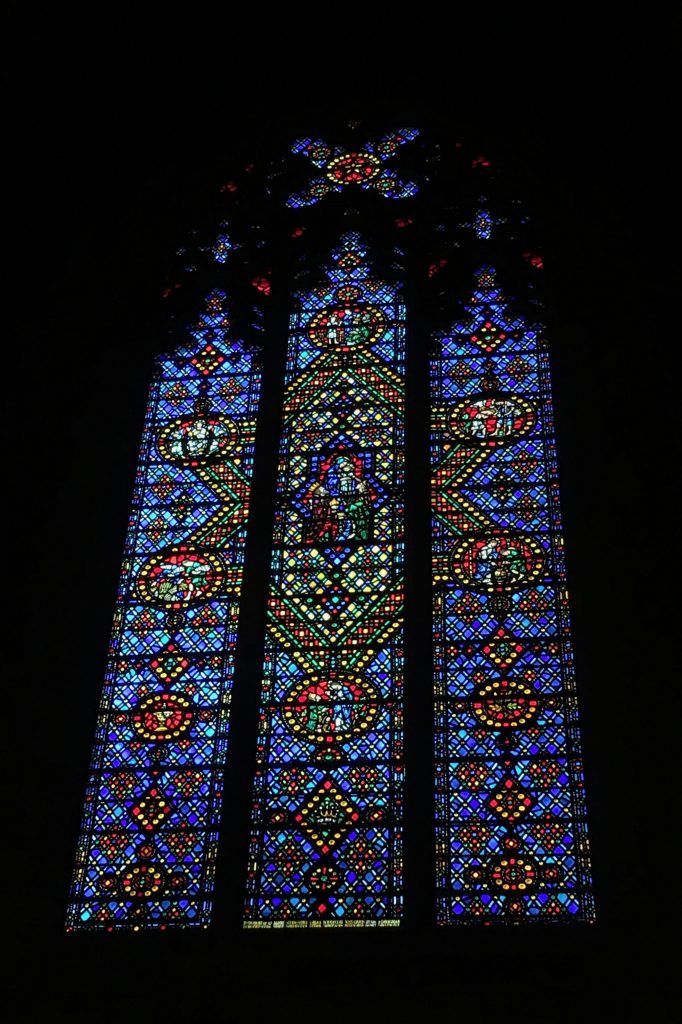 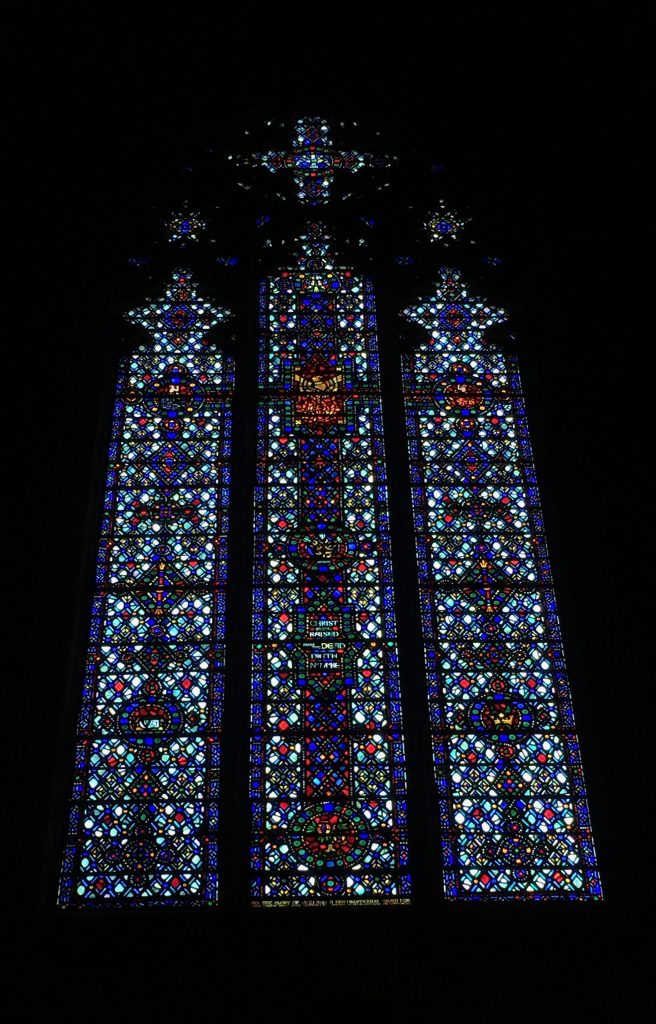 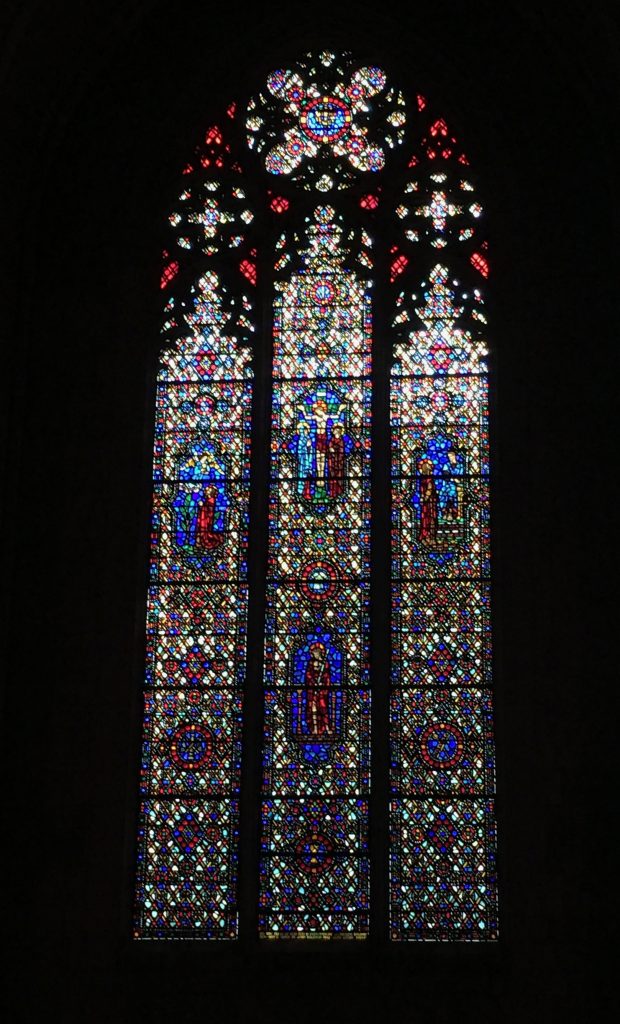 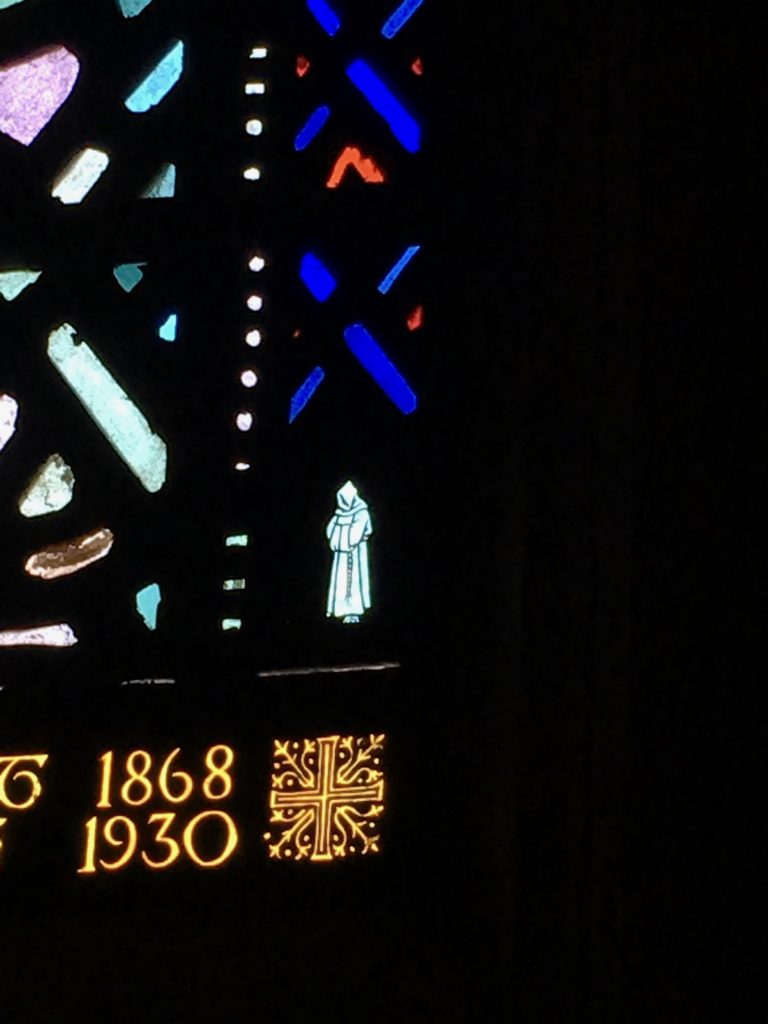 A white friar in the bottom of one of the windows from the Church of the Heavenly Rest. 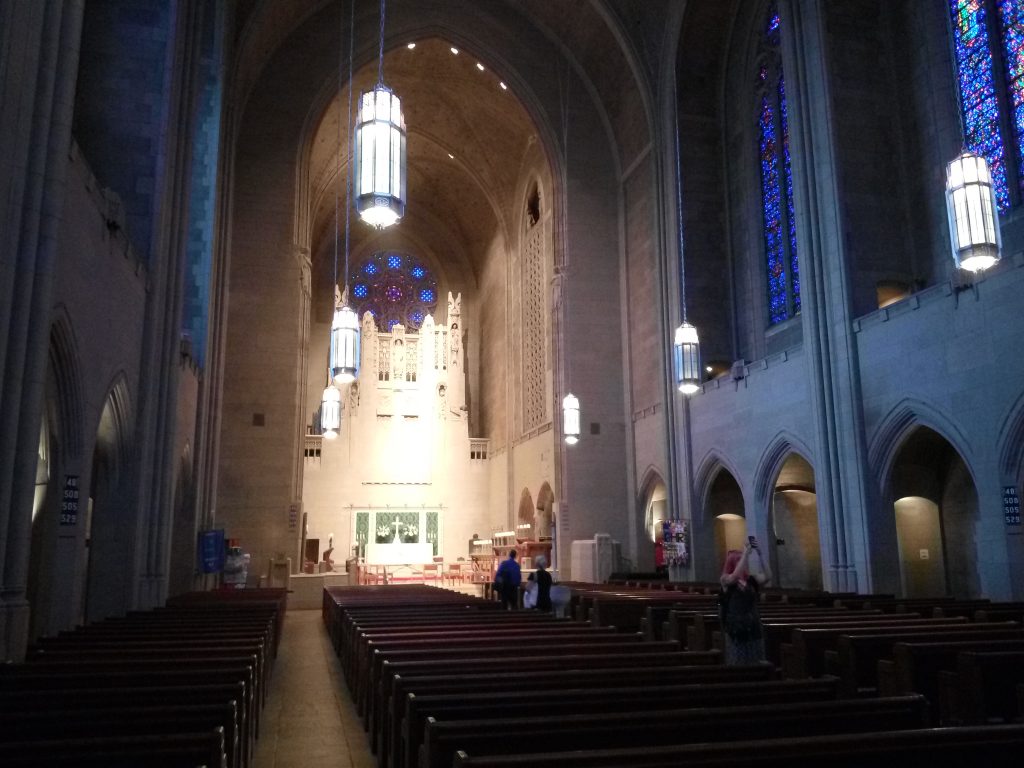 The interior of the Church of the Heavenly Rest.

We also had the chance to see a mosaic made by James Powell and Sons (Whitefriars). This was the first mosaic we had seen by the company, although an early advertisement we found does say that it was one of the products they offered. The company had a distributor located on 5th Avenue in NYC, roughly two miles from the current church. A mosaic made by James Powell and Sons (Whitefriars).

Temple Emanu-El
After our visit to Church of the Heavenly Rest, we walked to Temple Emanu-El. 2016 Whitefriars interns Laura Hashimoto and Bonnie Hodul treated some cartoons for these windows. Chief Librarian Jim Galbraith has an ongoing correspondence with Temple Emanu-El, and has visited several times. The largest synagogue in the Western hemisphere, Temple Emanu-El is truly stunning. Warren Klein, Curator at the Herbert & Eileen Bernard Museum of Judaica at Temple Emanu-El gave us a tour.

Trinity Memorial Episcopal Church
Whitefriars windows are found all over the world, and all over the United States. After our visit to New York City, we had the opportunity to visit a church a little closer to home: Trinity Memorial Episcopal Church. The church, located in Binghamton, N.Y., had an undiscovered Whitefriars window. This past April, a photographer pointed out the small, signature white friar in the bottom corner of the window. Associate Librarian Lori Fuller reached out to the church just two weeks after the photographer identified the window as a Whitefriars commission. All of the windows in Trinity Church are memorial windows, done in various styles and by different people.

Read more about the windows of Trinity Church. 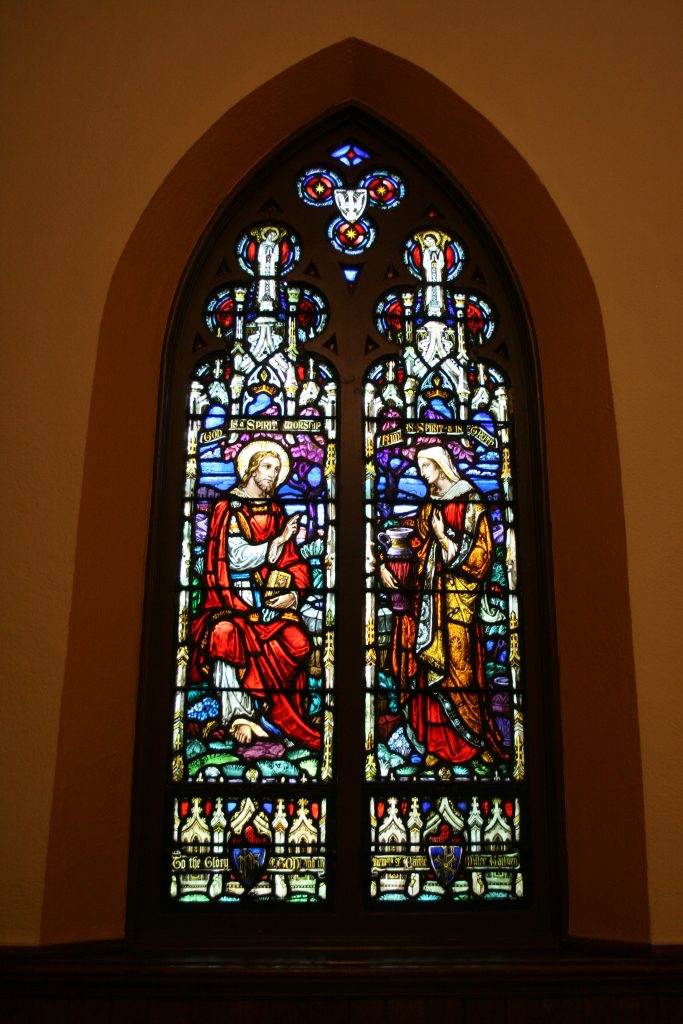 The window directly to the left of the Whitefriars window. This window, and many others in the church, were designed by Nicola D’Ascenzo. 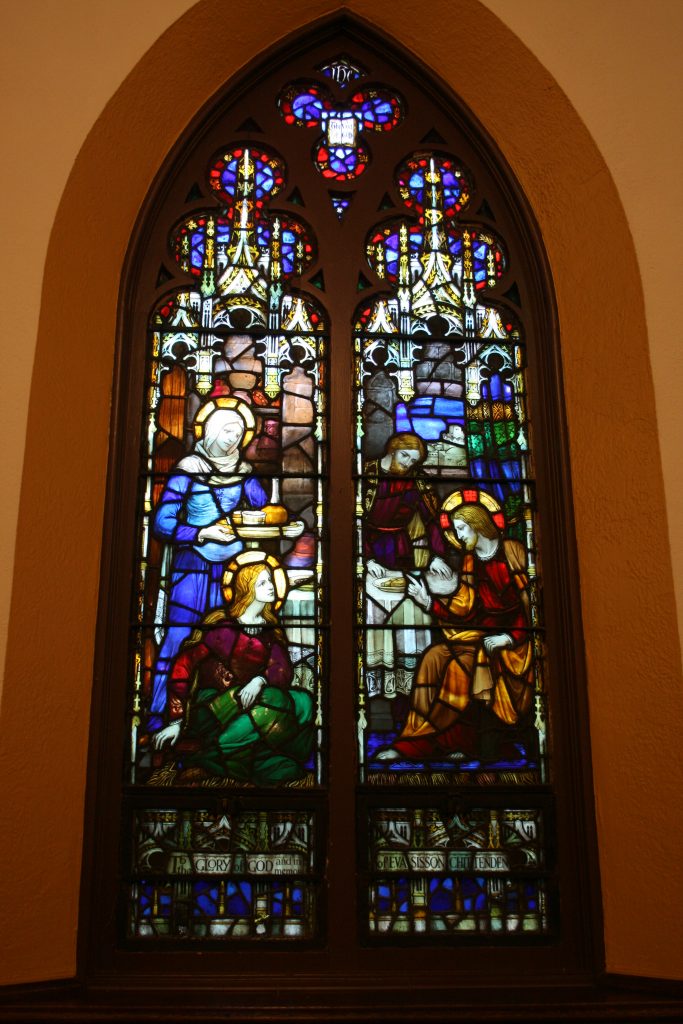 The full Whitefriars window at Trinity Church in Binghamton, NY.

We treated the cartoon for the left side of the Whitefriars window. The cartoon was done in black and white, so we had no idea what colors were used in the window. It is always a treat to see the windows in person, as the cartoons do not do justice to the vibrant colors of the windows themselves. The cartoon was found in a roll labelled “Binghamton,” and contained two other cartoons: one from Calvary Church in Summit, N.J., and another simply labelled “Pennington Church.” The cartoons depict the Parable of Jesus at the home of Martha and Mary. The window at Trinity Church does too, but we did not find the cartoon for the right half of the window. Left to Right: The left side of the window at Trinity Church and the cartoon we treated this summer.

When we arrived, several members of the congregation were already there. Chief Librarian Jim Galbraith gave a talk about the history of Whitefriars and the Rakow Library’s collection. Moya Dumville, a paper conservator from West Lake Conservators who consults on the Whitefriars project, discussed conservation with some of the congregation. Two local TV stations and a newspaper reporter covered our visit.

Watch a video from WIVT/News 34 Binghamton and read WBNG Binghamton’s story about our visit to see the window.

We still have a few more weeks left in our internship. We continue to work on conserving cartoons and drawing the connections between the drawings and the finished windows. These site visits are an important part of the project, as it allows the Rakow Library to form local and global connections, and spread knowledge about Whitefriars windows.

Look for the interns’ final post about their time here this September, and follow the progress of the 2017 project on social media.