The Corning Museum of Glass has named Dr. Karlyn Sutherland, a Scottish emerging artist, as the recipient of the 32nd Rakow Commission. She is known for evocative sculptures, fused wall pieces and site-specific installations that explore the emotional power of place. Originally trained as an architect, Sutherland describes her work in glass as an extension of the sensibilities and skills she honed as an architectural designer. Her autobiographical work “is a reaction to vivid memories and intangible qualities of significant moments,” she says. “Each piece aims to evoke architectural space and atmosphere, distilling and communicating the essence of an experience.”

“One of the things that drew me to Sutherland’s pieces initially was how hard they were to capture in photographic media,” says Susie J. Silbert, curator of modern and contemporary glass. “I was intrigued by what it might mean to have work that stretched our perceptions so far that you couldn’t comprehend it just by looking at a representation. Her pieces need to be seen in person to be fully understood—they appear like the digital world popping into the physical world.”

Sutherland earned her Ph.D. in Architecture from the University of Edinburgh in 2014, and it was her research into the bond between people and places that led her to glass. Keen to better understand her own sense of attachment to place, she returned to her hometown of Lybster, Caithness in the north of Scotland, which is also home to the internationally-renowned North Lands Creative Glass. 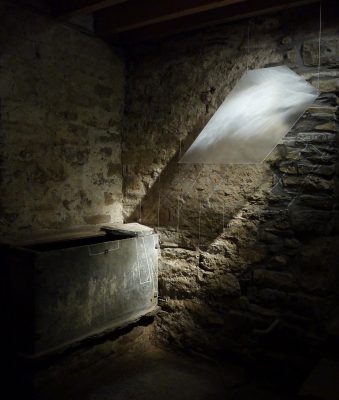 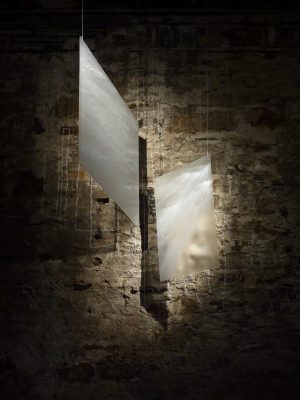 Intrigued by the power of the school and the attachment that visiting artists developed to the location, she enrolled in Jane Bruce and Bruno Romanelli’s kiln-forming master class Light + Colour = Form. While she only intended to be an observer at the school, she became entranced by the material of glass. Since then, Sutherland has continued to engage glass in increasingly ambitious ways.

“Glass is an evocative material, able to readily convey atmosphere, emotion, and narrative,” Sutherland said. “It has the ability to reveal memories, generate associations, and encourage the imagination in ways that other mediums often cannot. The haptic, hands-on act of making is contemplative—a tool which allows me to explore and strengthen my own relationship with (and understanding of) place.”

In the spring of this year, Sutherland spent a month at The Studio of The Corning Museum of Glass as an Artist-in-Residence. During her time there, she further explored applications and installations of glass both within architecture, and on an architectural scale, with a particular focus on the transmission, reflection, and refraction of natural light. “To learn in the midst of the residency at The Studio that I had been selected for the Rakow Commission made my first visit to Corning all the more special,” said Sutherland. “It’s a huge honor and a very surreal feeling to be joining such an illustrious list of names, both in terms of previous recipients and the line-up of other artists whose work is also held within the museum collection. I’m incredibly grateful for this opportunity—I think it’s going to be liberating, and I’m really excited to begin exploring new directions within my practice.”

For the Rakow Commission, Sutherland will further explore a theme she began with the work Raigmore, Inverness (1) in 2015, which focuses on the tension between perspective drawing, common to architectural design, and the physical experience of space and atmosphere. In this series, which was featured in the influential exhibition European Glass Context 2016, the work defies easy comprehension – although identified as glass, each piece looks like a digital rendering. This struggle to comprehend the work is by design. Unlike her earlier pieces, which sought to find architectural remedies to combat the increasing sense of detachment created by modern architecture, this series actively seeks to amplify it.

“The work that I’ll make for the Rakow Commission is part of a series that draws upon my own experience of a sense of disconnection from place,” Sutherland said, “and uses the physically unattainable perspectival view as a tool to consider and evoke feelings of detachment, suggesting spatial experiences that are inaccessible and unreachable, both physically and temporally. Through simultaneously exploring a sense of illusion and a spare, minimal aesthetic, the works are emotionally distant, telling of atmospheres of quiet discomfort.”

The piece Sutherland will create is based on a memory of her childhood home, and the sense of detachment she felt after having left it behind.

“Sutherland is among the most expansive thinkers of the current generation of young artists working in glass,” said Silbert. “Her receipt of the Rakow Commission acknowledges an artist who is creating critically-engaged, highly-refined glass works that expand our understanding of the material.”

Sutherland’s commission will be unveiled during the November 9 “Behind the Glass” lecture at the Museum, where she will be the guest speaker.

Inaugurated in 1986, the Rakow Commission is awarded annually to artists whose work is not yet represented in the Museum’s collection. The commission supports new works of art in glass by encouraging emerging or established artists to venture into new areas that they might otherwise be unable to explore because of financial limitations. It is made possible through the generosity of the late Dr. and Mrs. Leonard S. Rakow, Fellows, friends, and benefactors of the Museum. Each commissioned work is added to the Museum’s permanent collection and is displayed publicly.