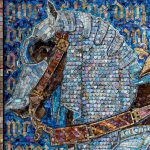 Guest blogger Natalie Z. Peters is an independent art historian and a contributor to the exhibition publication, Tiffany’s Glass Mosaics.

For more than 40 years, Louis C. Tiffany’s studios designed and produced many of the America’s most significant ecclesiastical mosaics. Ranging from geometric patterning to complex figural designs, mosaics were among the costliest and labor-intensive products crafted at the studios. While most examples remain in their original location, those on view in the exhibition Tiffany’s Glass Mosaics can tell us a great deal about the mosaics produced by the studios. 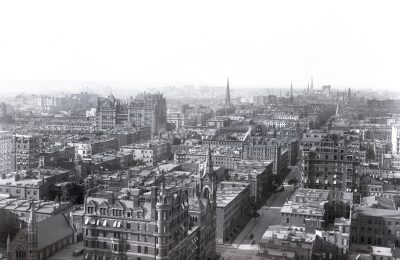 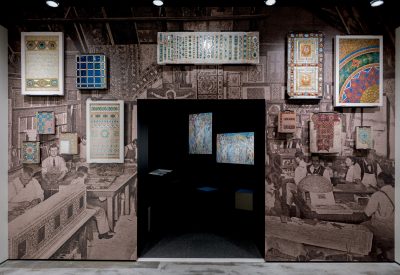 Tiffany’s workshop with sample panels as seen in the exhibition Tiffany’s Glass Mosaics.

The success of Tiffany’s mosaics coincided with an unprecedented church building boom and a religious fervor that quickly changed the American landscape in the late 19th century. One after another, new churches were built to accommodate growing congregations; by 1888, more than 4,000 churches were under construction nationwide. New churches were monumental in scale and ornately decorated, requiring finely-crafted religious objects and décor. To supply the demand, Tiffany’s ecclesiastical department provided all types of church decoration. The department was incredibly successful and religious congregations were among its best patrons.

Glass mosaic was a key element in the company’s ecclesiastical designs and used on a range of products: from mosaic-encrusted candlesticks and baptismal fonts to large-scale figural mosaics. The firm advertised the “decorative possibilities” of mosaics as “practically indestructible [and] limitless in color and texture,” and pioneered its use in America ecclesiastical spaces.[2] Two ecclesiastical commissions in New York State retain the interior decoration executed by Tiffany’s studios: St. Paul’s Episcopal Church in Troy and First Presbyterian Church in Bath. Mosaic is a unifying element throughout both interiors, shimmering in wall decorations, furniture inlays, and lighting fixtures. Their luminous quality creates a jewel-box effect that is just as beautiful today as when it was installed more than a hundred years ago. 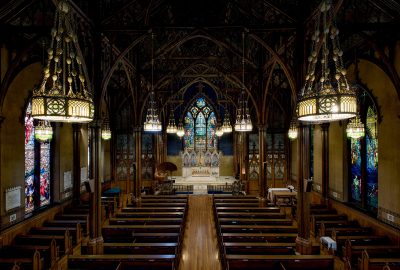 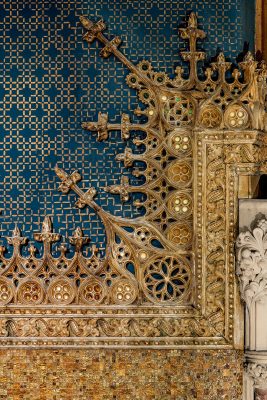 Memorials were also very popular with church patrons. Clients could choose from a “stock” or a custom design, depending on their budget. The Prayer of the Christian Soldier is a particularly beautiful example of such a memorial. Commissioned by First Presbyterian Church, Binghamton, N.Y., the memorial honors five soldiers who were lost in World War I. Surviving sketches offer an insight into the design process. The elegant sketch in watercolor, ink, and gouache, depicts a knight in armor on horseback. The Lord’s Prayer is visible in the background in a Gothic script. The detail and subtle shading achieved in finished mosaic is truly extraordinary. Tiffany’s signature iridescent glass adds to the visual power and majesty of the work. We can imagine that this image brought a sense of comfort and hope to the church members and to their community after such a loss. 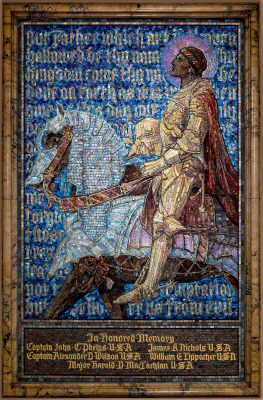 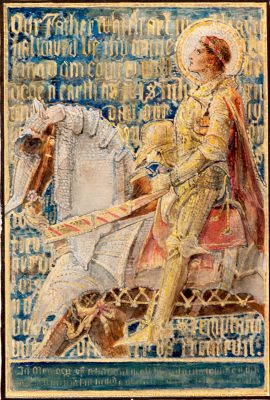 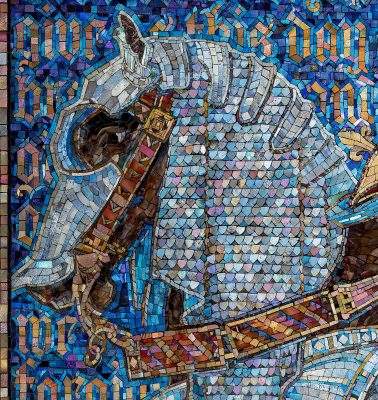 The exhibition is a rare opportunity to experience the innovation and intricacy of Tiffany’s ecclesiastical mosaics up close. Tiffany once said, “In all religious denominations, the desire for beauty is everywhere.”[2] This sentiment has proven timeless and is just as true today. Now, more than a century later, the beauty of these mosaic art works continues to inspire a sense of awe and grandeur; these sacred spaces still lift up the spirit.