This post comes from Colette Peavy and Pascual Ruiz Segura, Rakow Research Library interns working on the conservation of the Whitefriars stained glass cartoon collection over the summer of 2017, in conjunction with West Lake Conservators. Read more about this project and the collection in previous posts.

In our last blog post, we talked briefly about finding objects related to Liverpool Cathedral. We hoped to open some rolls that the Library had in its collection. Since our last post, we’ve had time to open three rolls from Liverpool. We’re working on conserving one of these rolls containing 52 works from the Cathedral’s Lady Chapel.

The Liverpool Cathedral took a total of 74 years to build. The foundation stone was laid in 1904, and the Lady Chapel was completed in 1910. The roll we are working on contains designs from several windows located on the west end of the chapel. These windows are known as the “Noble Women” windows. The style of these windows differs from the rest of the chapel; they depict 21 women of note and honor their contributions to society. The women include locally and internationally-known women such as Kitty Wilkinson, Agnes Jones, Grace Darling, Elizabeth Fry and Elizabeth Barrett Browning.

On the 5th and 6th of September 1940, the Cathedral suffered damage due to bombings during the Liverpool Blitz. The Lady Chapel was heavily damaged, and all of the windows, originally designed by J.W. Brown, were destroyed. Designer James Hogan began work on the reconstruction of the windows. After Hogan’s death in 1948, Carl Edwards continued the work, until it was completed in 1951.

These windows were reconstructed and reinstalled by Whitefriars. The reconstruction was done using photographs of the original windows for reference. We’re currently treating the items that are most likely these reference photos. The photos are not only of the original windows, but also of the original cartoons, including a portrait of Anna Hinderer. Also included in this roll were five full-scale traceries done on on wax canvas, and 22 sketches of women, animals, and flowers done on tracing paper. These sketches are interesting because we have not found original sketches like these before in the collection. 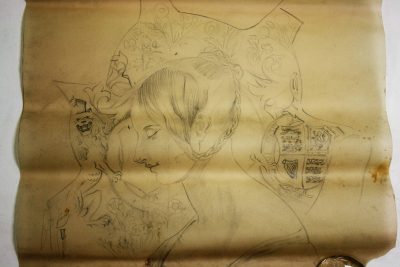 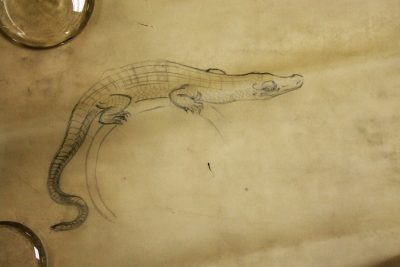 Sketch of a lizard

One of the purposes of the Whitefriars project is to conserve and digitize the collection, and the treatments performed on this roll are focused on the stabilization of the materials. Some of these treatments include dry cleaning, humidification (in order to relax the object), flattening, and finally mending using Japanese paper and wheat starch paste. The stabilization and digitization of these particular works gives us more information about the original windows and the process of their re-creation. The discovery of works like these illustrate how exciting this project is, and the stories waiting to be uncovered. 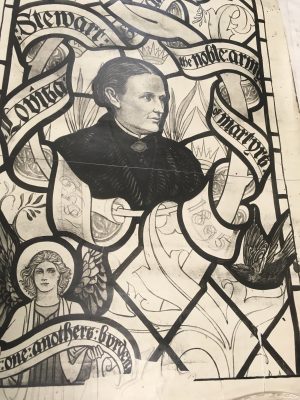 A silver gelatin photograph of one of the original cartoons featuring Louisa Stewart. The photo has been drawn on using graphite, in order to fill-in/modify missing details. 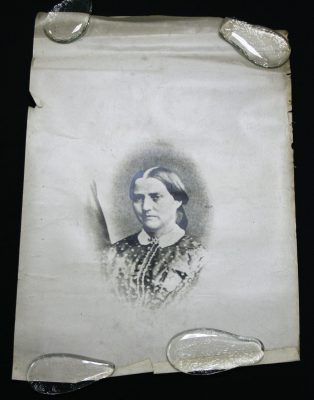 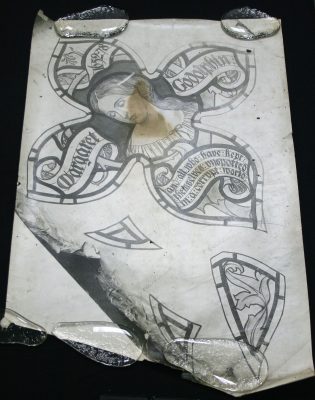 A silver gelatin photograph of one of the original cartoons featuring Margaret Godolphin. You can see damage done to the edge of the cartoon in the photograph.

Below are three stained glass designs for a Margaret Beaufort window: