In the 1840s, Finn demonstrated at the United
States Hotel in Augusta, Georgia. CMGL 164968

Lawrence Finn never stayed in one place for too long. Like many in his profession, he was always on the move, traveling across the country to find new audiences. Finn was a 19th-century itinerant glassworker — a flameworker who traveled from town to town, demonstrating glassmaking and selling glass trinkets. We don’t know much about his life, but let’s take the few clues we have and see if we can find Mr. Finn.

Where in the world is Mr. Finn?
Tracking the path of someone who lived almost 200 years ago can be a bit tricky. Today some people leave a minute-by-minute trail of their lives, but a traveling demonstrator like Lawrence Finn left few lasting records in his wake. Luckily, the job that kept Finn on the road also gives us an advantage when looking for him. When he set up shop in a new location he needed to attract customers, and Finn did that by advertising in the local newspapers and distributing handbills and broadsides in the area. Sometimes the local newspaper would review his show. This paper trail gives us a fairly accurate idea of his travels.

Trail of evidence
To find Mr. Finn, let’s first examine the advertisements attributed to him in the Rakow Research Library. Dated between 1815 and 1843, these ads place him in London, New York City, Boston, and Augusta, Georgia. Additional newspaper advertisements identify Washington, D.C., and Philadelphia as two other places Finn demonstrated. Later itinerant glassworkers would often visit smaller cities and towns, but it seems like Finn’s strategy was to stay in large cities near tourist destinations. His New York address, 202 Broadway, was located across the street from St. Paul’s Chapel and down the street from New York City Hall,  Peale’s Museum, and Scudder’s American Museum (later P.T. Barnum’s American Museum). In Boston, he was situated near the Old South Meeting House, the Old State House, King’s Chapel, and right across the street from Benjamin Franklin’s birthplace. 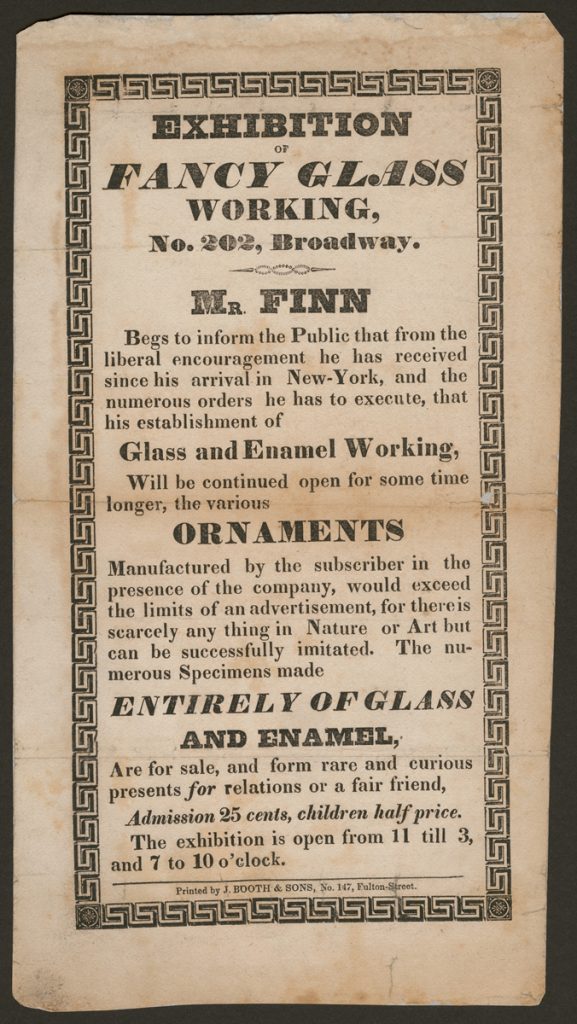 An advertisement for Mr. Finn’s exhibition at 202 Broadway in New York City. CMGL 163865 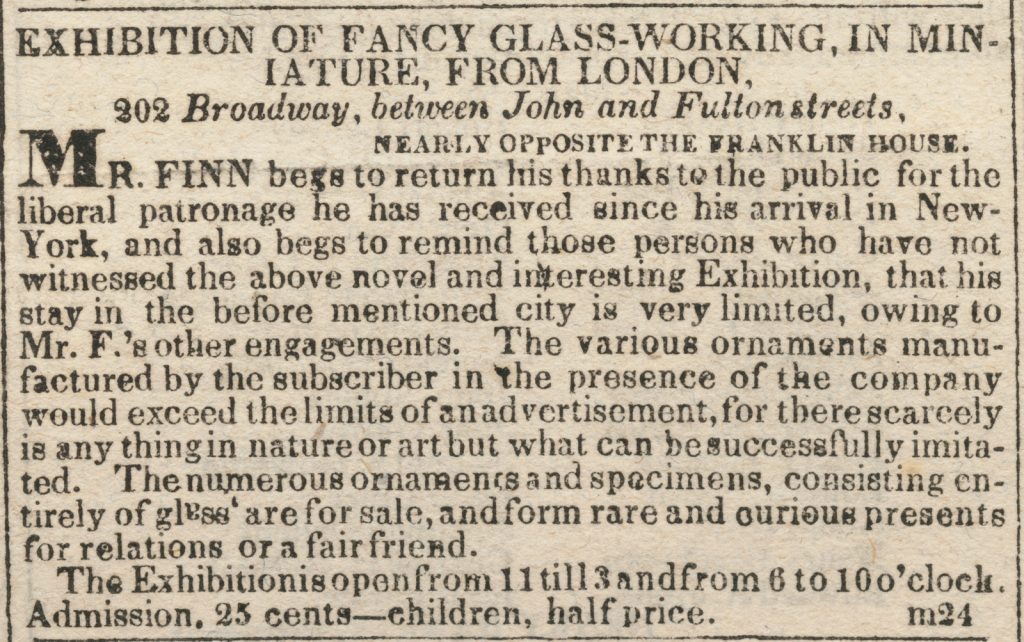 Finn spent the most time demonstrating in New York City, and stayed at 202 Broadway more than once. CMGL 165045

Finn rented space near popular destinations for tourists, like the Old South Church in Boston.

Now that we know several places where Finn stayed, the next step is to search a few of the databases available through the Rakow Library, including Ancestry.com, Newspapers.com, and New York State Historic Newspapers.

Based on his advertisements, we know Finn was British, and through Ancestry.com we can connect him to another, older Lawrence Finn, likely his father or uncle. This older Finn performed in London before and during the time our Mr. Finn traveled around the United States. Another Finn demonstrated in London before and during Lawrence’s travels in the United States, likely his father or uncle. CMGL 112199

Based on passenger logs and newspaper advertisements, we know the younger Finn likely arrived in New York City from London in October 1827 and rented rooms at 202 Broadway. He opened his exhibition on Monday, November 12, 1827. At the time, he was perhaps only the second itinerant glassworker to travel and perform in the United States.*

This is the first advertisement Finn placed in the newspaper upon arriving in New York City. Find similar advertisements and articles in the New York Historic Newspapers database, available online.

At the beginning of 1829, Finn closed his exhibition at 202 Broadway and spent the next few months demonstrating first in Washington, D.C., and then in Philadelphia. In D.C., he was located near the National Mall on Pennsylvania Avenue — where the FBI and Department of Justice buildings are today. He extended his stay in D.C. due to bad weather, but eventually traveled to Philadelphia, where he set up his show in the Masonic Hall.

After a few years, Finn moved to Boston and opened his exhibition to a new audience. But he didn’t stay there for too long. By the beginning of 1832, Finn was demonstrating flameworking at 115 Chartres Street in New Orleans, above a jewelry store. Once again it seems he chose his location carefully, settling in the French Quarter. 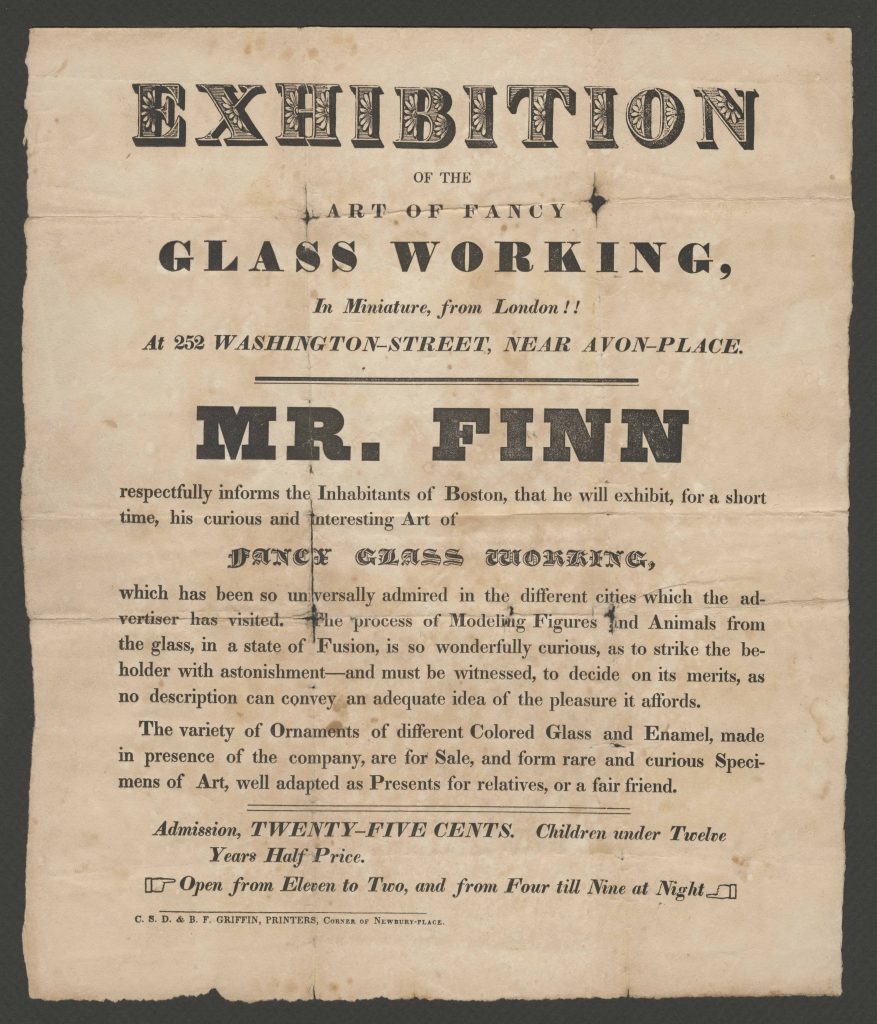 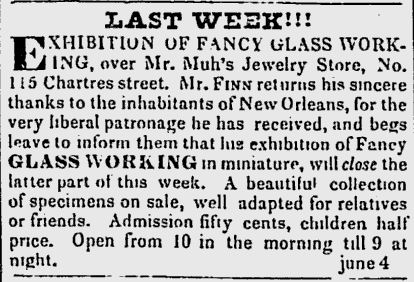 Finn demonstrated in four New Orleans locations, including this room over a jewelry store.

Over the next decade, Finn revisited many of these cities. He traveled back to New York and Washington, D.C., then Boston, and finally New Orleans. He may have stopped in other cities in between, like Augusta, but sometimes he disappears for a year or two. Even with all the information we have, Finn’s life and location is still a mystery at times. 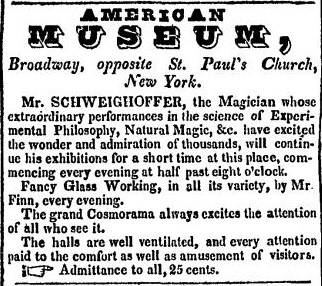 Mr. Finn also worked for P.T. Barnum at his museum in New York City. This ad is from 1835. 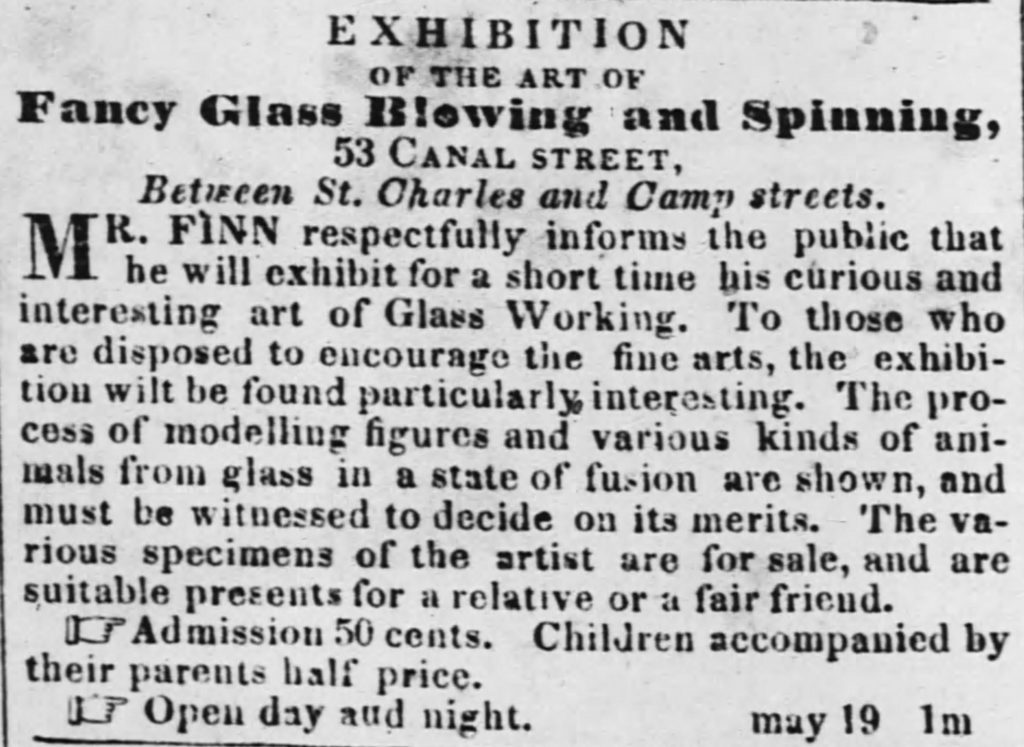 Newspaper advertisements like this one from The Times Picayune can be found in databases like Newspapers.com, available at the Rakow Library.

*John Tilley is the earliest known glassworker to demonstrate in the U.S.

Visitors can learn more about itinerant glassworkers, as well as view handbills and broadsides in our 2017 exhibition, Curious & Curiouser: Surprising Finds from the Rakow Library.

Read about other traveling glassworkers in our collection.

**This post was updated with new information on September 11, 2017.