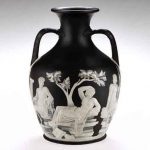 The Mona Lisa, Leonardo DaVinci’s iconic painting in the Louvre, might be the most famous work of art in the world right now. It has inspired memes, selfies, movies, and not an insignificant number of inquiries into the subject’s enigmatic ‘smile’. A 2,000-year-old Roman glass vase inspired similar wonderment and emulation in the 1700s and 1800s. That famous glass vase became known as the Portland Vase.

The modern history of the vase began in the 1600s, when it was owned by a series of wealthy Italian families. It eventually landed in the hands of the powerful Barberini family, who owned it for over 150 years. Sometime before 1778, Princess Cordelia Barberini-Colonna had a bad run at cards and lost the vase to a Scottish art dealer. In 1784, the vase was sold to Margaret Cavendish Bentinck, the dowager duchess of Portland, after whom the vase takes its modern name. William Bentinck, the 4th Duke of Portland, lent the vase to the British Museum in London in 1810, and the institution purchased the vase from the heirs in 1945. The vase caused a sensation among the glitterati of Georgian and Victorian England, who were entranced by its mysterious origins, manufacturing technique, and iconography.

The Corning Museum of Glass and Rakow Research Library contain dozens of objects, drawings, and print materials inspired by the Portland Vase. Some of these materials are featured in Curious and Curiouser: Surprising Finds from the Rakow Library, on display at the Library until February 2019. 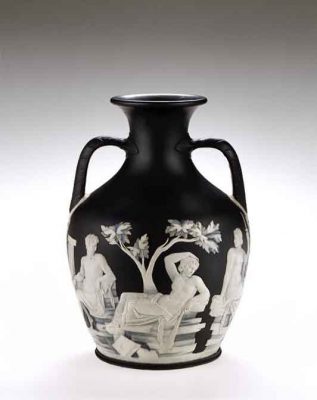 Copy of the Portland Vase, Josiah Wedgwood, Etruria, England, about 1790, 92.7.2, purchased with donated funds from the Clara S. Peck Endowment 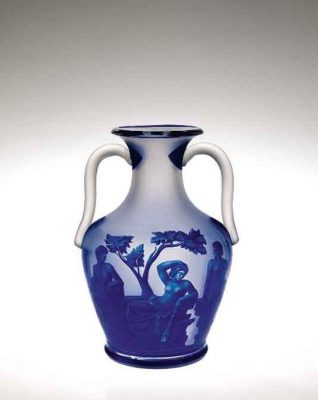 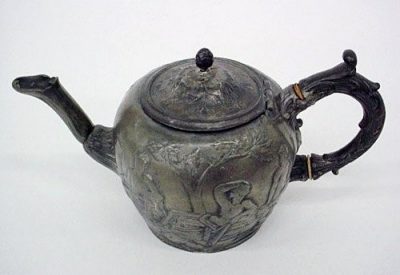 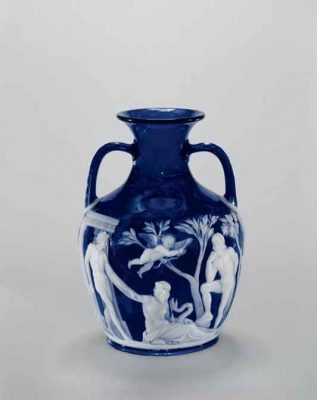 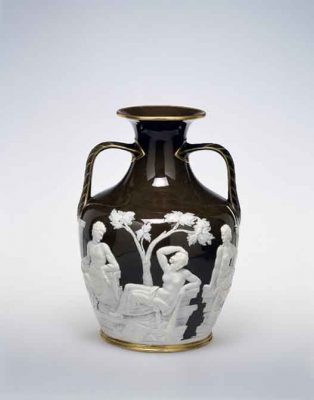 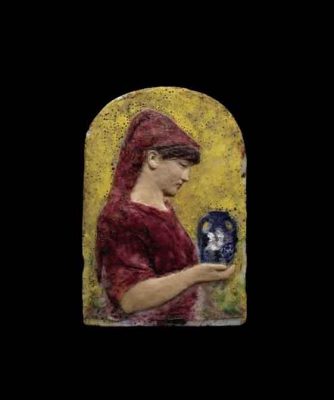 Josiah Wedgwood, a highly-accomplished ceramicist and businessman, was so inspired by the Portland Vase that he set out to recreate it using his preferred medium of jasperware. It took Wedgwood and his team four years to successfully imitate the Portland Vase in ceramic. When they finally did in 1790, they hosted gala events to show off the accomplishment by selling tickets and hosting Queen Charlotte of Great Britain. Wedgwood’s son, Josiah II, toured the vase around Europe to sell additional copies. Many of these “first editions,” made with a grey-black body and white figures, survive in museums today including one at The Corning Museum of Glass. The Wedgwood firm continued to produce versions for decades afterward. Wedgwood was so closely associated with the Portland Vase that his commemorative statue in Stoke-on-Trent, erected in 1863, shows him holding the vase.

Wedgwood’s obsession, in turn, may have inspired his close friend and family doctor Erasmus Darwin. We know from correspondence between the two that Wedgwood sent his first successful ceramic copy to Darwin in September 1789, requesting that Darwin not show it to anyone else (a request Darwin admitted to not following). Darwin was, at the time, engrossed in his own magnum opus, a lengthy poem describing principles of botany and other scientific concepts using eroticized language. But he couldn’t resist a small digression to refer to his friend and their mutual passion for the Portland Vase:

And pleased on Wedgwood ray your partial smile.
A new Etruria decks Britannia isle …
Charm’d by your touch, the kneaded clay refines,
The biscuit hardens, the enamel shines;
Each nicer mould a softer feature drinks,
The bold Cameo speaks, the soft Intaglio thinks. The Botanic Garden: a poem, in two parts also includes several pages of prose about the Portland Vase and Darwin’s interpretation of its iconography, accompanied by engraved illustrations of the vase by William Blake.

We can imagine Darwin and Wedgwood sitting down over a glass of port to discuss how the Portland Vase was made and what the scenes meant. Erasmus’ son Robert and Josiah’s daughter Susannah eventually married. In 1809 they welcomed a son, Charles Darwin, whose fame eventually surpassed that of his grandfathers. Charles Darwin’s sea voyage on the ship Beagle, where he observed Pacific island finches, helped lead to the theory of evolution through natural selection. Perhaps the Portland Vase, with its symbols of birth and fertility, is just a little bit responsible for bringing Wedgwood and Darwin and their families together and giving rise to modern science.

See the first successful glass replica of the Portland Vase, made almost 100 years after Wedgwood’s ceramic version, in the 35 Centuries of Glass gallery, then head over to the Library to view the ceramic vase and Darwin’s Botanic Garden poem in Curious and Curiouser.

Curious and Curiouser: Surprising Finds from the Rakow Library is on view at Rakow Research Library at The Corning Museum of Glass April 8, 2017, through February 17, 2019. Learn more about the exhibition.