By now, you may be familiar with the existence of the Thatcher Glass Manufacturing Co., which was located in Elmira, N.Y., for the better part of the 20th century. The bottles that Thatcher produced revolutionized the way milk was delivered to consumers. Wait, you don’t know about Thatcher? Hold on to your glass of milk, you are about to get a history lesson! A druggist named Dr. Hervey D. Thatcher in Potsdam, N.Y., created the milk bottle as we know it. In the 1870s, he noticed a problem with the milk delivery system. Dairy wagons would go from house to house and deliver milk by way of a large metal container. The delivery man, or milkman, would use a dipper to ladle milk from this container and transfer it to a pitcher or other container at each home. Many times, by the end of the route, the milk would be contaminated with an assortment of debris. To solve this problem, Dr. Thatcher developed a milk pail preventing contamination during the milking process. This invention was called the “Milk Protector” and it was a covered pail with two funnels that would slide directly onto the teats of the cow being milked. It prevented hair, dirt, and insects from contaminating the milk. This “Milk Protector” was patented in 1883.

H.D. Thatcher & Co., 1883-1894
In 1885, Dr. Thatcher invented a milk bottle (also called the “Milk Protector”) to provide a sanitary delivery to consumers’ residences. Dr. Thatcher created the mold for the bottle by hand-turning a piece of wood on a lathe. “Thatcher Milk Protector” was embossed on the sides of the bottles. Later that year, Dr. Thatcher patented a wooden stopper for the bottle; the prototype for the stopper was also turned on his home lathe. Because of his innovative inventions, Dr. Thatcher became known as the “Father of the Milk Bottle.” 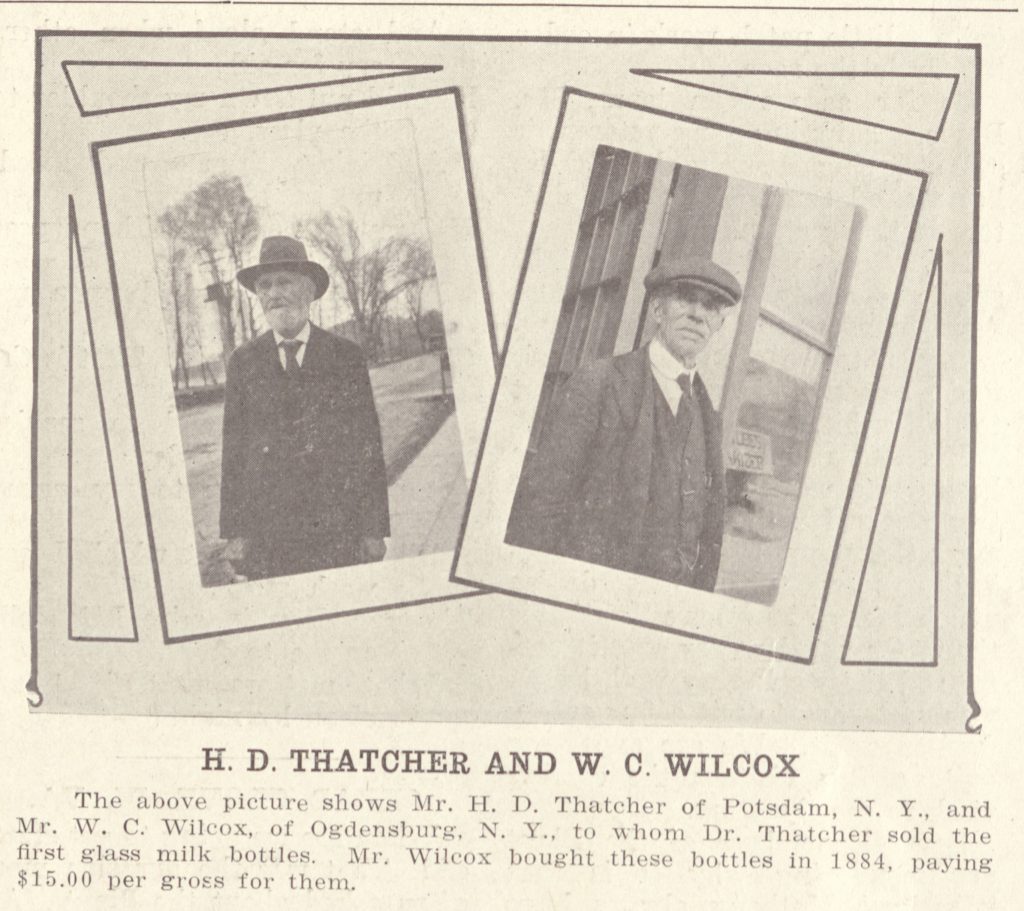 Later on, he partnered with a man named Harvey P. Barnhart to make a bottle that improved on the Milk Protector design. This next bottle was called the “Common Sense Milk Bottle,” and used a cap held in place with a wire fastener. Dr. Thatcher patented this design in 1886, and used the wire fastener caps on all his future Milk Protector designs. Harvey Barnhart and his brother, Samuel, eventually went on to patent a cap that was used on Dr. Thatcher’s Common Sense Milk Bottles. Thatcher and the Barnhart brothers continued to promote and distribute their new inventions successfully for the next few decades until facing a decline in the early 1900s.

Thatcher Mfg. Co., 1889-1946
Around the turn of the century, an Elmira lawyer named Francis E. Baldwin and a group of investors purchased Dr. Thatcher’s bottle business. Baldwin took direct control of the corporation’s daily activities in 1902 and the struggling business once again started to flourish under his leadership. In 1904, under the directive of Baldwin, the company purchased an Owens automatic bottle machine, which Baldwin had seen in action in an Ohio glass factory. At that time, Thatcher Glass had three plants located in Kane, Pa.; Ottawa, Ill. (later located in Streator, Ill); and Elmira, N.Y. The Owens machines were so successful that Thatcher Glass expanded in 1920 by purchasing four rival companies and their factories in Mt. Vernon, Ohio; Winchester, Ind.; Dunkirk and Lockport, N.Y;  and Parkersburg, Cedar Grove, and Clarksburg, W. Va. 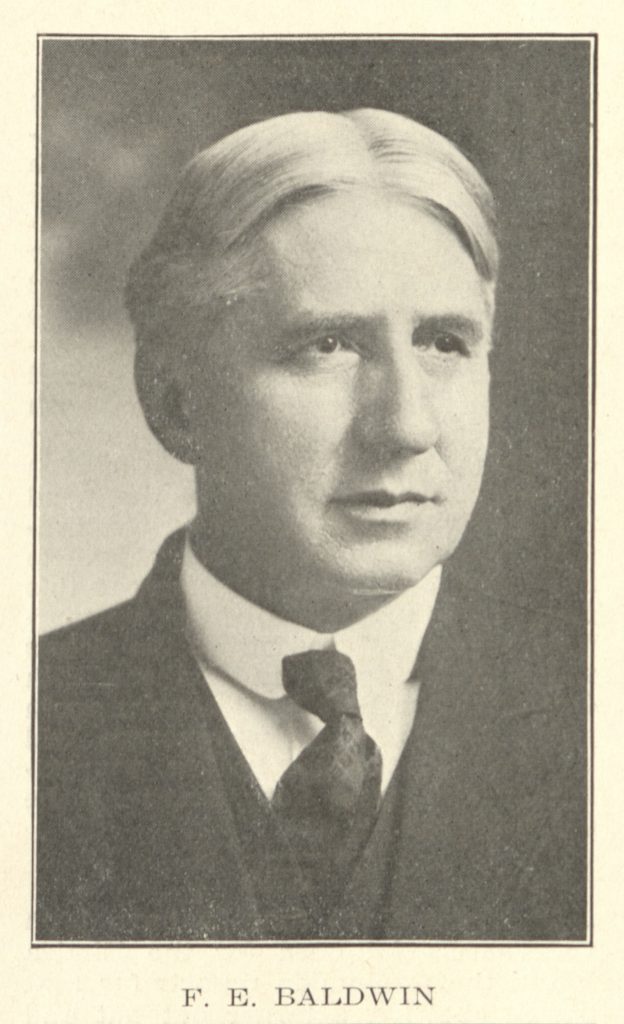 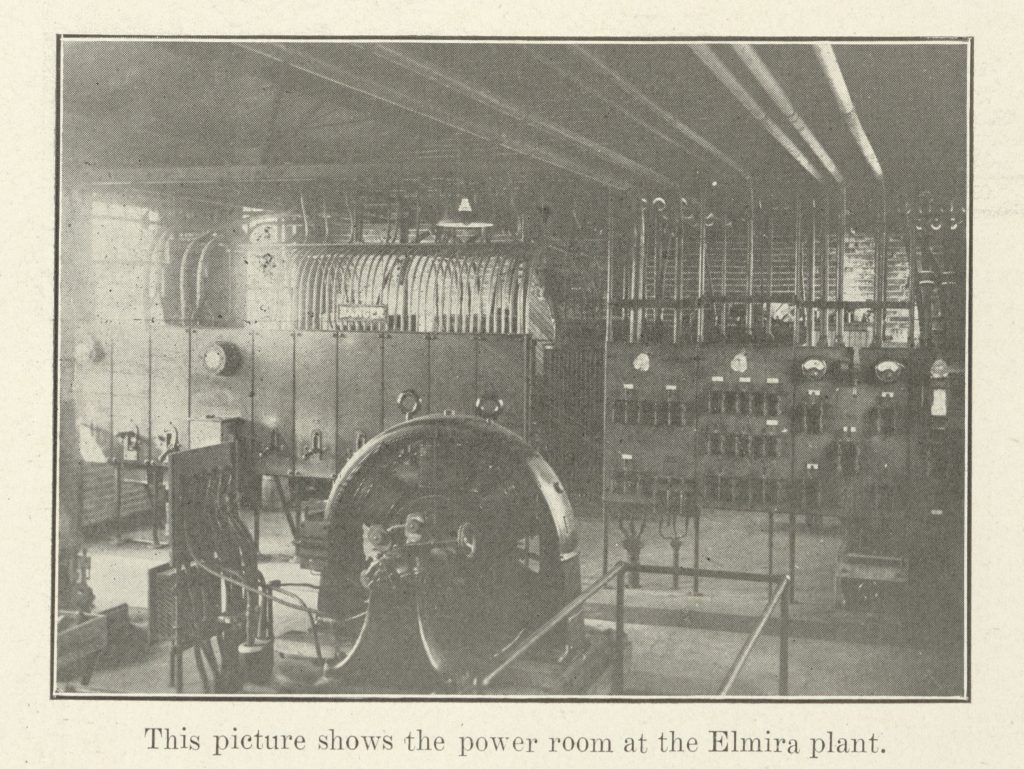 Thatcher Glass Mfg. Co., 1946-1966, and Thatcher Glass Corp., 1981-1985
Some of the Thatcher Glass plants would continue to operate for several years, with a few of the locations closing due to higher production costs. Between 1923 and 1926, the factories at Kane, Mt. Vernon, Clarksburg, and Winchester closed. In 1966, the business was acquired by Rexall Drug & Chemical Co. (later Dart Industries) and Thatcher became a division of that company. In 1981, the division was sold to Dominick & Dominick, where it operated under the Thatcher Glass Corp. name. In 1985, Thatcher declared bankruptcy and Diamond-Bathurst, Inc. acquired its remaining assets.