In the Rakow Research Library’s collection is a small catalog titled, For the Bride: Modern American Glassware (1945), which includes targeted advertisement of the Modern American glassware for the American bride. This series would become the last handmade glass produced by the Libbey Glass Company of Toledo, Ohio.

In 1939, Libbey designed a new line of stemware called “Modern American” with the help of Edwin W. Fuerst, former student at the Toledo Museum of Art’s school and former head of the Package Department at Owens-Illinois. A pre-introductory Modern American Glassware catalog was printed in 1939 when the line was first designed, however the series was not introduced until 1940 at the Crystal Room of New York’s Gotham Hotel. Shortly after its formal introduction, approximately 300 leading stores featured the line with great success.

The first page of the catalog features a photograph of a Libbey gaffer forming a bowl with the caption:

“Modern American Glassware will be cherished by every bride, as long and as dearly as her memories. It is fine glassware … superbly fine … and every piece is handmade by masters of their craft. Each design is a work of art, with beauty that never grows old. You could not choose a more royal possession […]”

If the language itself wasn’t enough to persuade a bride to purchase Libbey glass, the catalog even came complete with a list of stores east of the Rockies where one could find Libbey Glass.

The “Monticello, 5700” design was part of this Modern American line. The name and design were inspired by the neoclassical architecture of Monticello, Thomas Jefferson’s home in Charlottesville, Virginia. Monticello was featured in For the Bride, Modern American Glassware: “The master designer Thomas Jefferson would have liked this stately pattern, as American in feeling as Monticello’s columns. Gracefully flaring bowl helps make the pattern a great favorite.” 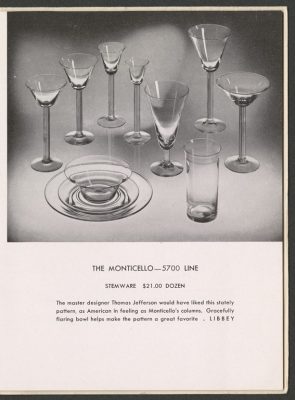 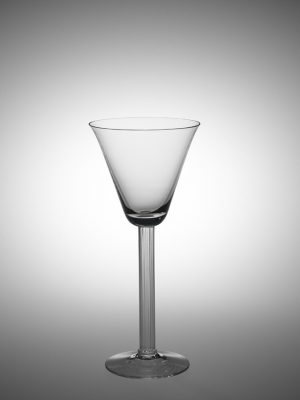 Unfortunately, a little more than a year later, World War II manufacturing restrictions delayed production of the series. Deemed an essential industry for the war effort, Libbey’s craftsmen turned their skills to making radar, X-rays, electronic tubes, and “heat-treated” tumblers. In anticipation of the war’s end, and in hopes of retaining customers, Libbey continued to advertise the Modern American line through special explanatory inserts in their tableware catalogs. Such an announcement is included in For the Bride, Modern American Glassware. It reads: “With Apologies to the Bride,

Because skilled Libbey craftsmen are devoting their every working hour to the making of glass articles for war, it is possible that your dealer may not be able to supply you with Libbey crystal.

However, we are sending you your Bride’s Booklet in order that you may select your stemware pattern. If you are able to purchase a few goblets in the pattern of your choice, we assure you that when the Victory is won, your dealer will have the matching pieces you desire.”

With the end of World War II, Libbey’s management decided against reinstating the line of fine handmade crystal. As the Libbey name became synonymous with the tableware for the American home, Libbey focused its effort on mass-produced tableware. The new focus, coupled with ample advertising, enabled the company to continue growing.

See more glassware in the Collection by Libbey Glass Company.