Sitting on the fourth shelf, third row in on the right, of the Jerome & Lucille Strauss Study Gallery at The Corning Museum of Glass (CMoG), sits a little blue bowl. At only 8 centimeters high (3.25 inches) and 12 centimeters (4.75 inches) in diameter, it is almost lost amongst the thousands of other items you can find in that gallery alone. Positioned toward the back, although not hidden, it resides with other vessels and stemware of a similar age and style, either in blue or green or lilac. The shelf is labelled British Glass, 19th Century. 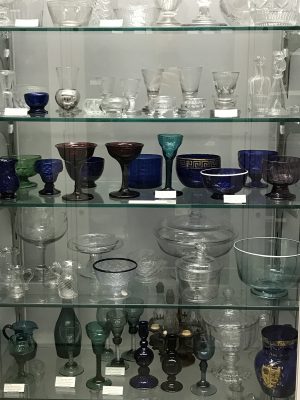 Deep blue gilded bowl on the third shelf down, fourth object from the right. 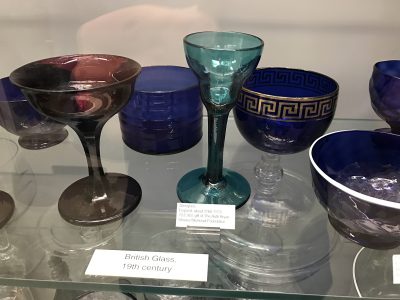 There is seemingly nothing extraordinary about this singular blue bowl. It has a gilded pattern that runs around its rim, a key-fret frieze that resembles a chain of waves cresting one after another. It’s a simple and attractive decoration that was both common and popular for the time.

But I’m drawn to this particular piece for a reason: this little bowl and I have something in common.

Described as a Deep Blue Gilded Bowl, or more simply 58.2.1 in our records management system, this bowl is an example of hand-blown blue glass from the English city of Bristol; the very same city I was born in, almost 200 years after it was made. With a long and interesting history, replete with innovation and controversy in equal measure, Bristol plays a significant part in a story that saw the rise and fall, and subsequent rise again, of the English glass trade. 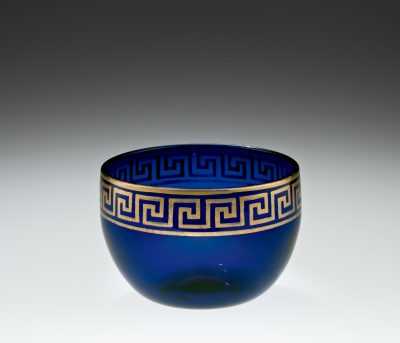 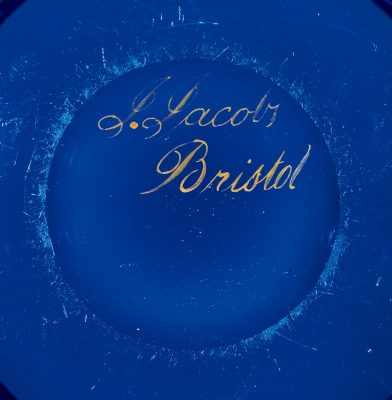 During the 18th century, at a time of industrial prosperity, Bristolian glass houses sprang up across the city at such a rate they soon rivaled churches in number. Their primary output was blue medicine bottles. It wasn’t long however, before blue glass was adopted for items of greater finery and distinction. Long associated with wealth by merchants and traders frequenting the ports of Southern England, the color blue exemplified luxury and status, and soon became a staple in the home.

Blue glass is naturally derived from cobalt oxide, and when combined with lead crystal creates a rich, dark blue. This combination would go on to be known as Bristol Blue. At the time, the highest quality cobalt was sourced and imported from Saxony, Germany, where William Cookworthy, an early pioneer with porcelain, held the sole import rights, supplying all the glassblowers of Bristol.

One such glassblower was Isaac Jacobs, the son of a Jewish immigrant from Frankfurt. At the age of 17, Isaac had joined his father’s glass company on Temple St. in the heart of Bristol’s Jewish quarter, and began to learn the family trade. He would later go on to establish his own company: The Non-Such Flint Glass Manufactory. Years later, it was Isaac whose name would become synonymous with Bristol Blue.

After the death of his father, Isaac’s business and reputation grew. The gentile society of Bristol welcomed the skill and craftsmanship of the Jewish German immigrants, and Isaac found himself adopting the traits of his new-found community. Around 1810, Isaac was honored as a freemason of the city; he moved to a larger house, was granted his own coat of arms, and made a substantial salary. At the height of his success he could boast of providing wares to His Majesty George III and the wealthiest aristocrats of his generation.

However, his success was short-lived. The Napoleonic wars spread across Europe, cutting off the supply of cobalt oxide. Meanwhile, a decline in demand at home left Isaac’s glassworks reeling. His debts went unpaid, and he was forced to declare himself bankrupt. He returned to the ways of an itinerant peddler. In 1835 he died, penniless. Fast forward 200 years and I find myself peering into our display case, curious about this little piece of history before me.

Identified as a finger bowl by CMoG’s new curator of European glass, Kit Maxwell, it more than likely was part of a much larger dinnerware set, including wine glass coolers and decanters. The finger bowl’s only purpose was to clean ones fingertips, before savoring some buttery stalks of asparagus perhaps, and it was described by one German visitor to England in 1786 to be “quite delightful.”

Purchased in 1958, the bowl has been in the Museum’s collection for almost 60 years, 56 years longer than I’ve been here. In that time, Bristol has seen a strong resurgence in glass and the Bristol Blue color that once made it famous. Looking over the inscription on the base of the bowl that reads “I. Jacobs Bristol” I feel a connection to Bristol, my hometown, and its rich history.

Bristol Blue has been a presence in my life for as long as I can remember. But only now, half way around the world, am I putting together all the pieces of this puzzle. For some years I found myself working next door to a small glass studio proudly continuing the legacy of Bristol Blue, just a stone’s throw from Temple St. where Isaac Jacobs made his fortune. In my hometown, a piece of Bristol Blue rests upon the top shelf of every antique shop, much like old Steuben glass found in the shops of Corning; becoming dusty, just waiting to be found by a loving collector.

I have a new found appreciation for this remarkable piece of history, and if I ever need a reminder of home, I’ll just look for that little blue bowl.