We are making Cartesian divers at our Spring Break MakerSpace next week. Come join us and make your own!

What is a Cartesian diver?

A Cartesian diver is an object used to demonstrate the relationship between density and buoyancy. Density describes how much matter is in a certain volume. Imagine filling two measuring cups, one with vegetable oil and the other with water. Now imagine placing those cups on a kitchen scale. You would find that one cup of vegetable oil has a mass of 223 grams and one cup of water has a mass of 240 grams. Vegetable oil has less matter in one cup than water, so vegetable oil is less dense than water. Buoyancy is the ability of an object to float in water. If you poured the vegetable oil and water into the same container, the vegetable oil would be buoyant and float on the water. Cartesian divers are interesting because their density and buoyancy can be changed at will, which means they can float or sink (hence Cartesian “diver”).

How does it work?

Today, you might make a Cartesian diver in science class, but for hundreds of years they were also made and used by itinerant glassworkers. These men and women were flameworkers who traveled around the world to demonstrate glassmaking to people. They made all sorts of models and contraptions to entertain their audiences, including Cartesian divers. Itinerant glassworkers were entertaining
audiences with Cartesian divers as early
as the late 1600s. (CMGL 112252)

One of the earliest records we have of these glassworkers is an advertisement for a demonstration in Poland from about 1670. On the right-hand side of the ad, you can see a man using a Cartesian diver with three figures, or “divers” inside. Based on the description below the image, the glassworkers didn’t necessarily explain the science behind why the divers moved. Instead, it almost sounds like they promoted the experiment as a magic trick. The advertisement says the glassworker could call each figure by name and command it to move up or down, and the figure would obey – in four different languages!

Cartesian divers remained a popular part of itinerant glassworkers’ shows, whether billed as scientific experiments or magic tricks. During the 1800s, many middle-class Americans wanted to be educated while they were entertained, and went to scientific demonstrations, lectures, and museum exhibits in droves. Glassworkers accordingly included a growing number of experiments and lectures in their shows, and Cartesian divers were often shown alongside pulse glass circulators, philosopher’s hammers, cryophorus deception glasses, and hydro-pneumatic fountains. 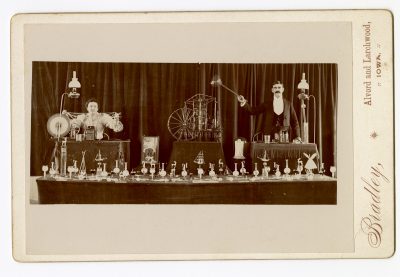 F.A. Owen and his wife show off all the different sculptures, experiments, and models audience members could see at their shows. Can you spot the Cartesian diver? It’s almost all the way to the left, and is topped by a small glass stag. (CMGL 131372) 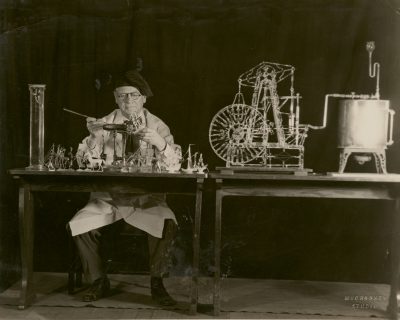 Itinerant glassworkers who performed in the 1900s used many of the same skills and attractions as their earlier counterparts. John Backman, shown here in the 1930s, makes a ship with a Cartesian diver to his right. (CMGL 152150)

Itinerant glassworkers continued to perform into the 1900s, but the advent of mass entertainment drew audiences away from itinerant performers of all types. Glassworkers looked for alternative options, like starting their own stationary tourist attractions or joining the circus as a side show. Cartesian divers remained popular elements of their demonstrations.

How to make your own Cartesian diver

You can make your very own Cartesian diver with things you probably already have around the house. Click here for step by step instructions, or visit our Spring Break MakerSpace (April 8 – 14 in the Education Lab) where you can create one.

This post was written by Rebecca Hopman and Kathryn Wieczorek. Read more about itinerant glassworkers.