Can you be haunted by a building? Glass scholar Paul Hollister (1918-2004) certainly thought so and later described his own haunting in a lecture. At age 11, he visited the Crystal Palace, site of the Great Exhibition of 1851, located in London’s Sydenham Hill, and was instantly transfixed by the giant cast-iron and plate-glass exhibition hall. This sparkling structure with its clear glass walls and ceilings ingrained itself into his imagination and helped instill a lifelong passion for the study of glass. Although Hollister would go on to become one of the foremost scholars in 17th- to 19th-century glass studies, glass paperweights, and contemporary studio art glass, the enchanting Crystal Palace never strayed far from his thoughts or his research. 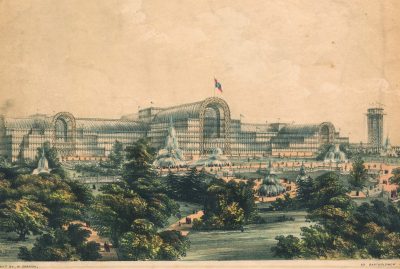 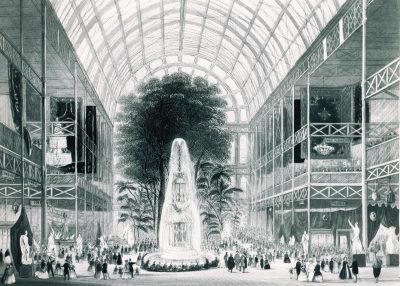 Illustration of the interior of the Crystal Palace, Paul M. Hollister Collection, CMGL 101610.

After graduating from Harvard College in 1941 with a Bachelor’s Degree in Fine Arts, Hollister became a journalist and painter. He worked mainly in oils, first exhibiting his art in 1947. Upon the death of his mother, he inherited 10 paperweights she had collected during her travels in Europe. These paperweights revived his interest in glass, first sparked by the Crystal Palace, and he decided to research their history and properties. Eventually, Hollister started collecting his own paperweights at antique shows and auctions until he had collected so much information on these objects his wife told him to write a book. So he did. Published in 1969, The Encyclopedia of Glass Paperweights was the first comprehensive examination of the history and production of paperweights and remains one of the best resources on the topic. Hollister proceeded to make a name for himself as a Renaissance man in the glass community by publishing half a dozen books and writing more than 150 articles on topics as varied as the depiction of glass in the paintings of Vermeer to Art Deco on French ocean liners. Additionally, he taught glass survey courses at the Cooper-Hewitt Master’s Program in Decorative Arts from 1984 until 1993 and was an adjunct associate professor at the Bard Graduate Center for Studies in the Decorative Arts from 1993 to 1994.

Beginning in 1993, Hollister donated portions of his glass research collection to the Rakow Research Library. After his death in 2004, his widow, Irene, continued to send the Library materials until her passing in 2016. As the project archivist for Hollister’s collection, I am in the midst of arranging, housing, and describing the 23 boxes of correspondence, lectures, interviews, and articles that comprise his archive. The end product will be a finding aid—or guide to the collection—that researchers can use to discover Hollister’s mosaic of glass history and knowledge.