Every year, it seems to become more difficult to find the perfect Christmas gift for my wife, Sheila. I am always on the lookout for something novel, something that she would never think of, something that will both surprise and delight her.

In 2016, that search was simplified considerably, thanks to the research of a German glass scholar, the kindness of a master Corning gaffer, and the recollection of some offhand musings of Sheila herself.

Sheila is the pastor of two small United Methodist churches in Odessa and Montour Falls, New York, about 25 miles north of Corning. On the first Sunday of every month, she celebrates Holy Communion with her nearly 100 parishioners. Until now, the Eucharistic vessels she has employed were silver sets owned by the churches or ceramic sets she has purchased over the years. On at least two occasions when we purchased ceramic vessels, Sheila wondered aloud if artists ever crafted chalices and patens made of glass. In October 2016, when I began to contemplate my Christmas conundrum, I suddenly remembered that, just one month earlier, the Museum had published, in its annual Journal of Glass Studies—for which I serve as associate editor—an article on glass chalices and ciboria (covered goblet-shaped vessels for holding the consecrated bread) written by Dr. Ingeborg Krueger, retired curator at the Rheinisches Landemuseum Bonn in Bonn, Germany. Dr. Krueger and I had worked together on several articles for the Journal over the years, and I was particularly interested in this contribution because of its church connection.

Dr. Krueger reported that, beginning in the late eighth century, the Roman Catholic Church stipulated that chalices and patens used in celebrating the Mass should be made of gold or silver. Poor churches were allowed to employ tin. A century later, glass was expressly forbidden for this use because of its fragility. There was a fear that the blood of Christ might be spilled if a glass vessel were to break. The ban on glass was occasionally disregarded, however, particularly in difficult times.

As Dr. Krueger noted, “There are indications that vasa sacra of glass existed in medieval and early modern times, and a number of simple glass chalices and ciboria dating from the late 17th century and later have been preserved.” She also stated that such vessels continue to be made: “Today, when a parish needs new altar vessels, it is not unusual for glass to be chosen as the material from which they are made, for the same reasons as in earlier centuries: glass is less expensive than precious metals, it is easy to clean and perfectly hygienic, and it can be very beautiful. The decision for glass is especially likely when there are glasshouses or renowned glass artists in the region.”*

Sheila and I had never seen any glass Communion vessels in the shops of glass artists or at craft fairs. I therefore turned for help to the resident adviser of The Studio of The Corning Museum of Glass, Bill Gudenrath. He informed me that I would not have to conduct an extensive search. He could make the vessels for me. “I was always under the impression that you couldn’t use glass vessels in the Communion,” Bill said. “I thought this was quite a missed opportunity for a glass artist. This project provided me with a great opportunity to set the record straight.”

I quickly decided that this project was too important to keep it a secret from Sheila. She would need to consult with Bill to determine the proper thickness and heft of the vessels (they would need to be much sturdier than the beautiful, intricate, and remarkably thin Venetian-inspired glasses he usually produces), the most appropriate color to showcase the wine (actually, in the United Methodist church, where even young children participate in the Eucharist, grape juice is used), the proper width of the mouth of the chalice for intinction (the dipping of the bread into the cup), and the preferred style of decoration. Sheila met twice with Bill to discuss these and other topics, and he fashioned several prototypes for her inspection before he was ready to make the final set of vessels.

“The biggest challenge was working glass as thickly as I did,” Bill explained. “I usually work glass very thinly. By gathering much more glass than I think I need and by not blowing so much, this leaves the glass a lot thicker.”

Bill continued to work on the project until December 22, when he surprised Sheila by offering her two chalices and two patens in the same design, because … glass breaks!

Sheila unveiled one set of these vessels at her first Communion services of 2017, on January 9. She had earlier photographed the objects and shared them on Facebook. The response she received, both from her parishioners and from her clergy colleagues, was enthusiastic. 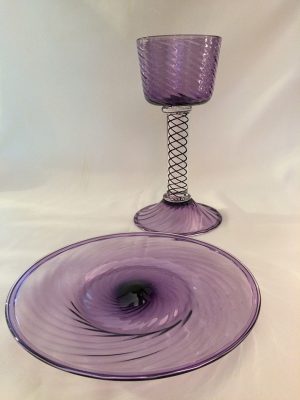 The completed chalice and paten that were given to Sheila. 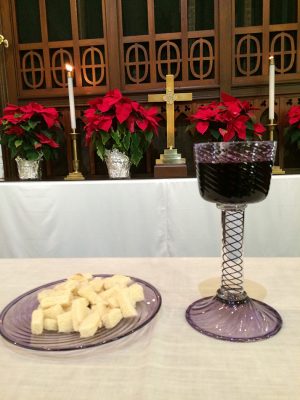 The chalice and paten being used at one of Sheila’s services.

“Our parishioners love the new Communion vessels,” Sheila said. “They are particularly impressed by the color of these objects, which is very different from that of the metal and ceramic vessels we have used in the past. The fact that the juice can be seen inside the chalice makes it even more attractive. Some of the members of our churches are familiar with Bill’s work, and we are all delighted that he was kind enough to make them for our use. My clergy colleagues, who have been admiring the vessels on Facebook, have written to say that they are truly stunning objects.”

The only downside to this very special gift is the thought that it will be next to impossible for me to come up with something comparable for Christmas 2017.