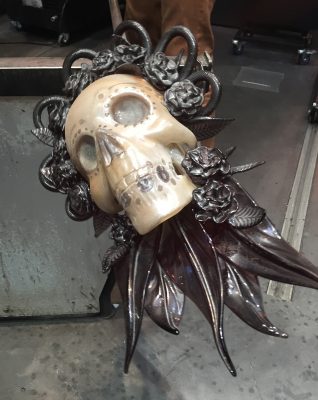 Study of the Día De Los Muertos, at Corning
Museum of Glass 2016. By Martin Janecky.

Martin Janecky began his career with glass at the age of 13 and later explored sculpting methods in the Czech Republic. Janecky teaches and demonstrates around the world, including at The Studio. In March 2016, he was an Artist-in-Residence, during which time he experimented with opaline glass made at The Studio to further his sculptural work. The following week he was a Guest Artist in the Amphitheater Hot Shop, and created a body of work inspired by the Mexican holiday Día de Los Muertos (the Day of the Dead).

Last fall, he traveled to Mexico City to experience the Day of the Dead and study Mexican folk art. In February and March of this year, Janecky returns to The Studio as an Artist-In-Residence to further explore this work, attempting to translate his fascination with the Mexican celebration into glass. The work will be exhibited in Mexico City on the Day of the Dead this fall. 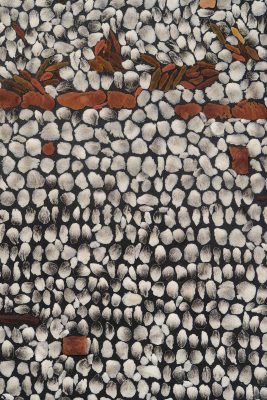 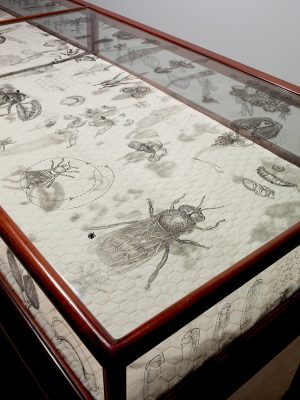 In January 2012, Judy Tuwaletstiwa began working with glass powders during an 18-month residency at Bullseye Glass Resource Center in Santa Fe, and discovered a material that synthesized and expanded the concepts she’d explored for almost 50 years as a visual artist and writer. Previously, she had worked with various media including paint, sand, feathers, sticks, and other natural materials with acrylic on canvas, but glass captivated her.

Michael Rogers has spent the past decade teaching in the glass program at the Rochester Institute of Technology’s School for American Crafts. For 11 years prior to that, he was the associate professor and head of the Glass Department at Aichi University of Education in Japan. Rogers was a co-chair of the 2016 Glass Art Society Conference in Corning.

In February and March, Tuwaletstiwa will work at The Studio with Michael Rogers for a collaborative residency, during which time, they will focus on the concept of bringing together the concrete and the ephemeral. Their joint residency will be able “experimentation based on years of being artists,” they said, “always asking, ‘What happens if …’ and then, seeing what happens.” 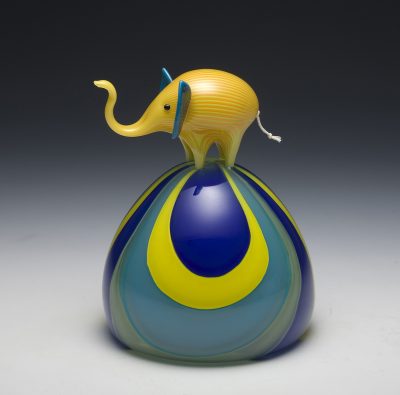 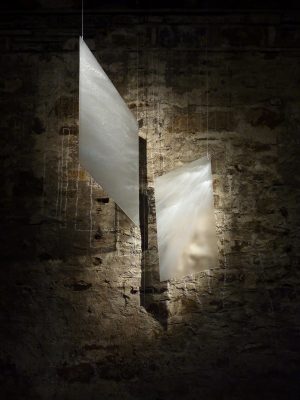 Claire Kelly’s work examines the human connection with animals and their larger relationship to our world and environment. Much of her recent work has focused around elephants due to their unique role as a “beloved childhood toy,” she says, and “a popular decorative figure with a strong history in glassmaking, and a perilously threatened species.”

During Kelly’s residency, she will experiment with glass produced by Effetre, an Italian manufacturer in Murano. She has learned about the glass from working with acclaimed glass artist Toots Zynsky. She plans to melt Effetre crystal glass and learn more about the colors, taking the opportunity to research the possibilities of this glass in the American market where it is not widely used for glassblowing.

Dr. Karlyn Sutherland is inspired by the bond between people and place. Autobiographical in nature, her work explores this dialogue through glass and architecture, with a particular focus on how characteristics and qualities of space are capable of shaping our experience, memories, and sense of attachment to our surroundings.

Sutherland will explore applications and installations of glass both within architecture and on an architectural scale during her residency. She will dedicate particular focus to the transmission, reflection, and refraction of natural light. From this work, she will begin to develop a body of large-scale works for installation.

Marina Hanser and Anna Riley
April 24-May 27; Public lecture on May 18 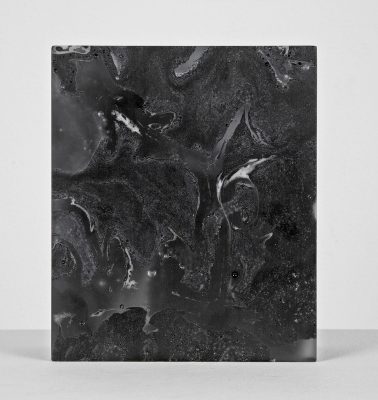 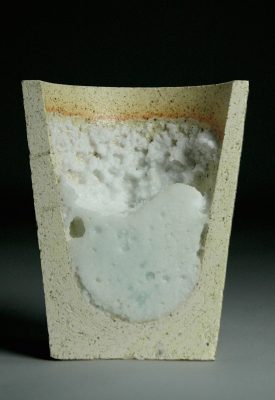 Marina Hanser is an Australian artist whose work explores ideas of revealing and concealing, deconstruction and reconstruction, and states of transition. Inspired by notions of loss, transformation and remembrance, Hanser uses cloth as a metaphor because of its ability to make things appear and disappear, and to suggest wounds, healing and transformation. In her studio, she combines traditional and non-traditional kiln casting, coldworking and pâte de verre techniques, translating the ideas of wounding and healing by filling carved voids with a paste of finely ground glass and using heat to restore the surface. She also creates a layer of clear glass, representing skin over a wound to reveal what lies hidden within.

During her residency, Hanser will focus on expanding her body of work and research, drawing influence from medical imagery, scientific and emotional concepts, material investigations, and her own personal experience with grief and loss.

Anna Riley’s work focuses on exploring the historic narrative of decolorization, and the emotional effects of material in our daily lives. Her research has taken her from coasts to quarries, harvesting raw ingredients from the earth to manufacture a series of site-influenced glass recipes. She has become deeply acquainted with the origin and production of glass, and interested in the “historical ambition for decolorization,” which is a process in which precisely chosen metal oxides can be added to a formula to counteract the original color, creating a mimesis of rock crystal.

During her residency, Riley will experiment with a variety of methods to transform brown bottle glass into clear glass. “The brown, or ‘amber,’ formula is intended to minimize internalized light to avoid degradation of liquid, making this challenge especially interesting,” Riley says. “By working toward converting it into clear material, the glass’ utility will be removed. What was once a glass engineered for a specific purpose is repurposed in service of ‘clarity.’” 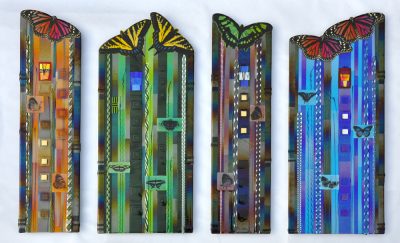 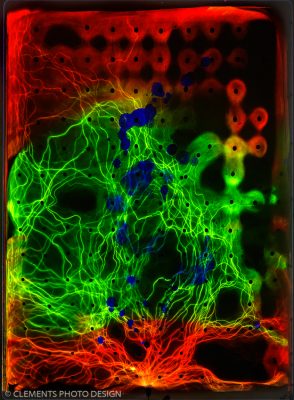 Mark Ditzler is a Seattle-based artist specializing in kiln-fired glass for art and architecture. Wayne Strattman is a noted scholar and artist who incorporates forms of light such as neon into glass sculpture. In September, Ditzler and Strattman will collaborate at The Studio for the Instructor Collaborative Residency. The two first met at 2015 at the Pilchuck Glass School, where Strattman was teaching a course on plasma neon.

Ditzler sees this residency as an opportunity for a “cross-over” between their styles of glassmaking. The two plan to create kiln-formed neon panels and glass sculpture, utilizing the techniques that initially brought them together. Elinor Portnoy is an Israeli artist whose work examines the fluidness of material. She designs processes that demonstrate the natural settling of matter, playing with the fine balance of disciplined and accidental results. In attempt to capture the liquidity of glass, she pours molten glass on top of metal structures, finding that metal conducts heat in a way that best captures the qualities of the process.

During her residency, which will be in collaboration with the Kohler Arts Center, she will explore this line of work further. First, she will fabricate cast iron molds according to pre-design 3-D molds, then she will bring them to Corning and pour hot glass over them. 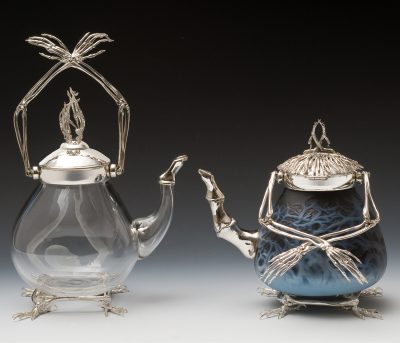 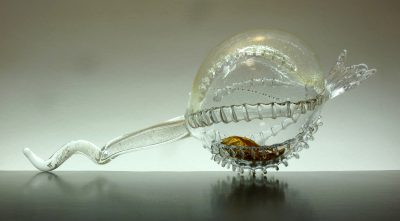 Wendy Yothers is a silversmith by profession, and specializes in restoration, prototype making, and production smithing for Tiffany & Co. and Kirk Stieff & Co. She is a professor at the Fashion Institute of Technology in New York. Yothers makes, designs, and restores teapots.

During her residency, Yothers will create a suite of fine art, visually eloquent glass and silver serving vessels based on a dinner party theme, exploring ways to combine traditional craftsmanship in silversmithing and glass in a 21st-century context.

With more than 20 years of glassblowing experience, François Arnaud’s work is inspired by ancient glassmaking techniques. The French artist is also inspired by dance and the movements of the body, and portrays it in his work. During his residency, he will further develop his work related to the human body. He will also explore the idea of instability and asymmetry in the body, and how it contrasts with utilitarian glass objects.