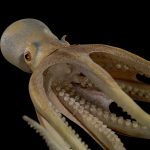 More than 500 miles from Corning, at the Virginia Aquarium & Marine Science Center in Virginia Beach, graphic artist and science illustrator Catherine Miller fell in love with Octopus salutii (Blaschka Nr. 573), one of the marine invertebrate models featured in Fragile Legacy: The Marine Invertebrate Glass Models of Leopold and Rudolf Blaschka. Catherine loves cephalopods and, as a science illustrator at the Aquarium, was immediately intrigued. “The Blaschka models represent what I aspire to as an illustrator of our natural world: art that educates people while also being beautiful,” explained Catherine. So she did what came naturally—she pulled out her colored pencils and started sketching. Her subject was one of the Aquarium’s favorite residents, Mena, an adult zebra shark. Her drawing landed in the hands of the Aquarium’s deputy director, Cynthia Whitbred-Spanoulis, who grew up near Corning and whose mother is a long-time volunteer here at the Museum.

Catherine’s drawing of Mena was brought to the attention of Museum gaffer Jeff Mack, who thought Mena might make for a beautiful glass sculpture. To begin translating Catherine’s illustration into glass, Jeff looked at photos of zebra sharks online making notes on form, volume, and defining characteristics to think about when translating a drawing into three dimensions. “I had to think about what glass colors to use and how they would react to the torch,” said Jeff. “And I had to experiment with the spotted pattern to learn how and when it should be applied in the forming process so that it wouldn’t look too distorted or stretched out.” Gaffer Jeff Mack works on his final iteration of Mena
in the Museum’s Hot Shop Amphitheater.

Jeff explained that visualizing the steps in the process, and drawing from his experience and knowledge of the material were integral to turning a drawing into a sculpture. He also had to consider whether the shark should be solid or hollow. “The form was fairly simple but there were lots of subtle qualities that made this shark uniquely a zebra shark,” Jeff said. “I found that the distinctive ridges along the body were some of its most defining characteristics, so I settled on blowing the form so that I could open it up and push the ridges out from the inside.”

He got to work; his first two tries gave Jeff the chance to refine his plan. “The first try was an experiment to test some theories about the spotted patterning. It didn’t work as I imagined, so I abandoned the that one half way through. The second was a bit too thick so I couldn’t push out the distinctive ridges as much as I wanted,” said Jeff. But he eventually found success on his third try after having thought through the lessons from his first two attempts. The glass shark is approximately one-third the size of an actual zebra shark, and features eyes, mouth, gills, fins, and the beautiful pattern of spots just like the real Mena at the Aquarium. 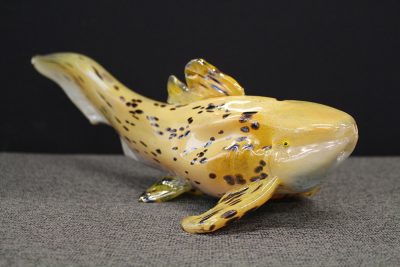 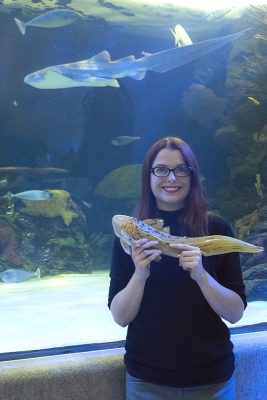 Catherine Miller holds the glass shark as the real Mena swims in the aquarium behind her.

The Virginia Aquarium is currently deciding on the perfect place to showcase Jeff’s creation. Catherine hopes that the real Mena and the glass version will inspire people to learn about the importance of sharks in our oceans. And Jeff and the team here at the Museum were happy to help.