The wedding of Princess Elizabeth and Philip Mountbatten took place on November 20, 1947, at Westminster Abbey. The princess, who would one day become Queen Elizabeth II, received over 2,500 wedding presents from all over the world. One such gift was this engraved Steuben crystal Merry-Go-Round bowl designed by Sidney Waugh and given to Princess Elizabeth by President Harry S. Truman and his wife Bess. In addition to the Trumans’ gift, Ambassador Lewis W. Douglas and his wife Peggy gave the couple 12 Steuben Audubon plates. 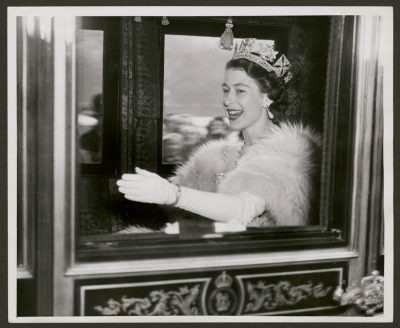 Princess Elizabeth waving from the royal carriage on her wedding day. 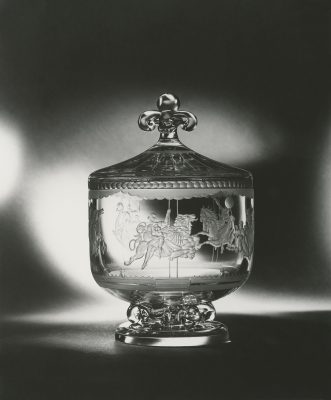 A 50-page scrapbook documenting the publicity of these gifts is in the Rakow Research Library’s Steuben collection. In the scrapbook are hundreds of newspaper clippings from papers throughout England and the United States. 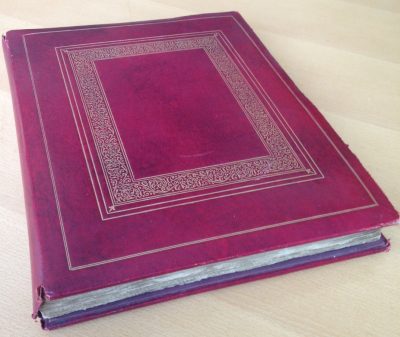 Scrapbook in the Rakow Research Library 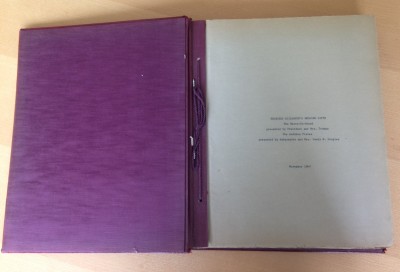 Scrapbook in the Rakow Research Library

A report prepared by Mary Fisher, the librarian at the Steuben Glass Library, and dated December 3, 1947, is also included in the scrapbook. She quotes a Buckingham Palace announcement in the introduction, stating that “Mr. and Mrs. Truman and Mr. and Mrs. Douglas selected Steuben Glass as an outstanding example of American craftsmanship and design.” The resulting exposure – documented in the clippings and articles included in the scrapbook – was “the greatest and finest publicity that is possible for Steuben Glass” according to the report. 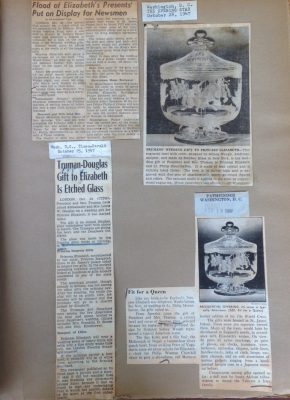 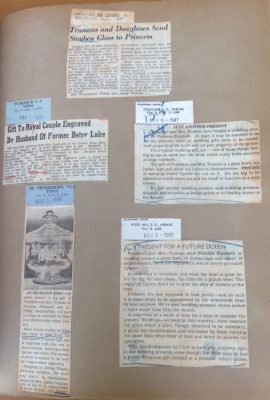 Other gifts presented to the bride and groom included a 30-inch silver flower vase from Portugal, a ruby necklace from Burma, a six-volume set titled The World Crisis written by Winston Churchill, and a carved teak chest along with five rolls of silk from Hong Kong.

Shortly after the wedding, a public charity exhibition was held to display the royal wedding gifts at the cost of 50 cents for admission. Back in the United States, Arthur A. Houghton Jr., president of Steuben Glass, received permission from Princess Elizabeth to exhibit replicas of the Truman and Douglas gifts, the proceeds of which also benefited charity.

These gifts were among many presidential gifts created by Steuben and given to foreign dignitaries.

The Rakow Research Library is open to the public 9 am–5 pm every day. We encourage everyone to explore our collections in person or online. If you have questions or need help with your research, use our Ask a Librarian service.