Antoni van Leeuwenhoek (1632-1723) was a Dutch scientist best known for his work on the improvement of the microscope. From there, separating fact from fiction can be tricky. Key aspects of his career are uncertain: When did he start using microscopes? How did he make his lenses? Did he really craft hundreds of microscopes, as he claimed, or was this self-promotion? Some of these question have been resolved – we now know how Van Leeuwenhoek made lenses, but others remain.

One enduring mystery of van Leeuwenhoek’s life is whether or not he knew his contemporary, painter Johannes Vermeer (1632-1675). Their lives are seemingly intertwined. They were born within a week of each other in October of 1632 in Delft, a small, but cosmopolitan city of 20,000 known for its tapestries, pottery, tiles and paintings. They lived within blocks of each other. The connection is so strong that many have pondered the implications of these giants of 17th century art and science being acquaintances: the conversations they might have had, their influence on their work. Yet, there is no conclusive evidence they knew or even met each other.

But, they must have known each other. How could the extraordinary work they were doing escape the other’s notice? This nagging notion has led historians to seek conclusive evidence linking van Leeuwenhoek and Vermeer, a search that has turned up several clues.

Delft’s Market Square as it looks today, Delft’s City Hall,
the Stadhuis where van Leewenhoek worked for several years
is at the end of the square. (“A view of Delft Central Market
Square with the Town Hall,” 4 May 2009, Herebedug.
Wikimedia Commons)

Van Leeuwenhoek and Vermeer lived within walking distance of each other just off Delft’s central Market Square. The tavern Vermeer owned, the Mechelen Inn, was on the square, its front visible from the Stadhuis, Delft’s City Hall, where van Leeuwenhoek worked as a city official. Could van Leeuwenhoek have stopped by the Inn for a drink after work?

The two men had friends in common, including Constantijn Huygens, an influential diplomat, artist, and poet who possessed a keen interest in microscopy and the natural sciences. Van Leeuwenhoek and Vermeer also shared an interest in optics and lenses. Van Leeuwenhoek made the lenses he used in his microscopes, carefully guarding his secrets. Many art historians believe Vermeer used lenses to achieve the photographic quality observed in his paintings. Could they have discussed optics with their circle of friends? 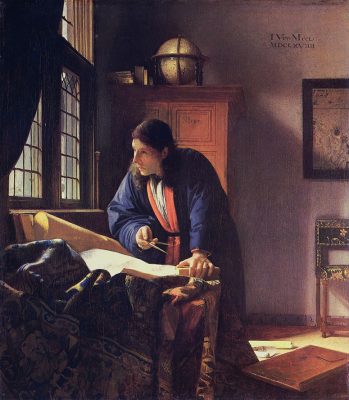 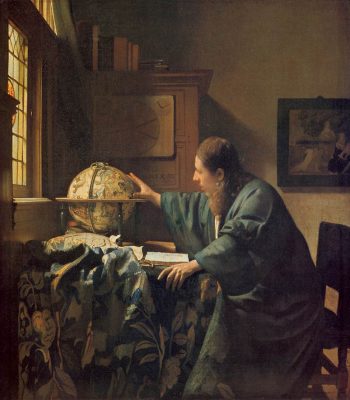 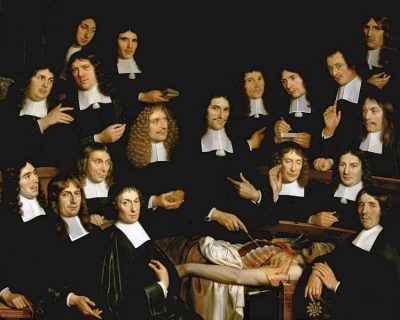 The Anatomy Lesson of Dr. Gravezande. Cornelis de Man, 1681. Gravesande is holding the scalpel. Van Leeuwenhoek is standing to his left with his hand over his chest.

Until someone in Delft discovers a letter in their attic from Vermeer to van Leeuwenhoek or a similarly revealing document comes to light, we will never know with certainty whether or not the two men knew each other. But, there is enough circumstantial evidence to make one imagine what interactions and conversations these giants of art and science may have had.