The first exhibition to explore Louis C. Tiffany’s glass mosaics—an extraordinary but little-known aspect of his artistic production—will be presented by The Corning Museum of Glass (CMoG) from May 20, 2017, through January 7, 2018. Tiffany’s Glass Mosaics, organized jointly by CMoG and The Neustadt Collection of Tiffany Glass, will combine works from both collections with important loans and specially designed digital displays to reveal how Tiffany’s mosaics reflect this aspect of his studio’s artistry and innovation in glass. The exhibition will feature nearly 50 works dating from the 1890s to the 1920s, from intimately scaled mosaic fancy goods designed for use in the home to large-scale mosaic panels and architectural elements composed of thousands of individual pieces of glass. Examples of Tiffany mosaics of such wide-ranging scope and scale have never before been displayed together, and the exhibition provides a unique opportunity to take in the breadth of this aspect of Tiffany’s work. Architectural mosaics still in situ will be presented through digital displays, showcasing new high resolution photography of these works recently captured by the CMoG team.

“We are thrilled to partner with The Neustadt Collection of Tiffany Glass on this groundbreaking exhibition. Thanks to the curatorial and digital expertise of both of our teams, this important aspect of Tiffany’s work is finally able to be explored in a meaningful way,” said Karol Wight, president and executive director of CMoG. “The history of glass mosaics extends back more than 3,000 years, and the permanent collection at CMoG is the perfect backdrop for contextualizing the work undertaken by Tiffany’s firm to popularize this technique in the United States.”

Mural, The Dream Garden, 1916. Tiffany Studios. Glass mosaic. Curtis Publishing Company Building (now The Curtis Center & Dream Garden; mural in the collection of Pennsylvania Academy of Fine Arts (2001.15, partial bequest of John W. Merriam; partial purchase with funds provided by a grant from The Pew Charitable Trusts; partial gift of Bryn Mawr College, The University of the Arts, and The Trustees of the University of Pennsylvania), Philadelphia, Pennsylvania. Photo: The Corning Museum of Glass.

The exhibition will reveal the process of creating a mosaic at Tiffany’s studios—through detailed watercolor studies and drawings to surviving glass sample panels and examples of completed work. Museum visitors will gain insight into the labor-intensive processes, including the selection of individual pieces of glass, which played a vital role in the overall aesthetic of the final product. Drawing on The Neustadt’s archive of Tiffany glass, objects on display will also include original examples of colored sheet glass, glass “jewels,” and glass fragments made for specific mosaics. There will also be loans from private collections as well at the Metropolitan Museum of Art, Virginia Museum of Fine Art, Museum of Modern Art, Chrysler Museum of Art, Haworth Art Gallery, Kalamazoo Art Institute, and the Charles Hosmer Morse Museum of American Art.

“Although Louis C. Tiffany is best known for his pioneering leaded glass windows and lamps, his mosaics are the culmination of his experimentation and artistry in glass,” said Lindsy Parrott, director and curator at The Neustadt and co-curator of Tiffany’s Glass Mosaics. “Indeed, the mosaics represent an exciting synthesis of his work in both leaded and blown glass. Using a rich variety of materials, including multicolored opalescent glass and shimmering iridescent glass, accented with three-dimensional glass ‘jewels,’ Tiffany’s innovations in glass established a bold new aesthetic for mosaics and contributed a uniquely American character to the centuries-old art form.”

The exhibition will also highlight the role of Tiffany’s turn-of-the-20th-century showroom, where he presented the finest examples of his completed work for his clients and the public. Photographs of the various workrooms were part of Tiffany’s marketing efforts and were used in both his advertisements as well as his marketing brochures. These “behind-the-scenes” photos emphasized that each object made at the Tiffany Studios was handcrafted, as opposed to mass produced. “Tiffany’s successful combination of art and business coincided with the rapid development of consumer culture in the United States,” said Kelly Conway, curator of American glass at CMoG and co-curator of Tiffany’s Glass Mosaics. “His impressive New York City showroom and clever, gorgeous displays of the company’s mosaics at world’s fairs, coupled with strategic marketing, sparked consumer interest and drove demand for high-priced luxury objects for the home.”

Many of Tiffany’s mosaic murals are still installed in their original settings, and will be represented by photographs. CMoG’s photography team visited 12 locations in New York State, Philadelphia, Baltimore, and Chicago, to capture detailed shots of these mosaic commissions, adding significant imagery to the field. The new photography will be presented in the exhibition through the use of digital displays, offering an interactive, immersive experience that will bring these important works directly to visitors at the Museum. Through digital interactives with zoom capabilities, visitors will be able to explore these mosaics in new and exciting ways: up close and at eye level, providing the opportunity for heightened appreciation of the material and the glass selection. 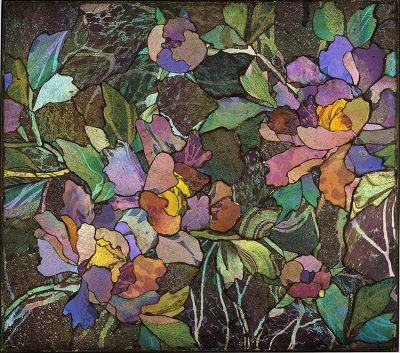 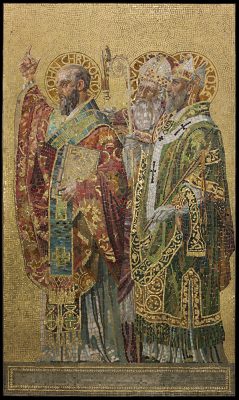 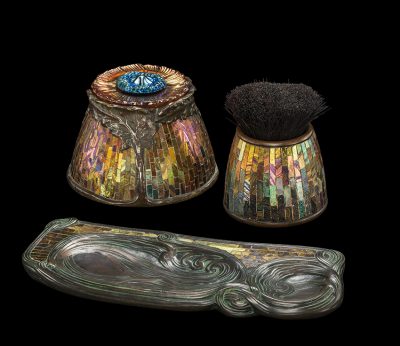 Tiffany’s Glass Mosaics will be accompanied by a new publication presenting the most comprehensive documentation and analysis of Tiffany’s glass mosaics to date. The volume advances scholarship in the field, and offers new perspectives for readers at all levels of expertise. Authors include the co-curators Conway and Parrott, Elizabeth J. De Rosa, independent curator Natalie R. Peters, independent art historian; Jennifer Perry Thalheimer, curator and collection manager, Charles Hosmer Morse Museum of Art; and Karol B. Wight, president and executive director, CMoG. The appendix was meticulously researched and compiled by Morgan T. Albahary, curatorial and collection assistant, The Neustadt. It is fully illustrated with new photography of many of Tiffany’s most celebrated mosaic commissions, including The Dream Garden in The Curtis Center in Philadelphia and Jacques Marquette’s Expedition in Chicago’s Marquette Building. Also included in the publication is a comprehensive appendix of all of Tiffany’s known public, ecclesiastical, and residential mosaic commissions, which serves as both a reference for researchers and a guide for anyone interested in visiting extant Tiffany mosaics.