George Loudon is a London-based retired banker, art collector, and author. In this guest blog post, he talks about his shift from collecting contemporary art to being drawn to 19th-century scientific curiosities. George Loudon with some of his collection.
Photograph courtesy of Apollo Magazine
© Kate Peters

A shared passion for contemporary art and for 19th-century didactic models may seem an unlikely combination, but in my mind they sit comfortably alongside one another.

After 20 or so years collecting contemporary works by young artists, I noticed in the 1990s that some artists were playing around with science and 19th-century scientific references. While visiting my daughter at Harvard, we saw the extraordinary collection of glass flowers by Leopold and Rudolf Blaschka, which really struck me in terms of what this sort of material could mean. After that, I started seeking out these and other didactic pieces banished to museum and university storerooms because institutions had taken them off display in favor of new technology.

I started buying interesting 19th-century scientific pieces, like reconstructed elephant bird eggs, skulls, or plaster models of heads and feet as they came up at auction and with dealers, not with any particular theme but mainly drawn by their aesthetic appeal. These fascinating objects had been made as teaching models or specimens to provide visualization of the explosion in science in the 19th century. They had lost their roles to photography and other methods of teaching but were exquisite in themselves. Gradually, the collection grew. In 2015, I published a book about my entire collection of 200 works, including 15 Blaschkas: Object Lessons: The Visualization of Nineteenth Century Life Science (Ridinghouse) with photographs by Rosamond Purcell. Recently, I found a Blaschka model of the serpulidea worm (below left) at auction in Berlin. 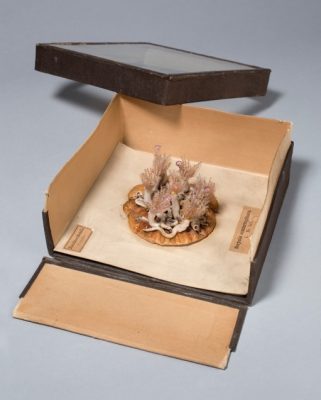 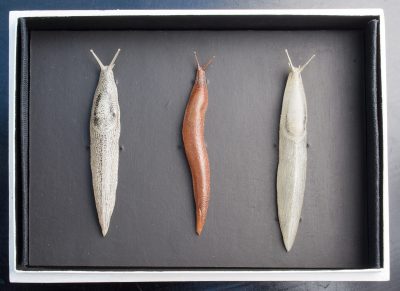 The first Blaschkas that I acquired were these three slugs (above right), then slightly grubby and loosely stuck to a bit of card. Careful cleaning and remounting revealed how lifelike they really are. The London-based dealer was at first reluctant to say how many he had or where he got them from. However, I didn’t have long to wait before he sold me a model of a sea anemone, and I later exhausted his stock by buying up his last Blaschkas: 10 models of slugs and snails, and a wonderful Portuguese man o’war. Blaschka models rarely appear on the market as museums do not deaccession them. I learnt that all his came from an English school that closed down its natural history department for financial reasons.

Over the last decade I have seen scientific antiques come more frequently into public view as items of beauty in their own right.

A conference on Blaschka in Dublin in 2006, sponsored by The Corning Museum of Glass, the Natural History Museum in London, and me, recognized that these objects attracted not only natural history specialists, but also artists and educated amateurs, all fascinated by the results achieved by these innovative artisan artists.