The Woodall Team working on the Great Tazza and a
two-handled vase Amblecote, England, 1891. CMGL 97796.

An exquisite collection of late 19th-century English scent bottles are the most recent gift to The Corning Museum of Glass from the Ennion Society, the Museum’s patron group. The 14 bottles represent a wide variety of cameo glass styles produced by Thomas Webb and Sons, a prolific and innovative glass house based in Amblecote, England. This collection of bottles demonstrates the variety of techniques used in the production of carved cameo glass, from the simple to the spectacular. Work by artists and engravers Jules Barbe, Harry A. Davies, and Fridolin Kretschman, who worked under the supervision of brothers Thomas and George Woodall, is included. These small scent bottles, ranging in size from less than 2 inches to nearly 8 inches, were used by fashionable middle-class and wealthy women. As portable accessories, they complement the Museum’s collection of large-scale English cameo glass, such as John Northwood’s replica of the ancient Roman cameo known as the Portland Vase, George Woodall’s Moorish Bathers, and the Woodall team’s The Great Tazza. The addition of the scent bottles makes the Museum’s collection of English cameo glass among the largest and most comprehensive in a public collection in North America.

Highlights from the collection include a teardrop-shaped, blue and white cameo scent bottle decorated with a swan and dragonfly which was signed “HAD” by artist Harry A. Davies, the only known work he signed and the only known cameo scent bottle with a signature. Another bottle is an elongated lie-down flask that has at least five layers of glass—white, yellow, red, and white interspersed with layers of clear glass—carved into a highly-detailed ornamental tapestry pattern. Two small 3-inch round bottles were likely gilded by Barbe and engraved and painted by Kretschman. One features a swan on one side and a Christmas rose on the other, and the other sets of plums and pears. 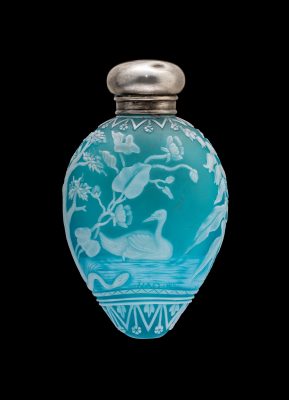 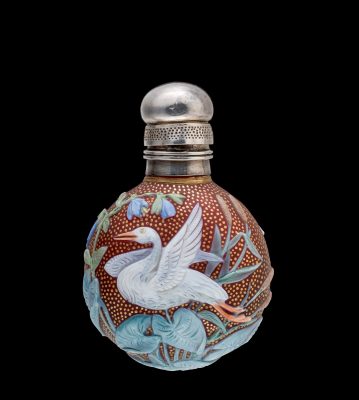 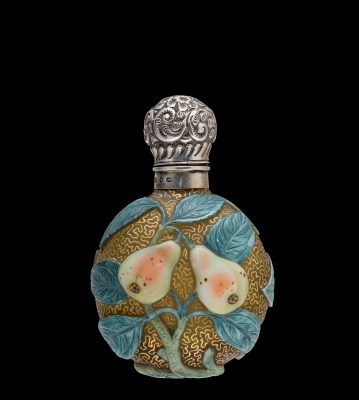 The bottles are now on view at the Museum in the 19th Century European Glass Gallery.