Here is Caitlin with her display box of the
Chondrocladia lampidiglobus.

When Caitlin Hyde decided to investigate Chondrocladia lampadiglobus, more commonly known as the “ping pong tree sponge,” she found herself going through a process that might be similar to how Leopold and Rudolf Blaschka prepared to make their models. Chondrocladia lampadiglobus has only been known to science for the last 10 to 15 years — so the Blaschkas never made a model of it because no one knew it existed in the late 1800s.

“I wanted to learn something new in the same way the Blaschkas would have so that I could mirror their working process,” explained Caitlin. “And I wanted to choose an animal and make a model that would not only have a story to tell, but also convey scientific information.” And Chondrocladia lampadiglobus has an interesting story … this particular species of sponge is one of a group of about 30 in its genus that are carnivorous sponges. This innocent-looking sponge likes to dine on small crustaceans.

Once Caitlin found her subject, she got to work studying its details by sketching it. In the early years, the Blaschkas worked from published illustrations of various marine creatures. Over the next several decades, they began collecting some of their own specimens and made drawings as part of the design process for their glass models. Caitlin said, “I had the benefit of access to the Internet for descriptions and photographs of my sea sponge. And the drawing process helped me understand the form and details of Chondrocladia lampadiglobus.” Details such as the hooked spicules that make up the surface of the balloon-like structures. Spicules are microscopic, prickly elements that form a Velcro-like texture, trapping the tiny crustaceans that the sponge eats. Spicules from different sponges have different shapes, which Caitlin represents in her “Investigating the Blaschka Legacy” box. 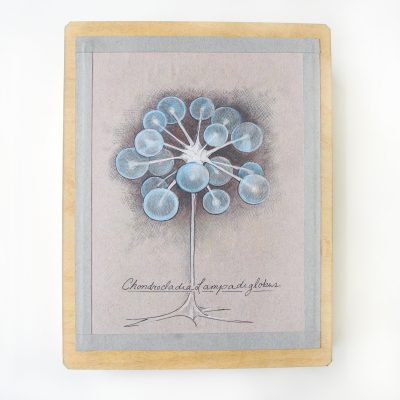 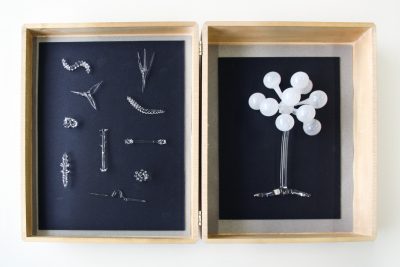 Caitlin has been working with glass for more than 20 years, but what she found most interesting about her investigation is that the Blaschkas didn’t limit themselves to using just glass in their models. “Their glasswork was meant to convey information rather than to be decorative,” Caitlin said, “and they used whatever material would best convey that information. Their use of other materials allowed them to make more complex and detailed objects.”

“The Blaschkas’ use of wire, paints, and various types of adhesives opens up all sorts of possibilities,” explained Caitlin. Exploring new materials and incorporating new techniques is something Caitlin would like to carry forward into her own work.

Learn more during the special Investigating the Blaschka Legacy flameworking demonstrations, daily at 11:45 am through January 8.