Back to London, and to an offsite storeroom, holding back my 70-pound rolling suitcase as we go down the hill at Greenwich, and lugging it up again at the end of the day. Who says scholarly work isn’t physically demanding?

As we are finding everywhere, the museum staff members at the National Maritime Museum are incredibly helpful and flexible. We find a suitable place to set up the optical gear, and rig up cloth and paper to cover the windows to cut down on stray light. Alas, a key component, a holder for the test mirror, has failed due to a stripped screw. Of course, it’s not a standard size, and getting it out challenges the ingenuity of the technician there. An hour later, and we’re off and running. I think he enjoyed the challenge; I hope so, because he’s given an hour to solving my problem rather than to working as he had planned. It’s a good lesson in how to treat one’s guests. I make a note to remember that for the future. 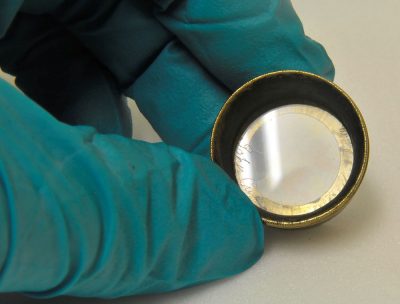 The signed lens of a unique John Cuff telescope.

Today, we have just three items to examine, which is good, given that it’s taken longer than usual to set up. The first is a telescope made by John Cuff, known for his important innovations on microscopes; we have no other examples by him. And he did something very nice, signing the lens of the telescope. If only everyone did that! Don’t try that at home, though. Early telescopes are often signed at the edge of the lens, which is covered by a paper ring holding it in place. The signature doesn’t impact the quality of the lens or of the image. 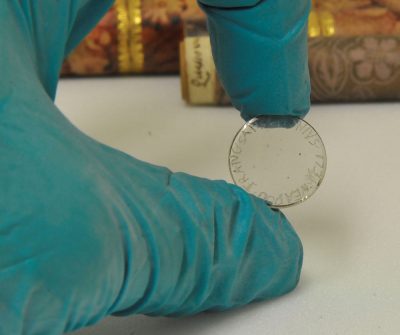 The signed lens of an Italian telescope.

We see the same signature location on another telescope, a very elegant one made in Naples in 1730, by someone we haven’t encountered before. We have some work to do to identify this maker.

The prime reason for this visit is the third telescope, made by Jacob Cunigham in 1661. It’s the oldest dated telescope in Britain, but the German words “NAHE,” “WEITH,” and “OVERSICHTIG,” indicating how far to extend the draw tube in order to provide focus for people of different vision, indicates a more complex, and interesting story, which is still being researched by our Dutch collaborator, Huib Zuidervaart. 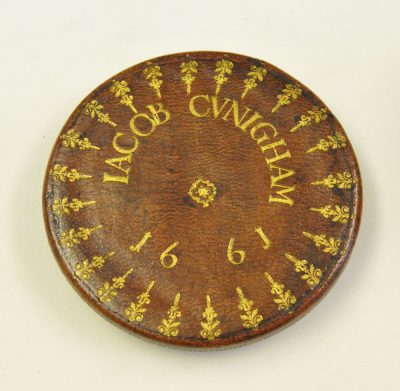 The signature of the oldest telescope in Britain.