Dr. Drew Harvell is a professor of marine ecology and biodiversity at Cornell University in Ithaca, New York. Her book, A Sea of Glass: Searching for the Blaschkas’ Fragile Legacy in an Ocean at Risk, explores how some of the Blaschka species are faring in today’s seas. Its recent release was accompanied by nicely-illustrated articles explaining the book, including slideshows of glass and living critters. Harvell will speak at the Museum’s Annual Seminar on Glass on October 16. My passion is the spineless life in the sea: sea jellies, sea anemones, squids, and octopuses. I’m lucky to be curator of Cornell’s collection of glass masterpieces, which inspire appreciation for our ocean’s shimmering invertebrate diversity. My quest is to find the living matches to Leopold and Rudolf Blaschka’s spectacular glass sea creatures as a time capsule of species that were plentiful in their time. What better place to find the living matches to the Blaschka glass than Friday Harbor Labs, positioned in the unusually diverse Salish Sea, just north of Seattle, Washington?

Confirming whether we have found a critter that is exactly the same species as one of the Blaschka models turns out to be challenging, and requires higher level work with invertebrate systematics and, sometimes, even genetics. To start with, two-thirds of the species names that the Blaschkas used in 1885 have changed. Our first job then was to research every species name, so we could even know where to find their modern representatives. Colleague Jim Morin and I put our students to work tracking down the current names. The Blaschkas would be pleased to see us using their collection for teaching.

Three of my favorite matches from our search in the Pacific Ocean this spring are the swimming anemone (Stomphia coccinea), the predatory sea mouse sea slug (Aeolidia papillosa), and the tubeworm (Serpula vermicularis). The swimming anemone and tubeworm are long-term pets, living in the sea water aquaria at Friday Harbor Laboratories, so they were not hard to find. Stomphia is well known as the swimming anemone and will release its grip on the bottom and swim away if it detects a hunting starfish. Our sea mouse slugs are often in tide pools, eating the elegant green anemone (Anthopleura elegantissima), also a close match to a Blaschka species (Anthopleura ballii). To treat the oceans fairly, we found an earlier match in the Atlantic while teaching at Shoals Marine Lab on remote Appledore Island. While splendid in both glass and alive, and a fierce predator on anemone relatives, the coronate sea slug (Doto coronate) is as small as a lady bug. 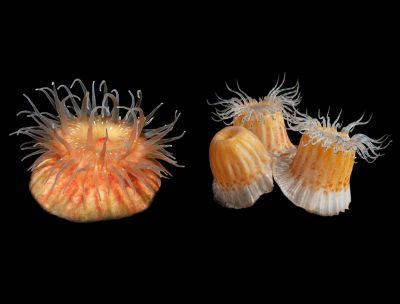 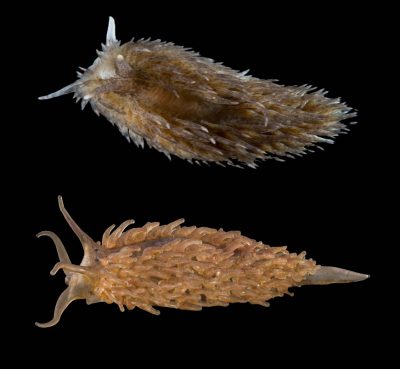 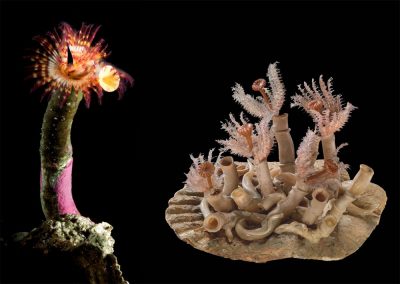 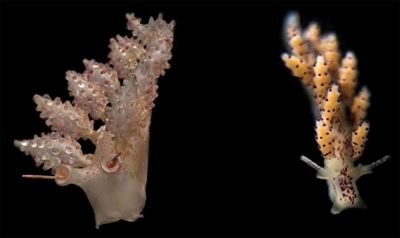 The cold water coral Balanophyllia elegans is a close match to Balanophyllia europaea and is common on underwater rock walls. It is the focus of new research on effects of ocean acidification on cold water corals. The glass models can draw attention to the risks faced by invertebrates in our changing ocean. Some sea slugs, like the shelled pteropods, are actively dissolving in the now acid waters of Puget Sound which have accumulated too much excess carbon dioxide. Cold water corals like Balanophyllia could also be among the next impacted. The Blaschka glass masterpieces are a reminder that marine biodiversity is as fragile as glass.

The award-winning short film Fragile Legacy chronicles our searches for Blaschka matches in Indonesia, Hawaii, Friday Harbor, Maine, Italy, and Spain. Our videographer, David O. Brown, hopes to make a full- length documentary and just filmed with us for the bigger project. We worked hard to find matches this spring here at the labs while we were teaching Invertebrate Biodiversity to our Cornell students.