Cambridge University was home to Isaac Newton for 35 years (1661-1696). During that time, he famously — and incorrectly — stated that it was impossible to stop refracting telescopes (those with lenses) from introducing colored fringes. So he made a reflecting telescope, one with a mirror to gather light. In fact, he made three of them, but none of them survive. 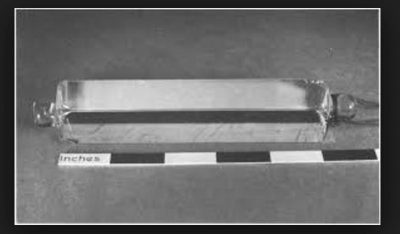 To carry out his experiments with light, Newton made a triangular prism, which survives in Cambridge University’s Whipple Museum, an impressive collection of scientific instruments, including telescopes.

One can’t park near the Whipple, so a car park is our only option. And a torrential downpour hits as we unload, so we have to be especially careful to dry off before handling the telescopes today. 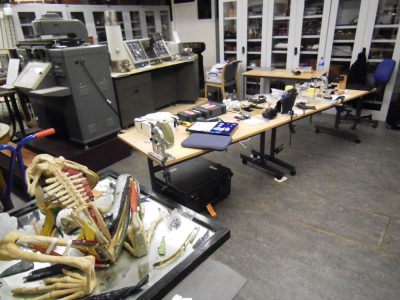 Our headquarters at the Whipple.

By now, we were getting pretty good at setting up quickly, and in unusual settings. This time, we are in a storage room, surrounded by 20th century physics machines and a 19th century papier-mâché model of a frog, among other interesting objects. It’s sometimes hard to stay focused in these surroundings.

As always, we work with the local curator, this time Josh Nall, to develop a list of instruments we want to see. We develop our own system of triage: 1. indicates must see, 2. must see if we have time (ha!), and 3. we could take a look if somehow time stands still for a very long while. We usually end up with a few 1s, and then 1.5s, 1.9s, and sometimes even more decimal places that reflect the lateness of the hour far more accurately than any finely-tuned evaluation system. But it works for us.

Hidden among our 1s this time is an instrument previously not identified but which we discover is made by the best 17th century maker, Giuseppe Campani. We’ve earned our keep, and it’s only the first one we look at. This bodes well.

We examine more treasures, by Brandreth, Hurt, Mann, Cock, and, finally, the first telescope acquired by the Whipple Museum founder, Robert Stewart Whipple. About it, he wrote: “I little thought when I bought an old telescope, for the sum of 10 francs from an antique shop in Tours in 1913, that I was embarking on the slippery slope of collecting.”

It’s from about 1750, and probably the oldest telescope made by Leonardo Semitecolo, who made a prodigious number of telescopes for the consumer market. We spend a lot of time trying to take a picture through it of Mr. Whipple’s portrait. Too much time. Way too much time. We hope you enjoy it. 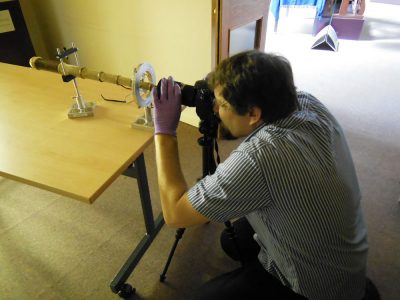 Marv setting up the perfect shot

Looking at the set-up and the target. 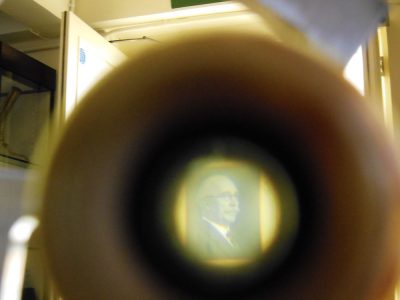 Mr. Whipple, seen through the first telescope he collected