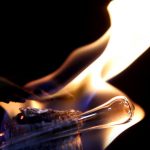 When they appeared in the early 1600s, telescopes quickly revealed details of distant worlds, but microscopes provided access to tiny worlds much more slowly. The lenses for microscopes required more precision, and finer skills of the artisans who made them.

In the preface to Micrographia (1665), Robert Hooke (English, 1635-1703) described one microscope lensmaking technique. After reading this preface, Antoni van Leeuwenhoek (Dutch, 1632-1723) decided to make his own microscopes and lenses. Of the more than 500 examples he made, only 12 survive, one of which is on display in the exhibition Revealing the Invisible: The History of Glass and the Microscope. Historians, scientists, and glass experts are still trying to understand his techniques, using evidence from his letters, his contemporaries’ descriptions, and by carefully examining his microscopes. Currently, we believe that van Leeuwenhoek experimented with three methods to make these tiny glass lenses.

The exhibit team translated these historical methods in videos that appeal to visitors who are unfamiliar with lensmaking, grinding glass, or flameworking, as well as to scholars who wish to learn more about historical scientific techniques. By recreating these three processes, we are now able to explore them in more detail, and hope to contribute to existing scholarship.

The first, earliest technique used by van Leeuwenhoek copies the method described by Hooke. This approach produces lenses by drawing glass rods into thin filaments, and then poking them with a needle or just letting surface tension act to form a tiny bead. van Leeuwenhoek commented that these lenses were of little value and he soon stopped making them. As a result, none of these examples survive. In the video, expert flameworker Eric Goldschmidt demonstrates this technique.

Eric notes: “Before being presented with this project, I hadn’t realized that these early lens making techniques were so dependent on lampworking. The biggest challenges for me had to do mostly with the melting technology we were using.”

The resulting video looks flawless, but there were many challenges with lighting and air flow. Eric explains, “There is a big difference between a good glassmaking setup and a good setup for filming glassmaking. In order to deliver the best production values for filming, we put a clean, new piece of sheet metal on the tabletop, and we poured as much lighting on the workspace as possible. This combination of additional light and a reflective surface on the table made it difficult to see the flame itself as accurately as I would have preferred.” Eric continues, “Making these lenses, particularly on such a small-scale, requires very precise heating. I had a tough time finding the temperature gradient around the edges of the flame. Using the edges of the flame gives me the most control over fine detail work. Also, while the bellows did deliver a fairly even airflow, there were times when my pumping rhythm was off a little bit, and the flame would change its shape. The shape would change from a triangle pointing away from me to a billowy vertical flame that sometimes blew in my direction. In my research on these benches, I noticed that most of them used a piece of sheet metal that would lay a few inches over the lamp to trap heat, airflow, and keep the flame from billowing back at the crafter. We did not use such protection in the interest of showing as much of the flame and airflow as possible in the film.”

Van Leeuwenhoek’s second technique imitated the strategy used to make telescope lenses, that is, by taking a piece of clear glass, grinding it to the desired shape, and then polishing the surface. This is a challenging task for telescope lenses, which at the time usually measured from 25 to 75 mm (1 to 3 inches) in diameter. It is downright daunting for microscope lenses that measure 1 to 2 mm (less than 1/10 inch) in diameter. That small size means that the final lens is sandwiched in place between two plates rather than in a circular holder. All but two of the surviving van Leeuwenhoek lenses were made by this technique, including the original on display in the exhibition.

Harry notes that he was fascinated by this opportunity. “It had a mystery novel feel because the process was not fully documented. It was challenging, first, because there were gaps in what we understood about the process. Marv was great in holding my hand in understanding how it was used. He pointed out research succinctly and helped me digest the information, then move on to make it. Secondly, the scale was challenging. Something so small was daunting for me. Work so small is immediately affected by a little grinding. This also heightened the interest for me. Would the process and techniques we were using actually work? I conceptually and generally knew about lens making, but I had never done it. Artistic grinding and polishing for effect is not like thinking about making a lens that is really part of a microscope.”

Eric describes the challenges specific to this approach: “The bellows bench flame can be adjusted a bit for some different flame shapes and sizes, but it was difficult to create a truly ideal flame for the blown lenses. For such an object, I would have preferred a wider flame with a more balanced temperature throughout. The bellows bench produced a much hotter temperature in the very center of the flame than it did towards the edges. It was difficult to heat the thin hollow forms as evenly as I would have liked under these conditions.”

We are delighted that we could use our in-house glass expertise to illustrate all three of van Leeuwenhoek’s methods on video, which has not been done before. Both Eric and Harry note that these processes were not fully documented, and had to fill in some gaps based on their experience. For example, Harry points out that “making [the lens] bigger allowed us to see what was happening. It was a great experience that opens the door to new experiments in the future.”

That experimentation will be informed by what we’ve learned in the process of making these videos. Harry experienced some discrepancies that he suspects were “due to a genuine lack of documentation, or perhaps some descriptions of a specific glass process by a non-glass person were lost in translation. It’s also possible the processes were just not described correctly or perhaps were interpreted incorrectly by me/us. There is a difference in the way that historical people talk about things and the way that we talk about them today.”

Eric noted, “I didn’t find any great discrepancies with the techniques as they were described by historians. However, I do believe the process for making the blown lenses could have been expedited with some adjustments to the process. It was suggested in some of the historical texts that each lens required a fresh length of tubing to be melted in half, and either side of that could be prepared into a lens. I would propose that one could simply continue to create lens after lens from the end of the same long tube. It was also never clear to me from historical accounts, exactly how the blown lens was truly finished into a functional lens. It seemed there was a crucial step left out of the accounts. How is the bubble properly removed from the rest of the tube from which it is blown? I found a couple of ways to make it happen on my own, but I did not see such solutions in our research.”

Ultimately, we hope to recreate a 17th-century-style lathe and shrink the scale to see if we get the same results seen in the video. Also, taking the glass all the way to polish is essential in recreating this process. We hope to explore these techniques in enough detail to add to the scholarship on historical lens making.