Alexia Pratt has been a teen volunteer at The Corning Museum of Glass for two years and is a member of the Teen Leadership Council during its inaugural year. She is a sophomore at Corning-Painted Post High School. Author Alexia Pratt at The Corning Museum of Glass.

You guys have been to The Corning Museum of Glass before, right? Well, now imagine it run by a bunch of teenagers! I’m just kidding, but this past summer, CMOG did give teens a chance to play a larger part in the Museum. The three coordinators — Jessica, Mieke, and Myrna — brought together a really awesome team of Teen Volunteers, Junior Scientists, Explainers, and Junior Curators for a special mission. We called our little team of 14 the Teen Leadership Council, or the TLC for short. Pretty official sounding, right? Our mission: to plan and organize, to learn, and to represent teen voices in the Museum. All that sounds straightforward, but it’s more work than you might think.

Our largest project involved organizing a recognition event for the numerous teen volunteers. We put together a party complete with tacos, ice cream, ticket raffles, and games. We even planned for a Dunk Tank but, unfortunately, it was rained out. We also had to come up with two “Objects of the Week” and two blog posts (this is the first). Sometimes trying to plan things with a bunch of teens can feel a bit like herding cats, if I’m being honest, what with all the different opinions and ideas all at once. I think everything worked out great though. In the end, we all remembered what was important, and planned a great event for the teens. We also picked out some great subjects for the Museum’s blog. Look for those soon. 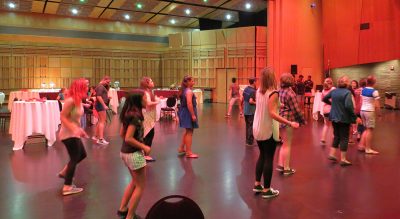 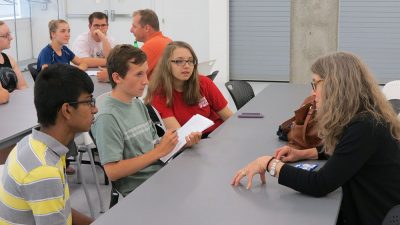 Members of the TLC meet with Museum staff to learn about their work.

It wasn’t all work though; we also got to take some fantastic behind-the-scenes tours of the Museum. Our group got to see things most people at the Museum, even those who work there, have never seen before. We also got to meet and talk to people from departments all over the Museum, learning about their jobs and their journeys there.

Overall, I feel as though the Teen Leadership Council was a great success for its inaugural year. We achieved our set goals and got to learn a whole bunch about the Museum at the same time. I know that most things get better as they age and I think the TLC will be no different. I hope next year’s teen leaders will get to enjoy it as much as we did; so here’s to many more years of the Teen Leadership Council!