Because our next week involved stops at Oxford, Cambridge, and London, we decided to rent a car, or rather, hire a vehicle. Using a manual transmission while driving on the “other” side of the road proves to be a good mental exercise, and we arrive safely after negotiating Oxford’s labyrinth of one-way streets. 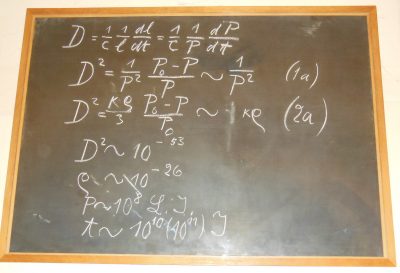 The Museum of the History of Science houses an incredible collection of scientific instruments. If that’s not enough, it holds claim as “the world’s oldest surviving purpose-built museum building”, built in 1683; it became a history of science museum in 1924. Among its treasures is this chalkboard, used by Albert Einstein in 1931, with his hand-written equations still on it.

Our two-day investigation begins with some difficult choices. A reasonably early telescope, from 1675, doesn’t make the cut because it’s typical of the period, and has little new to tell us (or so we think). One from 1695 does, as it is signed by its maker, “Will Longland, London, 1695.” 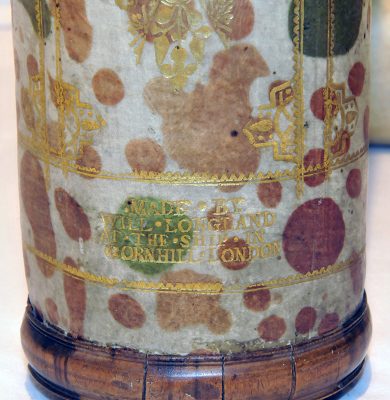 It, too, is typical of the period but very different from telescopes from other eras. The skinny end, at the left, is aimed at the sky; the fatter end is placed near the eye. The three lenses of the eyepiece are located one at the end of each of the three thickest tubes; it is a bit of a challenge to extend each tube to make a sharp image.

Although we find no examples of unique instruments, we did not expect that either. Most research isn’t like that; instead, involves careful documentation of lots of material that when studied, reveals patterns of consistency and sometimes subtle details of change. 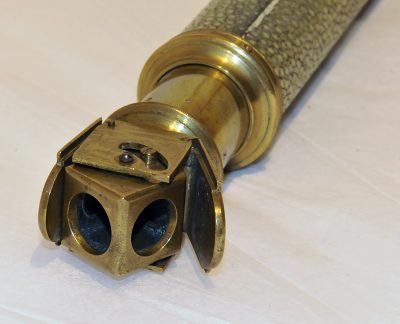 We do catalog one unusual piece of which we know only three examples. It features two objectives that can be easily interchanged by simply sliding the square head from one position to the other. A simple extension of the one drawtube provides focus, and a change of magnification. It’s an ingenious, if somewhat gimmicky, innovation!

And we see an interesting transitional form dating from 1710, one with old-style Galilean optics, plain draw tubes, and ivory fittings, but also including a new aesthetic that will become more common in the 1740s, a shagreen cover on the main barrel.

All in all, it’s an intensive two-day visit with old instruments and, just as important, a chance to collaborate with dear colleagues and friends.